Harry Myo Lin, a young activist from Mandalay, Myanmar, talks to The Elders’ team about his efforts to help advance human rights and build interfaith peace in his country.

“I think a root cause of hate speech is the lack of knowledge and trust between each group. I also think that some people misuse people’s love for their religion; some use it as a political tool.”

As Myanmar proceeds in its transition from decades of military rule to a more open, inclusive and democratic society, we asked grassroots activist Harry Myo Lin about his efforts to help build tolerance and trust in one of Asia’s most diverse countries.

Elders team: What prompted you to become a peace and human rights activist?

Harry Myo Lin: Perhaps because I read a lot of politics books when I was young, I have always thought that I should be doing something positive for my country. I first got involved in activism during the Saffron Revolution in 2007. I was studying at Yandanarbon University in Mandalay and, like many others in the country, followed the monks out into the streets to demonstrate against the government. I then worked to help deliver aid to displaced people in Kachin and Shan states from 2008 to 2012. Since then, I have been working on campaigns to promote peace, human rights and interfaith dialogue. 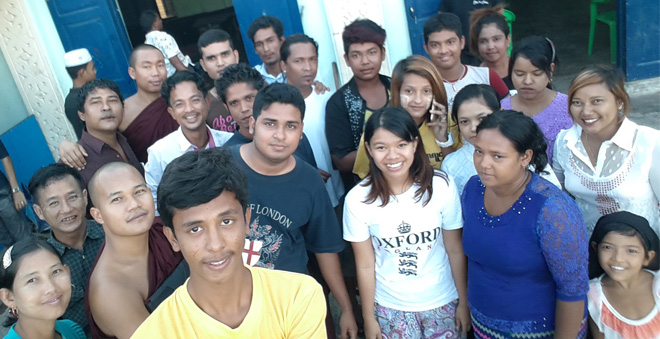 Harry Myo Lin with Buddhist and muslim youths after a visit to Mosques in a village near Mandalay where he and The Seagull are working on a project called 'Building Pluralistic Society'.

Elders team: You also help foreign scholars and journalists to speak with monks.

Harry Myo Lin: I come from a Muslim community but have been interested in Buddhism since I was at university. I studied Buddhism under a monk and have always had good relationships with monks. So when foreign visitors come to speak with the monks in my area, I am often asked by the monks to serve as the interpreter. It works well; we have mutual respect and understanding.

Elders team: How do you build trust and foster understanding between people of different faiths?

Harry Myo Lin: Interfaith trust doesn’t just happen in a dialogue between religious leaders. We also need to build trust between people by organising interfaith activities at the community level, ensuring that people from different religions have contact with one another. When people are engaged with each other and see that every community is suffering, they gain more trust and understanding.

Harry Myo Lin: Our country was closed off for a very long time. We didn't really have any exposure to other communities, to real news and to what’s happening around the world. I think a root cause of hate speech is the lack of knowledge and trust between each group. I also think that some people misuse people’s love for their religion; some use it as a political tool.

Elders team: Can you describe the work that you did with the Panzagar (‘flower speech’) campaign?

Harry Myo Lin: The Panzagar campaign against hate speech is organised by Nay Phone Latt, a well-known blogger in Yangon. I found out about Panzagar and wanted to help the campaign spread throughout the country. I got in touch with Nay Phone Latt and the other organisers and they supplied me with the campaign materials to bring Panzagar to Mandalay. Together with other civil society and religious groups, we promote ‘right speech’ in the context of freedom of expression – we put flowers in our mouths to symbolise this. We also used Facebook and worked with monastic schools and other religious schools to educate young people to reject hate speech. 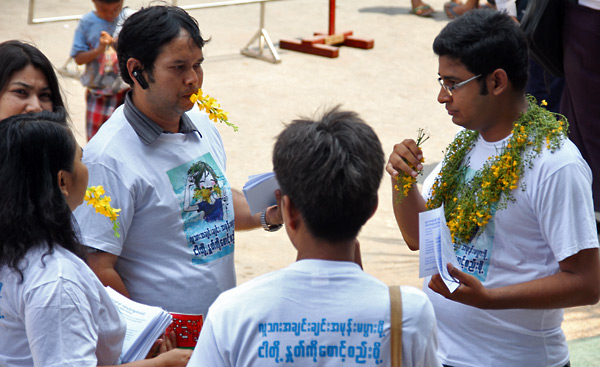 Elders team: You founded the civil society organisation ‘The Seagull’ in 2014. What does it do and why did you choose this name for the group?

Harry Myo Lin: Yes, I started ‘The Seagull’ with some friends in early 2014. Our group works to promote peace, democracy and development in the country. We also speak out against human rights violations and organise awareness campaigns.

Our name comes from the book Jonathan Livingstone Seagull [about a seagull who refuses to conform and is ostracised from his flock]. Most of my friends and I have faced scepticism from our families and others in society about our work – some don’t think that we’re doing the right thing. We named our group ‘The Seagull’ after this book as we see ourselves as that seagull, flying higher and higher.

Harry Myo Lin is a peace and human rights activist and educator based in Mandalay, Myanmar.

"Myanmar’s newfound political freedoms have created a space for democratic aspirations – but also, sometimes, incendiary language."
Lesley-Anne Knight, CEO of The Elders, highlights efforts by faith leaders and others to promote religious tolerance i

"We hope we have adequately reflected the views expressed by many people to The Elders regarding the continuing challenges faced by the Myanmar people."The Elders' CEO Lesley-Anne Knight introduces the report from The Elders’ recent visit to Myanmar.