Gaza one year on: your questions answered (part two)

In the second part of our Q&A on Gaza Katleen Maes, Head of the Gaza Sub-Office of OCHA, and Tania Hary, Deputy Director of Gisha answer your questions.

Has it become even less likely that the disagreements between the Israelis and the Palestinians will be resolved now that many other related parts of the world are falling ever deeper into seemingly overwhelmingly intractable conflicts? [Asked by Lloyd on Facebook]

"In the months prior to the 2014 war, many of us warned that an escalation of violence was inevitable unless the daily lives of people in Gaza improved, including people’s ability to travel freely and to make a living. Unfortunately, these predictions became a reality and the warnings about another round of escalations have not died down since as none of the root causes of the conflict have been addressed."

Tania: It’s true that the seeming intractability of the Israeli-Palestinian conflict has led to a certain fatigue or despair on the part of world leaders and the international community. But it is an illusion to think that there is such a thing called the status quo, as the situation on the ground, especially to those of us living here, is changing rapidly. Many civilians around the world, and in the region in particular, are exposed to the dangers and traumas of conflict.

We have an obligation as members of the international community not to lose hope and to continue to try to create positive change in the ways we can, each from his or her position or point of view. I believe the pursuit of respect for human rights and the imperative to meet humanitarian and development needs should take place in parallel to efforts to advance a long-term, sustainable solution to the conflict as all these elements are interconnected. Please don’t lose hope that there are solutions out there and reality can be different!

Katleen: It is clear that the situation in the Middle East region is increasingly complex and that the humanitarian needs are growing in the entire region. However, the Israeli-Palestinian conflict continues to feature prominently on the agenda of the international community, because even though occupation is intended to be temporary, Israel’s occupation is approaching its 50th anniversary.

The situation in the oPt essentially is a man-made humanitarian crisis and an end of the occupation would mean that Palestinians can become economically independent and self-sufficient without the need for humanitarian assistance. Therefore, the international community and actors in Israel and the oPt alike have an even greater responsibility to work towards a situation where both Israel and Palestine comply with international law and human rights law to ensure that the rights of people in Israel and Palestine are respected and protected.

In the months prior to the 2014 war, many of us warned that an escalation of violence was inevitable unless the daily lives of people in Gaza improved, including people’s ability to travel freely and to make a living. Unfortunately, these predictions became a reality and the warnings about another round of escalations have not died down since as none of the root causes of the conflict have been addressed.

"This funding gap means that life-saving interventions, such as the prevention of malnutrition of children or giving people a safe home might not take place."

In a climate where political progress appears a real challenge, it is crucial to continue supporting not only the political process, but also interventions that make a qualitative improvement to people’s lives. To cover the basic needs in oPt in 2015, local and international organisations providing humanitarian assistance need US$705 million, some 75 per cent of this is for Gaza. At the moment, these organisations have received US$390m, or about 45 per cent, of the funding. This funding gap means that life-saving interventions, such as the prevention of malnutrition of children or giving people a safe home might not take place.

Why does the UN allow Israel to treat Palestinians like second-class citizens? [Asked by Jonas on Facebook]

Katleen: The starting point for many working in oPt, including the UN, is that we are working in a context where there is insufficient respect for international law, which has severe humanitarian consequences. There is credible evidence of violations of Palestinian human rights by a range of actors, including Israeli authorities, Palestinian authorities, Israeli settlers and Palestinian armed groups and this situation needs to be reversed. This can be done if there is a willingness to implement the various UN Security Council and UN General Assembly resolutions by the UN member states.

One of the guiding resolutions for the work in the oPt is UNGA resolution 67/19 of 29 November 2012 which urges all States and the specialised agencies and organisations of the United Nations system to continue to support and assist the Palestinian people in the early realisation of their right to self-determination, independence and freedom.

In the oPt, as elsewhere in the world, OCHA publishes a weekly report that looks at whether all parties of the conflict who are responsible for ensuring that the civilian population is respected and protected, do so. In the aftermath of the 2014 war, the UN launched several inquiries into the conduct of hostilities, including the UN Secretary-General’s Board of Inquiry and the United Nations Independent Commission of Inquiry on the 2014 Gaza Conflict, which concluded that:

“The persistent lack of implementation of recommendations – made by previous commissions of inquiry, fact-finding missions, United Nations treaty bodies, special procedures and other United Nations bodies, in particular the Secretary-General and OHCHR – lies at the heart of the systematic recurrence of violations in Israel and the Occupied Palestinian Territory.

Bearing in mind this wealth of guidance, the commission will not elaborate an exhaustive list of recommendations, which would repeat concerns registered by other bodies. Rather, the commission calls upon all duty bearers to implement fully all recommendations made by the above-mentioned bodies without delay in order to avert a crisis similar to that of summer 2014 in the future.”

Do you foresee a Middle East Peace Process based on tabula rasa diplomacy which addresses fresh water sustainability in the Middle East? [Asked by Philip on Facebook]

Tania: It certainly behoves our leaders to work together to address common interests and challenges, such as water conservation, environmental protection, and energy supply. One might hope that politics could be put aside for the sake of common concerns but unfortunately, this is not the case. While it’s clear that a political resolution to the conflict as a whole is an imperative, we can’t afford to wait for the peace process to restart or end to confront the challenges that face us today.

Gisha has drawn attention many times to the fact that Gaza dumps untreated and partially treated sewage by the millions of litres daily into our shared sea, due to lack of properly functioning sewage treatment facilities and lack of energy resources. During Operation Protective Edge, we led the Israeli human rights community in calling on the Israeli authorities to protect and facilitate repair of critical civilian infrastructure. As a private Israeli citizen, I would certainly support any initiative that calls on cooperation to advance shared environmental interests. As a human rights organisation, we hope to advance a principled approach as well, not just based on common interests like the environment or economy, but on rights and responsibilities. 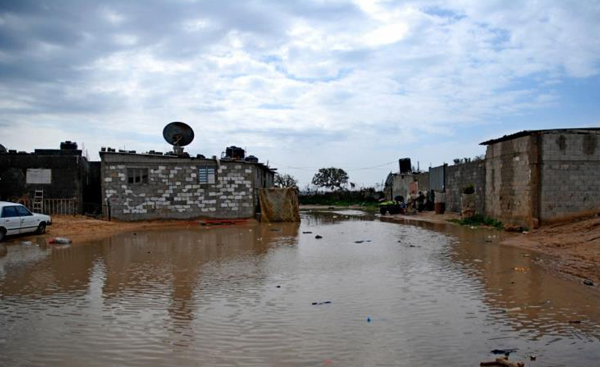 60 per cent of the population has access to running water only every 3-4 days.
Photo: Karl Schembri | Gisha

How do we get the international community to promote and give a platform to Palestinian voices in all fields, political and professional? [Asked by Saeeda on Facebook]

Katleen: It is important for the international community to give a platform to Palestinian voices, as no one lives and feels the situation like they do. Palestinian professionals, advocates, or youths need to be included in discussions at all levels from the most senior political level to local discussions in a small community about how to improve their living conditions. Whenever we receive requests to provide a briefing on the humanitarian situation in Gaza, whether it is a visiting foreign minister or a group of students, our first request always is whether the delegation could make the time to come to Gaza (assuming permits are obtained) and engage in a discussion with the people of Gaza. What these delegations hear is then often used in discussions elsewhere.

More efforts can be made to ensure that people from Gaza, despite the blockade, can participate in discussions about their own future. Even if they cannot be physically present, there are enough ways to establish communication links. During the last war, we paid particular attention to communications with affected communities to hear about their situation and their needs, but also to provide them with life-saving information, for example through radio, TV or SMS. Also now, we continue to do so to better support but also to ensure that their messages reach those who can make decisions. Exchanges at the highest political level and at the personal level can both make a difference and create a better understanding. But most importantly, it will put a human face to the 'issue'.

Is there a possibility for opening Gaza to free-passage and normal human activity? [Asked by Nancy on Facebook]

"Changes in access policy – such as removing restrictions on family visits, student travel, travel for work, exit of goods and entrance of construction materials – could make a substantive difference in the lives of civilians who should not be made to the pay the price for the actions of militants."

Tania: The major impediment to improving the situation in Gaza is lack of political will. Solutions to security challenges can and have been found, when there is political will to do so. While movement restrictions have long been a feature of the occupation, whether in Gaza or the West Bank, a political decision was made to further restrict access in Gaza in June 2007 as a response to Hamas seizing internal control of the territory.

Since then, and despite the fact that Hamas remains in power, some elements of the closure policy have thankfully been reversed, such as the ban on entrance of everyday items like children’s toys and paper. Much more remains to be done and can be done. Changes in access policy – such as removing restrictions on family visits, student travel, travel for work, exit of goods and entrance of construction materials – could make a substantive difference in the lives of civilians who should not be made to the pay the price for the actions of militants. This is especially true when you take into account the fact that over half of Gaza’s population are under the age of 18 – that’s more than 900,000 children!

Our thanks to everyone for sending in questions for this Gaza One Year On Q&A. These questions have produced very interesting answers from two experienced experts working in Israel Palestine to improve the situation there.

Gaza one year on: your questions answered

Wednesday 26 August marks one year since the ceasefire that ended the Gaza war of 2014. However, one year later, little has been done to improve conditions in Gaza. We invited you to ask&nbsp;your questions on the situation in Gaza&nbsp;and passed these,