The Elders warmly welcome the appointment of Lesley-Anne Knight, who will succeed Mabel van Oranje as Chief Executive Officer from January 2013.

Lesley-Anne Knight was previously Secretary General of Caritas Internationalis, a global confederation of 165 Catholic development and humanitarian organisations. In this role she was responsible for strategic planning, policy and advocacy, and the global coordination of the Caritas response to humanitarian emergencies as a result of natural disasters, famine and conflict. She was the first woman to be appointed to the position.

Born and brought up in Zimbabwe, Ms Knight attended university in Cape Town, South Africa, during the apartheid era. This early exposure to enforced racial segregation instilled in her a keen awareness of inequality and injustice, and influenced her decision to pursue a career that would address issues such as poverty, injustice and conflict.

Following further study in France and the UK, she worked in Spain, Guatemala and Mexico before being recruited by Oxfam as a Programme Assistant for Central America.

After eight years in Latin America, Ms Knight moved to London and joined CAFOD (the Catholic Agency for Overseas Development), as Programme Coordinator for Latin America and the Caribbean. She later went on to become the International Director at CAFOD, responsible for a staff of around 200, with 10 regional offices and operations across Africa, Asia and Latin America.

Mabel van Oranje resigns as CEO of The Elders

The Elders have reluctantly accepted the resignation of Mabel van Oranje as Chief Executive Officer of the organisation, with immediate effect. 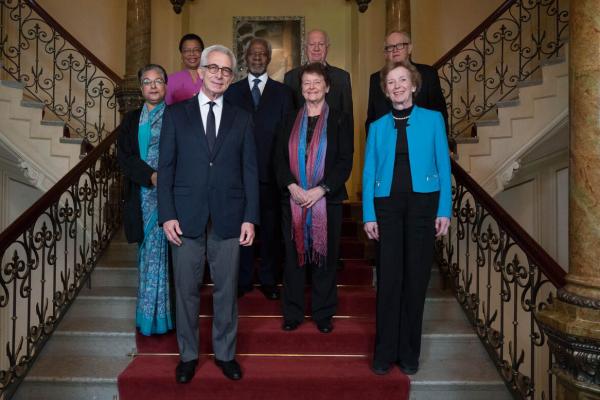 Following The Elders' board meeting, Martti Ahtisaari reflects on the importance of maintaining multilateralism at the heart of international relations in order to overcome today's greatest challenges, particularly climate change.