In November 2010, long-awaited presidential elections in Côte d’Ivoire sparked widespread violence and instability. While Côte d’Ivoire’s Independent Electoral Commission had declared Alassane Ouattara as the winner with 54 per cent of the vote – a result which was later certified by the United Nations Representative in the country – the results were disputed by Côte d’Ivoire’s Constitutional Council, under the influence of the government.

Incumbent president Laurent Gbagbo then refused to step down, triggering fighting between forces loyal to Gbagbo and those under the control of Ouattara, his long-time rival. Attacks were reported against civilians and UN personnel. Over 3,000 people were killed and hundreds of thousands were displaced, internally or to neighbouring countries.

Kofi Annan speaks with a group of the internally displaced persons (IDPs) at a church, Abidjan, May 2011

The fall of the Gbagbo government in April 2011 brought an end to the immediate political crisis at the heart of Côte d’Ivoire’s conflict. The new government, under the leadership of President Alassane Ouattara, has made much progress in rebuilding the country and its economy.

However, reconciliation between former enemies remains incomplete, both at the national and local levels. The Dialogue, Truth and Reconciliation Commission (CDVR) reached the end of its original two-year mandate in September 2013 without achieving all its objectives, posing a significant challenge to the achievement of reconciliation ahead of the national elections scheduled for 2015. Consequently, the CDVR’s mandate was extended by presidential decree for one year.

The Elders support efforts by the Ivorian government and civil society to promote reconciliation and healing in Côte d’Ivoire.

To be successful, The Elders believe that the truth and reconciliation process should be independent, consultative and inclusive. Civil society must take a prominent role in the process. The Elders also believe that reconciliation relies on a fair judicial system and on accountability for all human rights violations committed during the conflict.

In May 2011 Kofi Annan, Desmond Tutu and Mary Robinson travelled to Côte d’Ivoire to encourage reconciliation and healing, following months of post-election violence. The three Elders:

Kofi Annan returned to the country in January 2012, where he noted some improvements in the economic and security situation, but emphasised that reconciliation had to remain a national priority.

Mr Annan then travelled to Côte d’Ivoire as Chair of The Elders in October 2013. During his visit, he met a wide range of interlocutors including President Alassane Ouattara and Guillaume Soro, President of the Assemblée Nationale; members of the government; and several opposition members including Pascal Affi N’Guessan, President of the Front Populaire Ivoirien. He also had meetings with Charles Konan Banny, President of the Commission on Dialogue, Truth and Reconciliation; Aïchatou Mindaoudou, Special Representative of the UN Secretary-General; and business leaders and civil society representatives.

While welcoming promising signs of economic recovery, Kofi Annan urged Ivorians to work together to build an inclusive future and prepare for peaceful elections in 2015.

The Elders continue to monitor closely the political and humanitarian situation in Côte d’Ivoire, support and encourage the reconciliation process, and remain in touch with civil society groups in the country. 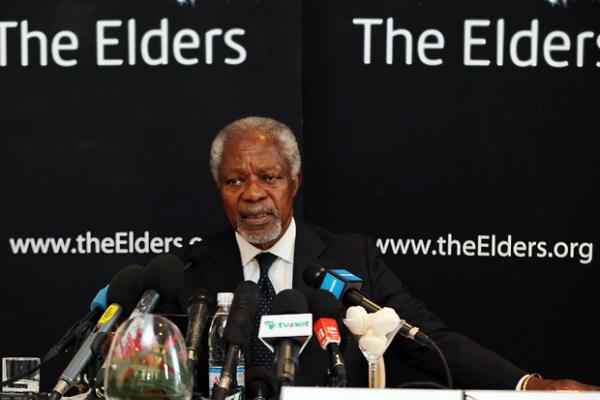