“The 21st century is Africa’s century” From the women peace-builders telling senior African Union officials “enough is enough” to the activists demanding justice for victims of sexual violence: Mary Robinson blogs about the inspiring women she met during her recent visit to Addis Ababa.

New words, and new methods – this idea was brought home to me last month when I travelled to Addis Ababa, Ethiopia, to meet with several groups of remarkable women leaders. They strive to build peace in Sudan and South Sudan; to bring justice to victims of sexual violence in conflict zones; to mentor the next generation of African leaders.

We share a desire to approach problems in new and different ways, recognising that women continue to be sidelined.

In Sudan and South Sudan, women want to be at the negotiating table

I met with a distinguished Coalition of Women Leaders convened by the Institute for Inclusive Security, an NGO which supports women’s contribution to peace building.

It was an impressive group from both countries, including state ministers, diplomats, legislators, leading civil society activists, Christians and Muslims – all women – who find it extremely difficult to travel to each other’s countries. Promisingly, the two countries signed Cooperation Agreements in September 2012, but implementation has stalled on a number of fronts and violence continues. Within that context, the group agreed that full participation of women in the peace and implementation processes was lacking – and badly needed.

Women and children are disproportionately affected by the unresolved issues affecting the two countries. Border demarcation and nationality issues have separated families. The ongoing conflict and humanitarian crisis in South Kordofan and Blue Nile states, in Sudan, has affected nearly one million people, and women and girls represent a majority of those who must flee.

These women were more than ready to tell their leaders, and the men who dominate the official negotiations, that enough is enough.

And they did. We had a very frank and open discussion with senior African Union (AU) officials, including Ambassador Ramtane Lamamra, AU Peace and Security Commissioner, as well as Abdul Mohammed, Chief of Staff to the AU High-Level Implementation Panel (AUHIP), which oversees the peace process.

One essential idea that we raised was the creation of a ‘consultative taskforce’ of women leaders to participate in the peace and implementation processes.

The women then managed to secure a meeting with Thabo Mbeki himself, the Chair of the AUHIP, along with his fellow Panel members, former Presidents Abubakar and Buyoya of Nigeria and Burundi respectively – quite a feat during the week of the African Union Summit.

The women presented their recommendations, including the creation of the taskforce, which President Mbeki agreed was an excellent idea that needed to be taken forward. Women are too often the victims of atrocious sexual violence in conflict zones. This was a focus of another meeting I attended in Addis, where one such victim said: “they have taken my life without killing me.” Until she has recourse to justice, she added, she felt she could not take back her life.

The biannual meeting of the Gender is My Agenda Campaign (GIMAC) addressed the issue of sexual violence in depth (along with other issues including education, agriculture, conflict resolution) to develop new ways in which women can help stop the violence.

We were inspired to hear from Zainab Bangura, the Sierra Leonean politician and social activist who was recently appointed Special Representative of the United Nations Secretary-General on Sexual Violence in Conflict.

She called for ending the impunity for perpetrators of sexual violence and bringing them to justice. She added that the problem compels national responses: governments must recognise the extent of rape and sexual violence taking place within their borders and the real effect it has on their populations. To do so, they must empower police forces and bolster their justice systems.

During GIMAC, I also had the pleasure of reconnecting with my old friend Nyaradzayi Gumbonzvanda, Secretary General of the World Young Women’s Christian Association (YWCA), who introduced me to over 40 young, inspiring African YWCA members.

Their energy and drive was felt in all of the discussions. They were especially looking forward to their meeting with Nkosazana Dlamini-Zuma, the recently-elected and first female Chair of the African Union Commission.

The chance to meet such role models – and see them in action – is essential when you consider that they are so scarce: only seven countries in Africa have over 30 per cent female representation in their parliaments, for example.

As a woman barrister in the 1970s, when most of my colleagues were men; as the first woman to have been elected President in my country, I know that gender barriers can be overcome. But I also know how much harder it can be for a woman in these positions. These opportunities for support and exchange are vital.

One feeling that was shared widely, however, is that Africa is changing for the better: while women bear the brunt of conflicts in Sudan, South Sudan, the DRC, Mali, among other conflicts, women are achieving higher levels of education and economic empowerment than ever before. More women are also coming into positions of leadership.

Someone in Addis said to me that the 21st century is Africa’s century: as we see more women lead their communities, and their countries, we hope to see fewer conflicts, more peace, and less poverty.

My fellow Elders and I certainly believe there is a link between the two.

I left Addis Ababa energised, convinced that I had met some of the women who would lead this change throughout the continent.

And as we left Mrs Dlamina-Zuma’s office, she told the YWCA women: “If you dream it, it will happen.”

Mary Robinson has been in Addis Ababa for the binannual meeting of the Gender is My Agenda Campaign, to meet Sudanese and South Sudanese women leaders, and stress the importance of involving women in the peace process between the two nations. 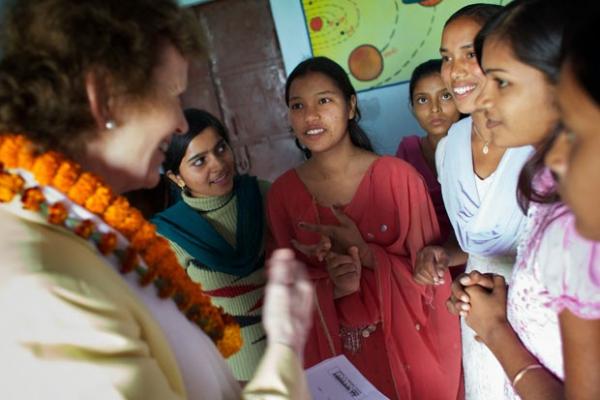 Equality for girls and women has been a core focus of The Elders’ work ever since the organisation was founded. To mark International Women’s Day 2012, we revisit some of their work with women in Sudan, the Middle East, Cyprus, Côte d’Ivoire and No

Summary report – October 2012
With ongoing conflicts in Blue Nile and South Kordofan and worsening relations between Sudan and South Sudan, The Elders made a series of visits in 2012 to both nations, to highlight the growing humanitarian crisis and enc