Home

Who we are

The Elders

Mary Robinson

Chair of The Elders 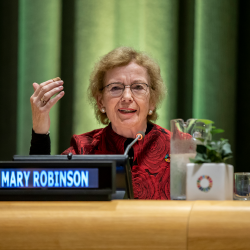 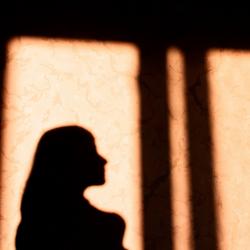 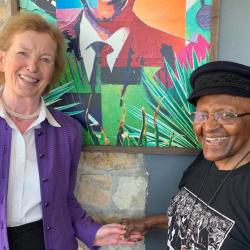 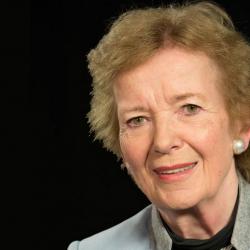 When Nelson Mandela brought us together as Elders, he did so in the belief that together we are stronger, that change happens when people collectively take action to make our world a better place.

"I was elected by the women of Ireland, who instead of rocking the cradle, rocked the system."

“Human rights are inscribed in the hearts of people; they were there long before lawmakers drafted their first proclamation.”

Chancellor of the University of Dublin

UN Special Envoy for the Great Lakes Region of Africa

Appointed Chair of The Elders


Part of the wisdom of the Elders is to remind the world that we actually have universal values that are accepted by every government in the world and yet they are not being implemented.

Mary Robinson is a founding member of The Elders and was appointed Chair in November 2018 following the death of Kofi Annan. She makes it a priority to bring the concerns of ordinary people to the international stage and is a globally recognised voice on climate change and the intersectionality of the climate emergency: from intergenerational injustice to gender inequality and biodiversity loss.

As a member of The Elders, Mary Robinson has addressed the UN Security Council and other agencies on multiple occasions. She has met with world leaders to promote global peace and ethical leadership, including Pope Francis in the Vatican, President Emmanuel Macron in Paris and President Xi Jinping in Beijing to discuss multilateralism, climate change, nuclear non-proliferation and human rights.

Mary Robinson has also been part of several delegations to the Middle East with the Elders to encourage peace efforts and support Israelis and Palestinians working for peaceful coexistence; and visited the Korean Peninsula to try to help ease tensions between North and South Korea and learn more about North Korea’s chronic food crisis.

Mary Robinson was elected Irish President in 1990 and served for seven years as a principled and transformative leader who continued to fight for equality and women’s rights throughout her time in office. A firm believer in dialogue and reconciliation, she broke taboos by being the first Irish head of state to make official visits to Britain, as well as regularly visiting Northern Ireland.

As UN High Commissioner for Human Rights (1997-2002), Mary Robinson integrated human rights into the United Nations system and became renowned as an outspoken voice dedicated to investigating and exposing human rights abuses across the world.

She founded Realizing Rights: The Ethical Globalization Initiative, which aimed to put human rights standards at the heart of global governance and to ensure that the needs of the poorest and most vulnerable are addressed on the global stage. For this, she was awarded the Presidential Medal of Freedom by President Barack Obama in 2009.

As an academic, legislator and barrister, Mary Robinson has always sought to use law as an instrument for social change, arguing landmark cases before the European Court of Human Rights as well as in the Irish courts and the European Court in Luxembourg. A committed European, she also served on expert European Community and Irish parliamentary committees. In 1988 Mary Robinson and her husband Nick Robinson founded the Irish Centre for European Law at Trinity College, University of Dublin. Ten years later she was elected Chancellor of the University.

Mary Robinson co-founded the Council of Women World Leaders in 1996, a network that mobilises women leaders at the highest levels to promote democracy and gender equality. She is a member and former president of the Club of Madrid, a group of global leaders working on governance and conflict issues. She is also:

A tireless champion of women’s equality, she travelled to Ethiopia in June 2011 with her fellow Elders to convene an international meeting of experts and activists working to end child marriage, which was followed by a visit to India in February 2012 to support youth activists tackling early marriage in their communities. She travelled again to Ethiopia, Sudan and South Sudan in 2013 to meet with women leaders and encourage their participation in the peace process. She also visited the Democratic Republic of Congo in 2013, as the UN Special Envoy for the Great Lakes region, to promote women’s rights and where she met with women survivors of sexual abuse.

Between 2013 and 2016, Mary Robinson served as the UN Secretary General’s Special Envoy in three roles; first for the Great Lakes region of Africa, then on Climate Change and most recently as Special Envoy on El Niño and Climate along with Macharia Kamau of Kenya, to focus the world’s attention to meet the urgent challenges posed by extreme weather events on the poorest and most vulnerable communities. She continued in this post until the end of December 2015 which saw the successful conclusion of the COP21 Climate Summit and the historic Paris Agreement on Climate Change.

Mary Robinson is a strong advocate for climate justice and intergenerational dialogue. She led the Mary Robinson Foundation – Climate Justice between 2010-2019, a centre for education and advocacy on sustainable and people-centred development in the world’s poorest communities. After successfully achieving its strategic objectives, the Foundation came to a planned close in April 2019.

Since 2016, in partnership with One Young World, the Mary Robinson Climate Justice Award has been awarded to young leaders working on impactful climate justice initiatives.