“The people of the world want to see an end to the threat from climate change” Returning from New York, Elders CEO Lesley-Anne Knight reflects on the results of last week’s Climate Summit, which follows the largest-ever march on climate change, and calls for continued pressure on leaders to act decisively.

On the Sunday before the UN Climate Summit, we witnessed the biggest demonstration on climate change the world has ever seen.

Across the globe, nearly 700,000 people came out on to the streets to demand action from their governments. At the main event in New York City, the march spanned 80 blocks, bringing together young people, veteran activists, politicians, scientists, religious leaders, small island representatives and countless others to deliver a clear and powerful message: the people of the world want to see an end to the threat from climate change – now, not tomorrow.

The Elders attended the summit itself, spoke at side events and did whatever they could to add further momentum to the movement out in the streets. Graça Machel spoke at the closing ceremony, delivering a robust review of the day’s events and challenging world leaders to do more.

Online, millions followed proceedings through a host of hashtags, including #Climate2014, #PeoplesClimate, #WalkTheWalk, #TimeForAction – and of course our own: #NowNotTomorrow. The Elders' hashtag was featured in a full-page ad in the New York Times and the ‘Now. Not Tomorrow’ slogan was taken up by demonstrators in London and New York. 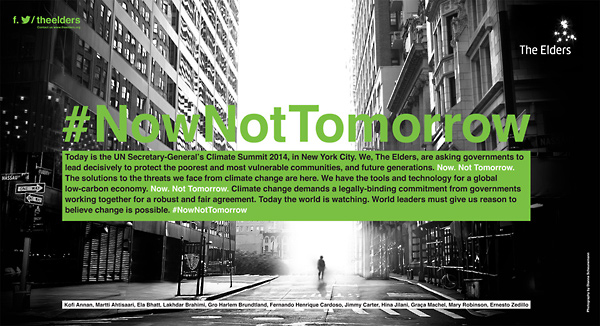 The message from The Elders was simple: the solutions to the threat we face from climate change are here. We have the tools and the technology. What we need is leadership to cement a global agreement and to apply it everywhere. The time to lead is now, not tomorrow.

This is an important message because the Summit was just the start of what promises to be a long and fraught process of multilateral negotiations that could dampen any sense of urgency.

The #NowNotTomorrow message will continue until the talks culminate, hopefully successfully, in Paris in December 2015.

The week of the UN General Assembly demonstrates how hard it can be to focus the world on any given crisis. Once the Climate Summit ended, proceedings moved promptly on to the next points on the global agenda.

But those outside the United Nations will no longer let delegates forget this particular issue. As President Obama said in his powerful speech: “Our citizens keep marching. We cannot pretend we do not hear them.” 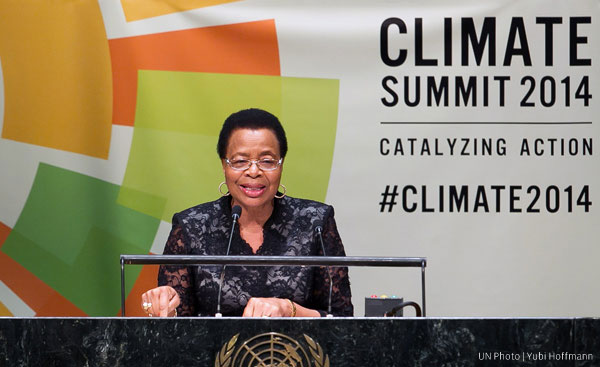 Graça Machel reinforced that point in her bold speech at the close of the Summit.

“I won't be speaking to you today about facts and statistics,” she said.

“We have heard them all before. Scientists have provided all the information. They have provided evidence. So what I want to talk about today is courage, leadership and obligation.”

During the day, we had seen world leaders take turns at the podium to make their climate pledges. But, after congratulating the UN Secretary-General for his leadership in convening the meeting, Mrs Machel declared: “I have the impression that there is a huge mismatch between the magnitude of the challenge and the response which we heard here today.”

As she continued, people outside the UN building and around the world were celebrating the moment as a burst of fresh air.

Graça Machel did what The Elders do best: she spoke truth to power.

Echoing the frustrations of millions, she said of the day’s pledges: “Maybe we should go back to the drawing board and ask some hard questions.”

But there was some cause for cautious optimism: speeches by President Obama and Chinese Vice-Premier Zhang Gaoli made clear that their governments will take the process seriously. President Obama pledged specific targets “by early next year.” And it was encouraging to hear China declare that its emissions would soon be reaching their peak.

France will be integral to the process between now and next year’s meeting in Paris, so we were also heartened by President Hollande’s pledge of $1 billion dollars for the UN’s Green Climate Fund. But as Graça Machel said, the world needs much more if we are to stop a rise of global temperatures above 2 degrees celsius. And if we fail, we will reap catastrophic results. So now – not tomorrow – is the time for The Elders to keep up the pressure. And we will.