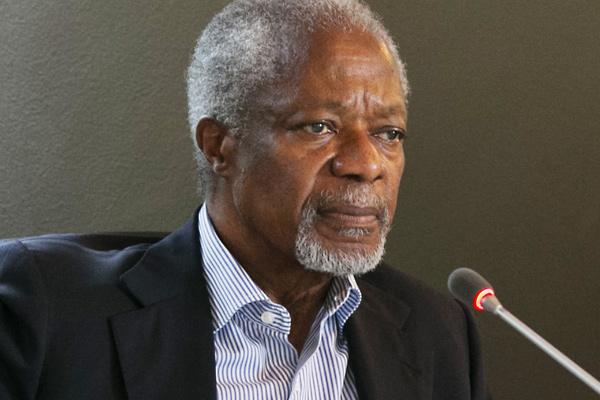 “We have a duty to be exceptionally ambitious... If leaders are unwilling to lead when leadership is required, people must.” As preparations begin for the UN Climate Summit, Kofi Annan urges us all to take personal responsibility to ensure ambitious action on climate change.

If ever there were a cause which should unite us all, old or young, rich or poor, climate change must be it.

On Sunday 21 September, the world witnessed the largest ever demonstration on climate change in history. Several members of the Elders stood in solidarity with demonstrators at a major march in New York City. Wherever you are, I hope you are making your voice heard.

The science is clear and tells us that human actions are the dominant cause of climate change in the modern era. However, human action can also reverse this trend. This is within our reach, but only if political and businesses leaders set aside their own narrow interests and show leadership that extends beyond the next electoral cycle or the next shareholder meeting.

Tomorrow, 23 September, UN Secretary-General Ban Ki-Moon hosts 120 world leaders in New York to prepare a global response to the worsening climate crisis. This summit is yet another milestone of a process that will last months, culminating in the landmark 2015 Climate Change Conference in Paris.

We have a duty to be exceptionally ambitious. As Elders, we have been in politics for some time. We know the importance of bold and visionary words from world leaders. The higher they set their sights, the better the agreement in 2015.

From Manhattan to the Maldives, no one escapes the impacts of climate change. After all, its consequences are felt across all societies as the European flood victims, the Philippine typhoon victims or those who bore the brunt of wildfires from California to Australia can attest to. Climate change, as I write this, is causing displacement, fuelling conflict and jeopardizes development across the world.

You could say that either these delegates in New York succeed, or we all fail. But that would be absolving the rest of us from our responsibilities. Let us send a clear and unequivocal signal that failure to act will have consequences at the ballot box for politicians and for the bottom line of businesses. If leaders are unwilling to lead when leadership is required, people must.

How can we urge our leaders to act on climate change?Ahead of next week’s Climate Summit, we are joining people worldwide in calling for immediate action to protect our planet.

"Governments have no excuse not to act on climate."Our CEO Lesley-Anne Knight explains why The Elders have written to all heads of state calling for bold, concerted action ahead of a major climate summit in December 2015.