Home

Who we are

The Elders

Kofi Annan 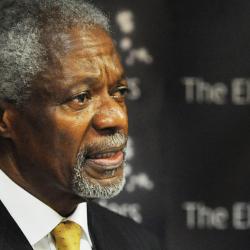 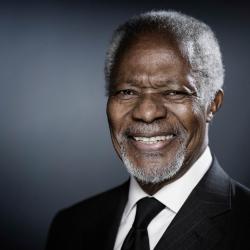 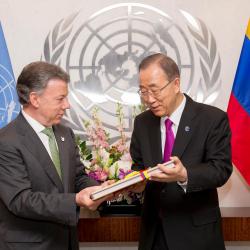 You are never too young to lead, and never too old to learn.

"I remain convinced that the United Nations belongs not only to the governments of its Member States but above all to their peoples, in whose name it was founded. That means that it must become more democratic by ensuring that all the world's peoples, and not only the richest and the most powerful, have a voice and also that those who make the decisions genuinely represent their peoples and are accountable to them."

"Today's real borders are not between nations, but between powerful and powerless, free and fettered, privileged and humiliated. Today, no walls can separate humanitarian or human rights crises in one part of the world from national crises in another."

"There is lots of goodness in the world. Do not go through life focusing on the negative, be open and embrace the goodness."

Former UN Secretary-General, Nobel Peace Laureate and Chair of The Elders; put development, human rights, the rule of law, good governance and peace at the top of the United Nations agenda.


Chair of The Elders


People want responsible leadership. On big issues, they are not going to sit in their homes. They will act and press for action.

Kofi Annan was a founding member of The Elders and in 2013, he succeeded Desmond Tutu as Chair – a position he held until his death in 2018.

Following The Elders’ first engagement as a group in 2008, where he together with fellow Elders Jimmy Carter and Graça Machel drew the world’s attention to the humanitarian crisis affecting Zimbabwe, Kofi Annan was heavily involved in all aspects of The Elders’ work over the next eleven years.

During this time, he travelled around the world to encourage reconciliation and dialogue in war-torn countries and regions, worked to promote fair elections and democratic integrity, human rights and security, and championed youth engagement in tackling global threats including climate change, extremism and inequality.

In his Elders’ role, Kofi Annan met with numerous world leaders including President Ouattara of Côte d'Ivoire in 2011; senior leaders of Iran in 2014; President Vladimir Putin in 2015; Pope Francis in 2017; President Macron in 2017; HRH King Salman of Saudi Arabia in 2018; and made several trips to New York to meet with the UN Secretary-General and the UN Security Council.

Between February and August 2012 Kofi Annan temporarily recused himself as a member of The Elders during his UN and Arab League assignment as Joint Special Envoy on the Syrian crisis.

Following his sudden death in July 2018, leaders from across the world paid tribute to Kofi Annan and his legacy. His successor and fellow Elder Ban Ki-moon said: “Kofi Annan was a committed humanitarian and monumental leader who leaves behind him a remarkable and enduring legacy,” and UN Secretary-General António Guterres emphasised how Mr Annan was a guiding force for good: “In these turbulent and trying times, his legacy as a global champion for peace will remain a true inspiration for us all.”

7th Secretary-General of the United Nations

Kofi Annan was the 7th Secretary-General of the United Nations and the first to emerge from the ranks of UN staff. A strong advocate for human rights, development and the rule of law, he revitalised the UN, bringing it closer to the public by forging ties with civil society and the private sector.

Under Kofi Annan’s leadership, UN member states agreed on the Millennium Development Goals in 2000 – the first global blueprint to end poverty – and adopted the Responsibility to Protect doctrine (R2P) in 2005. Kofi Annan also oversaw the strengthening of UN peacekeeping to cope with a rapid rise in the number of operations and personnel, and the establishment of two new intergovernmental bodies: the Peacebuilding Commission and the Human Rights Council.

He played a central role in the creation of the Global Fund to fight AIDS, Tuberculosis and Malaria; the adoption of the UN’s first counter-terrorism strategy; and the acceptance by Member States of the ‘responsibility to protect’ people from genocide, war crimes, ethnic cleansing and crimes against humanity when their own states fail to do so. His Global Compact initiative was launched in 1999 and has become the world’s most influential effort to promote corporate social responsibility.

In 2001, Kofi Annan was awarded the Nobel Peace Prize jointly with the United Nations "for their work for a better organised and more peaceful world."

As UN Secretary-General, Kofi Annan undertook wide-ranging diplomatic initiatives. In 1998, he helped ease the transition to civilian rule in Nigeria. That same year, his efforts helped avoid an outbreak of hostilities in Iraq following an impasse between the country and the UN Security Council over compliance with resolutions on weapons inspections and other matters.

In 1999, he was deeply involved in the process by which Timor-Leste gained independence from Indonesia. He was responsible for certifying Israel’s withdrawal from Lebanon in 2000, and in 2006 his efforts contributed to securing a cessation of hostilities between Israel and Hizbollah.

Kofi Annan continued to use his experience to mediate and resolve conflict after stepping down as UN Secretary-General. In Kenya, in early 2008, he led the African Union’s Panel of Eminent African Personalities to mediate a peaceful resolution to the post-election violence. Between February and August 2012, he served as the UN/Arab League Joint Special Envoy on the Syrian crisis.

In September 2016, Mr Annan was appointed Chair of the Advisory Commission on Rakhine State in Myanmar, tasked with supporting and advising the Government of Myanmar in resolving the conflict in Rakhine State and improving the welfare of all people living there.

Since leaving the United Nations, Kofi Annan continued to advocate for better policies to meet the needs of the poorest and most vulnerable, particularly in Africa.

In 2007 he established the Kofi Annan Foundation, which works to promote better global governance and strengthen the capacities of people and countries to achieve a fairer, more secure world. Through the Kofi Annan Foundation, he launched the West Africa Commission on Drugs in January 2013 with the aim to raise the issue on the political agenda and create more effective policy responses.

He also chaired the Africa Progress Panel and the Alliance for a Green Revolution in Africa, and was a Board Member, Patron or Honorary Member of a number of other organisations.

You have to be open as a leader, willing to listen. A leader need not always be right; a good leader is also a good follower.