The Elders mourn the loss of Shimon Peres 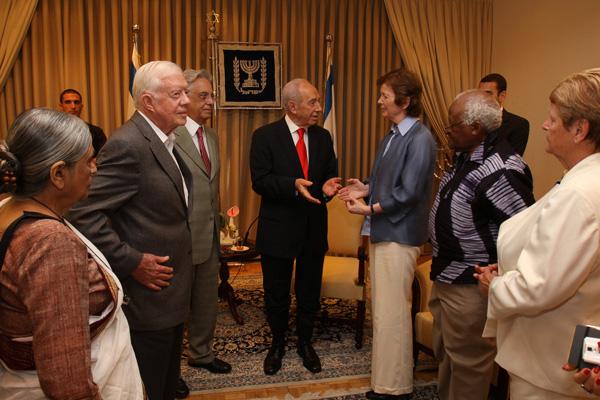 The Elders' statement on the passing of Shimon Peres, former President of Israel and Nobel Peace laureate.

The Elders today expressed their condolences at the passing of Shimon Peres, former President of Israel and Nobel Peace laureate, who has died at the age of 93. Together with the late Yitzhak Rabin and Yasser Arafat, Shimon Peres won the Nobel Prize in 1994 for his role in securing the Oslo Accords with the Palestine Liberation Organisation.

The Elders hailed his long life in the service of his country and in the quest for peace with the Arab world. He combined steadfast patriotism with a long-lasting belief in a two-state solution as the only way of bringing peace, justice and security to Israelis and Palestinians alike.

The Elders recall their meetings with Shimon Peres during trips to Israel in 2009 and 2012 as examples of open and frank dialogue. As President and subsequently, through his work at the Peres Peace Centre, he continued to speak out about the need for an end to Israeli occupation of the West Bank and Gaza Strip, and the creation of a viable Palestinian state.

Following the announcement of his death, many Elders recalled their meetings with the late Israeli leader with affection. Among the personal tributes made were the following:

Kofi Annan, Chair of The Elders and former UN Secretary-General:

“Shimon Peres was a truly remarkable man who was known not just for his sharp intellect and visionary politics but also for his warmth and sense of humour. His story is inseparable from the history of the state of Israel itself. Never afraid to stand up for his ideals, he laboured tirelessly for peace over violence and dialogue over confrontation. Israel has lost a founding father, the world a great statesman and I have lost a friend.”

Gro Harlem Brundtland, Deputy Chair, who was Prime Minister of Norway at the time of the Oslo Accords:

“Shimon Peres showed his commitment to peace and always remained a vocal advocate of the two-state solution even as the political and security situation deteriorated after the signing of the Oslo Accords in 1993. I hope current and future leaders of Israel recall his warnings about the futility of continued occupation of Palestinian lands.”

Jimmy Carter, Honorary Elder and former President of the United States who led several Elders’ delegations to Israel and Palestine:

“Shimon Peres worked for many years to bring peace to Israel and Palestine, and he showed great courage in his work on the Oslo Accords, which had the potential to transform the region. He was a gracious host during my visits to Israel while he was in office.”

“One of the remarkable founding fathers of modern Israel, Shimon Peres will be missed immensely – for his wisdom, serenity and unwavering dedication to the peace and prosperity of his beloved nation.”

Ela Bhatt, Elder, founder of the Self Employed Womens Association (SEWA), and a disciple of Mahatma Gandhi:

“I remember meeting him for the first time at the Histadrut trades union federation headquarters in Tel Aviv. Later, when I met him again, together with the Elders, in 2009, I was impressed to learn that he was familiar with the thinking of the Mahatma about labour relations, especially his principle of trusteeship to ensure good cooperation between workers and managers.”