The Elders have urged Bulgaria to use its tenure to push for greater action and ambition on refugee resettlement through developing a strong Union Resettlement Framework.

“A strong Framework developed under your leadership would send a signal to the rest of the world that Europe is leading in tackling this global challenge and does not stand idly by while people fleeing war and persecution suffer.” - Kofi Annan

The Elders have urged Bulgaria to use its tenure as holder of the European Union Presidency to push for greater action and ambition across the 28-nation bloc to resettle the world’s most vulnerable refugees.

In a letter to Bulgarian Prime Minister Boyko Borissov, The Elders noted that the UN has identified 1.2 million refugees worldwide as being most in need of resettlement, including unaccompanied children, vulnerable women and people with complex medical needs.

They said that the Union Resettlement Framework currently being negotiated by the EU Parliament and Council presents an historic opportunity to address this critical issue.

Bulgaria’s Presidency should step up and show leadership by increasing the number of resettlement places across the EU from the 14,000 offered in 2016, especially in light of President Trump’s decision to significantly cut the US resettlement programme.

“Our collective experience tells us that a strategy to reduce the chaos that Europe has experienced in recent years – and to address member states’ entirely legitimate security and sovereignty concerns – must include increasing legal pathways to safety for the most vulnerable people on the move.

As current holder of the European Union Presidency, the Republic of Bulgaria has an opportunity to steer through an historic piece of legislation, the Union Resettlement Framework, to address this critical issue.”

The Elders encouraged Bulgaria to use its Presidency to seek ambitious outcomes on two key points of the Framework negotiations: it should include a strong target for EU member states to increase the number of resettlement places offered; and, those places must be offered solely on the basis of humanitarian needs.

“A strong Framework developed under your leadership would send a signal to the rest of the world that Europe is leading in tackling this global challenge and does not stand idly by while people fleeing war and persecution suffer,” Kofi Annan said. 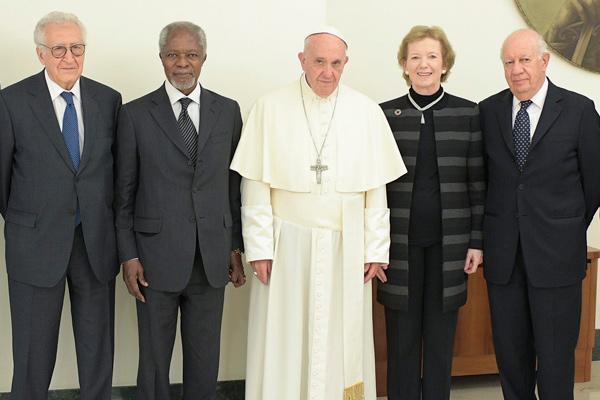 The Elders stand in solidarity with Pope Francis on peace, refugees, climate

The Elders met His Holiness Pope Francis at the Vatican on Monday 6 November to express their appreciation and support for his work on global peace, refugees and migration, and climate change.