The Elders call for swift implementation of the deal reached on Iran's nuclear programme and praise the opportunity to stabilise the region. 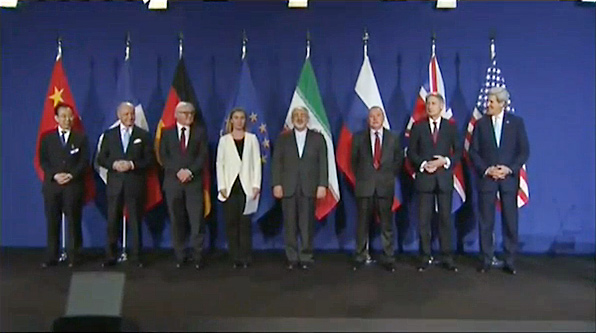 Leaders of the Iran nuclear talks at the press conference announcing the deal, April 2015

The Elders congratulate the leaders of Iran and the “P5+1” powers on their achievement of an agreement on the future of Iran’s nuclear programme after lengthy negotiations in Switzerland.

They urge all parties to now move ahead as swiftly as possible to fully implement the joint comprehensive plan of action, and build on this achievement to further the cause of peace across the Middle East.

Kofi Annan, Chair of The Elders, said he hoped the agreement “will mark the beginning of a much improved relationship between Iran and the international community and an opportunity to strengthen regional security cooperation among Middle East states.”

The Elders hope the deal will help stabilise the region and usher in an era of security cooperation that transcends national rivalries and sectarian divisions.

The agreement should also serve as a timely encouragement to the 2015 Review Conference of the Parties to the Nuclear Non-Proliferation Treaty (NPT), which will take place in April and May.

The Elders encourage all parties to that Conference to harness the momentum engendered by the Iran agreement to strengthen the NPT and further minimise the risks of nuclear proliferation across the world.

As leaders meet to broker a deal on Iran's nuclear programme, The Elders call on all political actors to give the negotiators the time and space to come to an agreement.

Kofi Annan offers his opinion on the US-led Iran nuclear deal in the wake of Israeli Prime Minister Netanyahu's speech to US Congress on 4 March, in an interview with CNN's Christiane Amanpour.