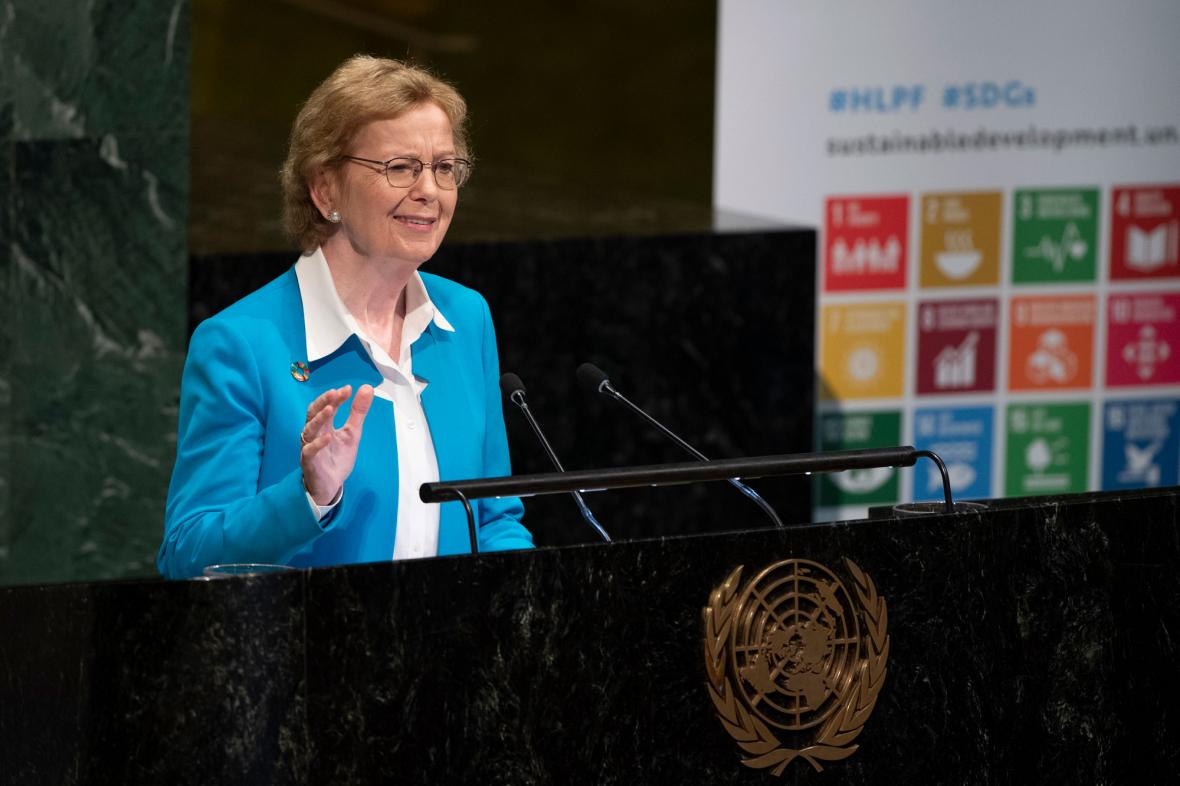 Mary Robinson delivered the following keynote speech at the Opening of the Economic and Social Council High Level Segment and 2019 High-level Political Ministerial Segment at the UN in New York on 16 July 2019.

It is a great privilege to speak to you today at this important meeting to mark the critical work being undertaken to review progress made by member states of the United Nations to implement the Sustainable Development Goals.

I regard the 2030 Agenda as one of the most important diplomatic achievements of this century. Together with the Paris Agreement on climate change, concluded in the same year of 2015, they are tangible proof of the benefits of multilateralism and a rebuke to the narrow agendas of nationalism, isolationism and self-interest.

If implemented in full, they are a pathway to a world where poverty, inequality and conflict will not blight the life chances for millions of people currently denied the opportunity to enjoy their fundamental rights and freedoms.

However, the report of the IPCC last October on global warming at 1.5°C has altered our understanding of the situation we are in. The report made it clear that staying at or below 1.5°C warming above pre-industrial standards was the only safe level for the whole world, and that further warming up to 2°C would cause considerable risk to the planet.

This was followed by the UN report in May 2019 on the loss of biodiversity and potential extinction of 1 million species.

As a consequence, we can no longer afford to regard the 2030 Agenda and the Paris Climate Agreement as voluntary, and a matter for each member state to decide on its own. Instead, the full implementation of both has become imperative because of these reports in order to secure a liveable world for our children and grandchildren. This requires a change of mind-set at the global political level. The IPCC has called for a 45% reduction in carbon emissions by 2030, and said that this is doable if there is the political will. In 2018 carbon emissions increased globally, and they are on course to increase further in 2019. So we have a global crisis and we must treat it as such.

This HLPF provides an opportunity to take an honest look at what all states have achieved and what more we need to do on the SDGs, so that when world leaders convene in New York in September for the SDG Summit, they can come with more than just words.

The President of the General Assembly has urged countries to announce Acceleration Actions at that Summit in September. In her words: “specific, targeted next steps that respond to the urgency of the challenges we face.”

The goals under review at this Forum are focused on education, economic growth, inequality, climate change and peaceful, just and inclusive societies. All these are equally important, but in my remarks today I would like to focus on two goals that are particularly close to my heart: SDG 13 on climate change, and SDG 16 on justice for all.

Peace, justice and inclusion have been fundamental to my career in public life, from national politics in Ireland to the UN stage including as High Commissioner of Human Rights.

Today I have the honour of addressing you as Chair of The Elders, the group of independent global leaders founded by Nelson Mandela a dozen years ago, who work for human rights and a sustainable future for all.

When Madiba first brought us together as Elders, he explained how our work should be governed by the African principle of “Ubuntu” - the sense that we are human only through the humanity of our fellow beings.

We will not overcome the key existential challenges facing our world today, from nuclear weapons to climate change, if we spurn cooperation. Nor when we assert that one particular nation is greater than another and should not be constrained beyond its self-interest.

What sort of world do we want to leave to our children and grandchildren? Is it one of walls and barbed-wire fences, where a privileged few live in comfort whilst the poor and marginalised face climate chaos, discrimination, persecution and violence?

Or is it one where the voices and talents of all members of society are heard and valued, where human rights are cherished and championed, and where decisions are made in the interest of the next hundred years and not the next news headline?

In fact, world leaders already answered this question when they signed up to the SDGs in 2015. This Forum is a crucial opportunity to strengthen this commitment, to mobilise further actions to accelerate implementation, and to insist that strategies to achieve the SDGs respect human rights and leave no-one behind.

Justice is the thread that runs through the each of the 17 SDGs. Without equal access to justice for all, at every level in society, we stand little chance of achieving the wider goals.

It is grotesquely unfair that the poorest and most vulnerable people on the planet, who have contributed the least to carbon emissions and other forms of environmental pollution, are paying the highest price as temperatures and sea waters rise.

Some small-island states in the Pacific will literally disappear unless the richer industrialised countries take much more radical and urgent action to keep temperature rises to 1.5 degrees, including a definitive and wholesale move away from fossil fuel use and extraction.

Failure to act will be a terrible stain on the world’s conscience, and will mean any future references to justice or common endeavour ring hollow for the millions impoverished and displaced by the climate catastrophe.

Injustice of course takes many forms, ranging from this global level to the everyday life of women and men and their interactions with each other and public and private institutions.

Too often, the justice systems that are supposed to prevent and resolve these problems cater for the few rather than the many.

This year, the Task Force on Justice, which is co-chaired by my fellow Elder, Pakistani Supreme Court Advocate Hina Jilani, together with the governments of the Netherlands, Sierra Leone and Argentina -- launched a report which estimates that 5.1 billion people lack meaningful access to justice.

This chasm between the haves and have-nots should shame us all.

And injustice carries a heavy price tag. A failure to deliver justice affects physical and mental health, the environment and the economy.

The Task Force estimates that in low-income countries, everyday justice problems cost more than 2% of GDP. On a global scale, violence against women is estimated to cost between 1 and 4 percent of GDP.

Ministers should be reminded of these sobering figures. But they should also be told that for a fraction of these costs, change is possible.

Preliminary calculations by the Task Force suggest that in low-income countries it would cost as little as $20 to provide each person with access to basic justice services. And when governments work with communities and civil society groups who really know the realities of injustice that people face, and co-operate to deliver access to justice, the impact of this investment is so much greater.

Money alone will not solve the problem, however. Access to justice will only be achieved through a people-centred approach.

This week, as countries present their voluntary national reviews on progress towards the Goals, we will hear some inspiring accounts of how some governments are responding to this challenge

By instituting low-cost interventions, enacting legislation, working with civil society to help people access justice, and gathering new data about people’s real justice needs, these governments are seeing how strengthening access to justice is helping to achieve other SDGs, from economic growth to gender equality and access to health and education.

At the same time as working to resolve justice problems, we should devote more attention and resources to preventing problems from arising in the first place and addressing the root causes of conflict and injustice.

Last month I had the honour of addressing the UN Security Council alongside Ban Ki-moon, now the Deputy Chair of The Elders. Our remarks focused on conflict prevention and the urgent need for the Council to act collectively in the interests of all of the United Nations.

In his remarks, Ban Ki-moon quoted one of his illustrious predecessors as Secretary-General, Dag Hammarskjöld. His words from over half a century ago apply vividly to our deliberations today:

This High-Level Political Forum is a moment to be bold and to demand real ambition from leaders.

“Playing safe” or doing “business as usual” will not deliver the results the world needs.

We need to see much greater investment in justice, both as a preventer of conflict and a promotor of economic growth.

We need to recognise and protect those who are working to deliver justice on behalf of others – judges, lawyers and prosecutors but also paralegals, advisors, community leaders and civil society groups – so that they can be essential partners in this fight.

Here, today, we need to use the HLPF as a springboard for action to deliver the promise of the SDGs and build a world that Nelson Mandela and other justice champions would recognise as fair, open and free. 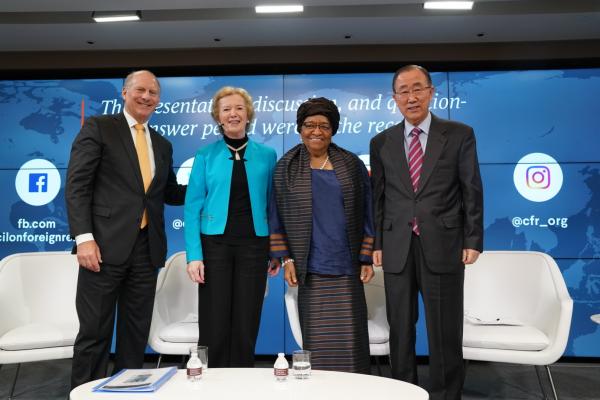 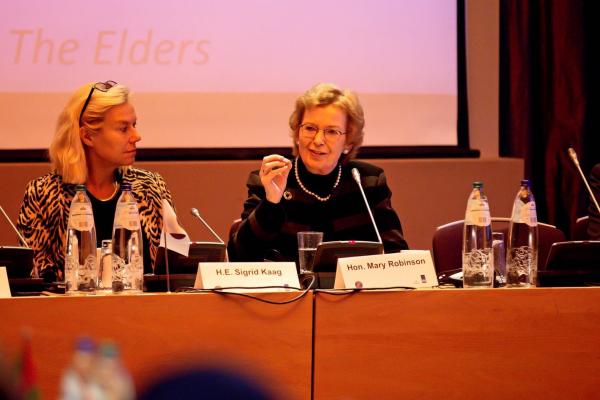 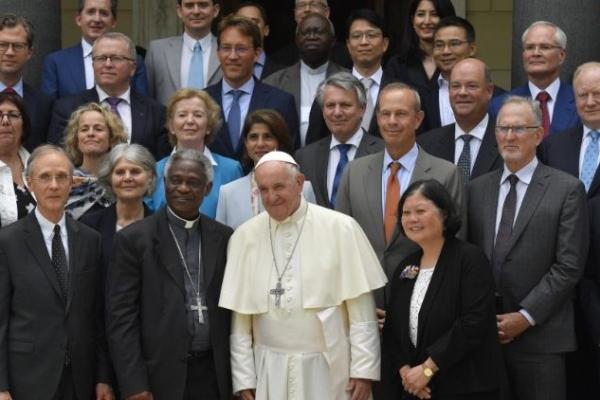