“We heard concerns that citizens’ perspectives are not being taken into account.” Gro Harlem Brundtland After meeting with Myanmar government officials and civil society groups, The Elders call for greater inclusiveness and trust-building in Myanmar.

CHIANG MAI (Thailand) – The Elders encourage the government of Myanmar to strive for greater inclusiveness, to overcome decades of mistrust within society and reflect the full diversity and talents of Myanmar’s population.

They note that upcoming political milestones – the nationwide census, debates over constitutional reform, the peace process, and the 2015 presidential elections – would benefit from a wider dialogue if Myanmar is to ensure its long-term stability and prosperity. In Nay Pyi Taw (24-25 March), Myanmar’s capital, they had in-depth discussions with President U Thein Sein, Senior General Min Aung Hlaing (Commander-in-Chief of the Armed Forces), Thura Shwe Mann (Speaker of the Parliament) and U Aung Min (Minister in the President’s Office in charge of the peace process).

Among the topics they discussed were democratic reform, the nationwide census and the challenges of constitutional change. They also discussed prospects for the peace process with the ethnic groups.

They then travelled to Myitkyina (25-26 March) to learn about the unresolved conflict in Kachin State. They met with Chief Minister La John Ngan Sai and his cabinet, and civil society including local elders and peace-building groups. They also visited a camp in the outskirts of the city for people displaced by the conflict, and heard from youth groups trying to address social ailments such as drug addiction and other problems resulting from the growing illegal drug trade.

“As the President himself told us during this visit, Myanmar is a young democracy. We would add that it is also an ambitious one, blessed with an incredibly diverse and energetic civil society wanting to fully operate within the democratic process.

“We met many inspiring groups striving to make a positive impact. We believe the Government should find ways to recognise and consult these constituencies – women’s groups, ethnic groups, youth groups. From the nationwide census to prospects for large-scale development projects, we heard concerns that citizens’ perspectives are not being taken into account.

“Democratic participation is also a requirement for long-term peace. Conflicts often weaken or suspend democracy, while democratic institutions designed to build nationwide consensus reduce the risk of internal conflict. All parties to the conflict should contribute wisely and constructively to help bring about this new beginning.”

In Thailand (27-28 March), the Elders visited Mae La refugee camp and Mae Tao Clinic, on the Thailand-Myanmar border, to observe the long-term impact of the internal conflict and study the well-established service structures established by exiled communities as a result of more than 60 years of civil war. In Chiang Mai, the Elders met with women’s groups to discuss the role of women in the peace process and national reforms. They also met representatives of the ethnic armed groups to hear their perspective on current ceasefire negotiations.

“The communities living across the border, in Thailand, tell a story of hardship and discrimination. It is families in the ethnic border regions who have suffered the most from decades of civil war; who have fled villages through difficult terrains to reach these places for safety.

“But there is also a story, there, of resilience and hope. It is very impressive to see how these communities have, with international support, built good quality clinics, schools and expertise over several decades. This human capacity, inside Myanmar and in exile, is the very basis upon which to build lasting peace and still needs the support of the international community.

“Once a nationwide ceasefire can be agreed by all sides, hopefully soon, there is an opportunity for further trust-building by integrating these services – these doctors and teachers – into the country’s own structures. A country needs a productive, skilled and healthy population ruled by mutual interest and trust.”

In Chiang Mai, they met the Women’s League of Burma and representatives of the United Nationalities Federal Council.

The visit forms part of The Elders’ medium-term work in Myanmar. Following a first visit by Jimmy Carter (former US President), Martti Ahtisaari and Gro Harlem Brundtland in September 2013, the Elders will remain engaged with the democratisation process.

Media advisory: The Elders to visit Myanmar and Thailand on 24-28 March

Gro Harlem Brundtland and Martti Ahtisaari will spend five days in Myanmar and Thailand. With Myanmar opening up politically and economically, The Elders aim to promote inclusive governance and socio-economic justice. 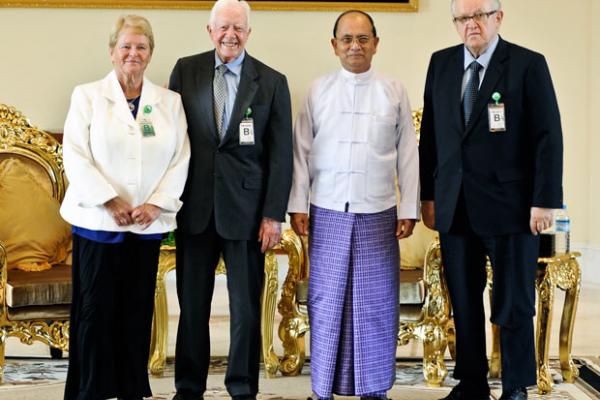 "Our question to everyone on this visit has been: what kind of democracy do you envisage?" – Jimmy Carter
The Elders have concluded their first visit to Myanmar. After hearing from leaders and civil society representatives, they express their support f

This week Jimmy Carter, Martti Ahtisaari and Gro Harlem Brundtland will travel to Myanmar – The Elders' first visit to the country as a group. Find out more about who they plan to meet and what they hope to achieve.
