'Hariyali', a project initiated by Ela Bhatt's Self-Employed Women's Association, has helped give some of India's poorest women access to affordable energy. William French, Head of International Media at The Elders, explains why it has had such a big impact on their lives, writing for The Skoll World Forum and Reuters. 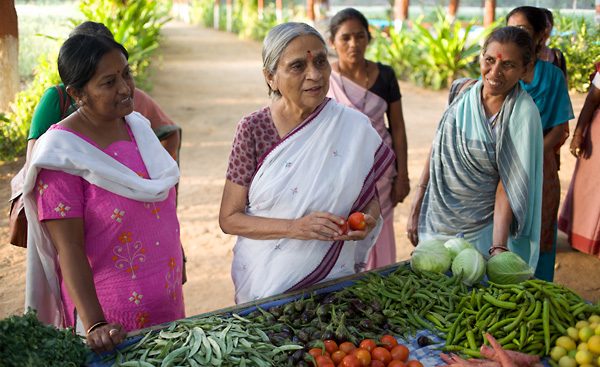 “Till now we always lived in darkness. Now I have a solar lantern, it has brought brightness and light to us. Our hearts and minds are now bright. We see hope in the future.” – Fulaba, a weaver from the village of Khombhali in the Kutch deserts of North Gujarat.

India is an increasingly dynamic player in the modern digital economy, but many thousands of poor and rural communities still have their lives and work dictated by the rhythms of the sun and the moon. A lack of access to affordable energy means sundown equals shutdown, a loss of productivity, efficiency and valuable income.

“No light means we cannot continue to work after sunset. This means less income, and often we cannot afford to eat on the next day”, in the words of Santokben, an artisan from the village of Bakutra in Gujarat.

To break this cycle, the grassroots trade union SEWA (Self-Employed Women’s Association) has been working since 2009 to promote its “Green Livelihoods Campaign” – known as “Hariyali” in the local language – to provide cheap access to sustainable energy across India. SEWA, founded in 1972 by Elder Ela Bhatt, has argued for decades that access to energy is vital in emancipating communities and especially women who are otherwise marginalised both economically and politically.

“The Hariyali Campaign has been structured to deliver Energy Access, financial inclusion and gender empowerment for SEWA’s members,” said Ela Bhatt. “The key to success was in building a model which is sustainable, replicable and scalable.”

In practice, portable solar LED lanterns and clean cooking stoves are provided to SEWA members, paid for by instalments. SEWA has negotiated an unsecured bank loan of Rs 250 million ($4.2 million) from an Indian private bank to provide this service to its members.

The result has been electrifying – in the most literal sense. In the words of Kapilaben, a widow and small farmer from the Gujarat village of Rasnol:

“When my husband died I had to bring up three daughters. Life was dark as we had no electricity and everything felt hopeless. How do I cope? Thanks to ‘Hariyali’ I now have a solar lantern and a cooking stove. Now I do all the work, send all my three daughters to school and am now a grassroots leader at SEWA!”

Underlining the complex nature of its work in a country as vast and diverse as India, SEWA has identified three major challenges which highlight the importance of listening to local communities and learning from their own needs and experiences. It aims to raise awareness, for example of how to use more efficient and healthy cooking stoves; to determine availability so the right sort of stove is delivered to the right people (ie, the stove made for the South Indian population who mainly eat rice isn’t suited to those who eat roti in North and Central India); and guarantee affordability by closely working with local communities and financing partners.

SEWA has also developed “Project Urja” to provide solar lights to women’s self-help groups across the deprived Bihar-Mungar region using a special “energy loan product” in cooperation with India’s Ministry of Rural Development. By February 2013, 177 LED lights had been provided to seven villages, meaning that children could study after dark, the women could cook better meals at night and they could also charge their mobile phones.

For Ela Bhatt, this is a shining example of how innovation and cooperation can transform lives and raise communities out of poverty.

“At SEWA we are looking forward to a bright future where all our existing, as well as new members, make use of energy technology and improve their lives.”

“Poverty is day-to-day violence, no less destructive than war.”
Receiving the 2011 Indira Gandhi Prize for Peace, Disarmament and Development, Ela Bhatt re-examines our idea of peace, arguing that equity, local economies and the empowerment of women

“Empowerment is not a thing that can be given or taken back… when women do things, then that brings the empowerment.”In a video interview with UNICEF, Ela Bhatt discusses how she thinks child marriage can be stopped, how women can be empowered, an

“We all have leadership qualities in us; the question is where does your inspiration come from and how can you contribute?” Gro Harlem Brundtland
From the greatest impediments to peace to ethical leadership, view the highlights of The Elders’ discu

We can eradicate the kerosene lamp from Africa by 2020

“Kerosene is costly, it smells bad, the light is dim, the smoke hurts the eyes. It was that or darkness.”When her uncle bought a solar lamp, Cynaidah Mideva from Nairobi, Kenya, discovered the dangers of climate change and what can be done to halt i