Home

Who we are

The Elders

Ela Bhatt

The ‘gentle revolutionary’; a pioneer in women’s empowerment and founder of the more than 1 million-strong Self-Employed Women’s Association trade union in India; Gandhian practitioner of non-violence and self-reliance.
Meet The Elders  Download Bio 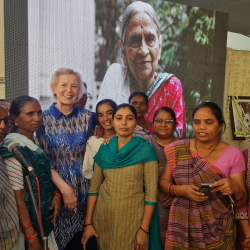 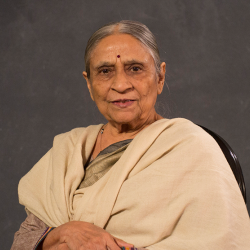 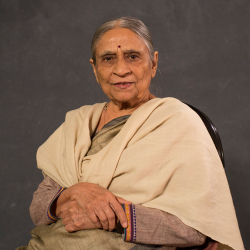 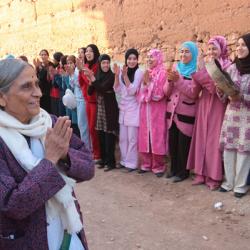 Ela Bhatt steps down from The Elders

Non-violence is not a passive idea. It is ethical activism at its political best.

"Poverty is powerlessness. Poverty cannot be removed unless the poor have power to make decisions that affect their lives."

"A woman who tends a small plot of land, grows vegetables, weaves cloth, and provides for the family and the market, while caring for the financial, social, educational and emotional needs of her family is a multifunctional worker and the builder of a stable society. The word ‘domestic’ in GDP should not be overlooked."

"Absence of war is not peace. Peace is what keeps war away, but it is more than that; peace disarms and renders war useless. Peace is a condition enjoyed by a fair and fertile society. Peace is about restoring balance in society; only then is it lasting peace."

The ‘gentle revolutionary’; a pioneer in women’s empowerment and founder of the more than 1 million-strong Self-Employed Women’s Association trade union in India; Gandhian practitioner of non-violence and self-reliance.


Member of the Indian Parliament


Founding member of The Elders

When The Elders meet with leaders and other powerful people, it is our job to try to persuade them to lead with their conscience and remind them of their duties to the people they serve – even if that message is not what they want to hear.

Ela Bhatt was a founding member of The Elders. From the organisation’s inception until stepping down from her front-line role with The Elders in 2016, she worked tirelessly to improve the lives of the poor and marginalised in society. She was praised by then-Chair Kofi Annan for her "compassion and empathy" and being "an example for us all”.

Profoundly influenced by Gandhian thinking, Ela Bhatt was a fierce advocate for local, grassroots solutions for those who are poor, oppressed or suffering the effects of violent conflict.

Ela Bhatt was particularly involved in The Elders' work on gender equality, including on the issue of ending child marriage. As part of Elders’ delegations, and as one of India’s foremost women’s rights activists, she travelled around India encouraging state governments and civil society to vigorously tackle the issue.

A Gandhian practitioner of non-violence, Ela Bhatt also joined her fellow Elders to encourage peaceful Palestinian protest and self-reliance during Elders’ visits to Israel and the occupied Palestinian territories. Following a visit to Gaza in 2010, she stated that non-violent struggle against injustice requires "more hard work than fighting" and that "it is the coward who uses weapons".

Apart from being one of India’s most committed and known labour organisers and women’s empowerment activists, Ela Bhatt was also one of the early leaders of the microfinance movement. She was rightly known as the ‘gentle revolutionary'.

A lawyer, social worker and pioneer in grassroots development, Ela Bhatt dedicated her life to improving the lives of India’s poorest and most oppressed women workers. After seeing the conditions suffered by poor self-employed women in India and elsewhere in South and Southeast Asia she founded the Self-Employed Women’s Association (SEWA) – a trade union for women workers in India’s huge informal sector. The sector makes up 94% of the female labour force but had never enjoyed the same rights and security as those in formal employment. Her successful leadership of SEWA won her national and international recognition. Today, SEWA has more than 1.2 million members across nine Indian states.

In 1972, Ela Bhatt founded the Cooperative Bank of SEWA. The bank helps women to gain financial independence and raise their standing in their families and communities – and puts into practice the Gandhian principles of self-reliance and collective action.

Ela Bhatt was also co-founder of Women’s World Banking (WWB), a global network of microfinance organisations that assist poor women established in 1979. She served as chair of WWB from 1984 to 1988.

In 1986, she was appointed to the Rajya Sabha (Council of States) by the President of India, the upper house of India’s parliament, where she served until 1989. In the parliament, she chaired the National Commission on Self-Employed Women, which was established to investigate the conditions of poor women workers.

Among other organisations Ela Bhatt has created and inspired is:

She also served as a trustee of the Rockefeller Foundation for more than ten years. In recognition of her work to improve the status of women and the working poor in India and elsewhere, Ela Bhatt was awarded the Indira Gandhi Prize for Peace, Disarmament and Development, the first-ever Global Fairness Initiative Award, the Ramon Magsaysay Award, the Right Livelihood Award, the George Meany-Lane Kirkland Human Rights Award and the Légion d’honneur from France. She has also received honorary doctorates from Harvard, Yale and the University of Natal.