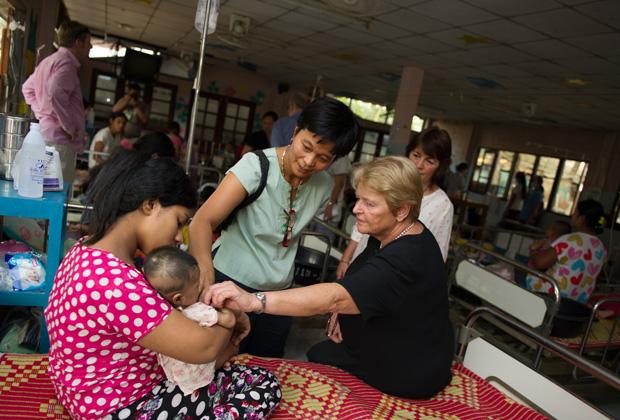 Gro Harlem Brundtland and Graça Machel call on G7 nations to show leadership on achieving Universal Health Coverage. Writing in an opinion piece published around the world, they outline why UHC is crucial to saving lives and driving growth.

Some will say that in a world plagued by conflict, terrorism and economic insecurity, UHC is a utopian dream. But we know this is not true.

Good health is the mainstay of a good life. This may seem like a truism, but for too many people it does not reflect their lives and their children’s prospects.

Hundreds of millions of people are currently denied health services or are plunged into poverty because they are forced to pay unaffordable fees. In some situations, women and children are even detained in hospitals because they cannot pay their medical bills.

This flies in the face of human dignity, and is at odds with countries’ human rights obligations. Following the agreement on the Sustainable Development Goals (SDGs) last September, all countries are now committed to achieving Universal Health Coverage (UHC) by 2030. UHC means that everybody receives the health services they need without suffering financial hardship.

The World Bank, the World Health Organisation and other international institutions all agree that UHC saves lives, boosts economies and stabilises societies.

This is why The Elders have launched a new initiative to campaign for Universal Health Coverage.

We believe UHC makes political and economic sense. When people’s lives are stunted or end prematurely, this is not only a terrible tragedy for them and their families, it is a loss for the community at large. Unmet health needs also reduce economic productivity and stop children and adolescents from realising their full potential in school, at home and later as adults.

Some will say that in a world plagued by conflict, terrorism and economic insecurity, UHC is a utopian dream. But we know this is not true. Before the Second World War, many countries even in prosperous Western Europe did not enjoy universal health coverage and there was a huge discrepancy between the health prospects of the rich and poor.

The post-war human rights revolution changed this forever. Initially across Europe, but then across Asia and the Pacific too, countries launched publicly financed health systems as the bedrock of a new social contract.

In Norway, one of the architects of the public health system, Karl Evang, pioneered this international approach by co-founding the World Health Organisation in 1948. UHC reforms also extended to Latin America and are now spreading to Africa. Poor countries like Rwanda and Ethiopia lead the way.

If this has been achieved in 70 years, how can we possibly say it cannot be achieved in all nations by 2030?

UHC is critical for the SDGs to become a reality. Money should not be the deciding factor for access to healthcare. Heads of state, ministers of health and, crucially, finance ministers must show they have the political will to make UHC a reality. Tough decisions need to be taken and powerful vested interests faced down.

Universal coverage is the ultimate destination but we must get there equitably. Good quality health services should be provided free at the point of use for women, children and adolescents as a first step in a nation’s UHC strategy. To improve access to services and maximise efficiency, countries should focus their UHC packages on primary health care delivered close to where people live.

We firmly believe that only public financing can deliver universal health coverage. A free market where medical services are traded like a commodity will never deliver decent health care to the poor and vulnerable.

But UHC is about more than just financing. Countries will need to strengthen their health systems in areas such as human resources, medicines, infrastructure and information systems.

Nelson Mandela, founder of The Elders, once said that there were four basic and primary things people wish for: “to live in a safe environment, to be able to work and provide for themselves, to have access to good public health, and to have sound educational opportunities for their children”.

We believe UHC is key to realising this vision, and are encouraged by the growing international consensus that it is an “affordable dream.” That is why we urge the G7 nations to show leadership and to make political and financial commitments to UHC at their upcoming summit in Japan. This would be a clear signal from the most powerful economies that “business as usual” will not do if the world is serious about implementing the SDGs.

Access to health care is a fundamental human right. No mother should lose a child, or lose her own life, because she cannot afford health care. When ministers decide their actions and priorities, The Elders will act as a “voice for the voiceless” and campaign for truly universal health care as a human right for all. 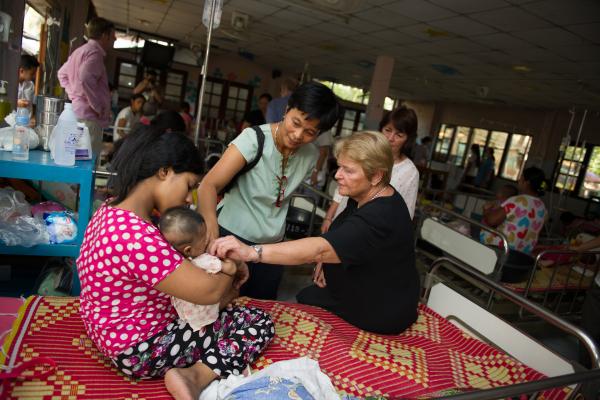 The Elders launch a new initiative to promote Universal Health Coverage (UHC) at the Women Deliver conference as part of the organisation’s mission to support equality, social justice and sustainable development.