We need to think differently about women

"We cannot sit and pontificate, or wring our hands and hope someone else does the hard work." To mark International Women's Day, Graça Machel and Desmond Tutu urge all of us, men and women, to question what is preventing gender equality and to make a commitment to empowering women.

Every year, International Women’s Day offers all of us the opportunity to reflect on the many contributions women make to our shared existence. It is a day to hail women in political leadership, executives, investors, entrepreneurs, innovators, scientists, artists, activists, women in sports. But women’s work is vital at every level in our Global Village, so let us also recall the unsung achievements of women. Women in: agriculture; the health profession; in education; the carer; the nun and, yes, the mother and grandmother.

At the same time though, International Women’s Day should cause us to ask some hard questions of those who run our societies, and indeed of ourselves – men and women. How is it that in 2015 girls can be kidnapped and murdered just for going to school? How can millions of girls still be subjected to the tortures of female genital mutilation? How does women’s pay still lag behind men’s in almost every society worldwide? How are women still systematically under-represented in senior positions in major professions from politics and law to journalism and business?

As Elders, we understand the importance of acknowledging cultural traditions and customs but this is no excuse for continuing to discriminate against half the population. The belief that women do not deserve equal treatment underpins violence against them, and is used to deny fair access to education, health, employment, property and influence.

The failure to root out prejudice against girls and women is one of the major barriers to progress and prosperity. Gender discrimination also breaches international human rights agreements and domestic laws in most countries. 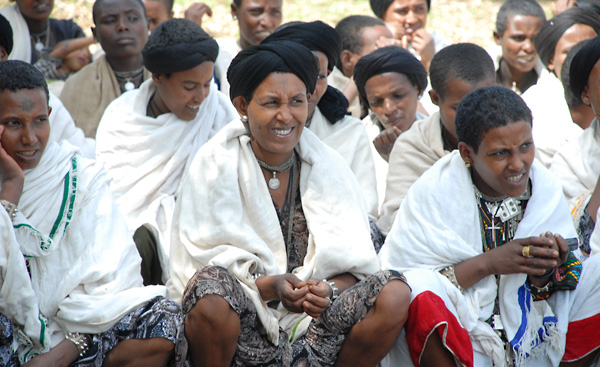 Women in Amhara, Ethiopia, many of whom married as girls. The Elders visited their community in 2011 to hear about a project promoting girls' education and discouraging child marriage. Photo: Ashenafi Tibebe | Girls Not Brides

Above all, women and men the world over should urge governments to face up to their responsibilities and truly act as leaders, not just rulers. Twenty years after the landmark Beijing Declaration and Platform for Action, too many women are still second class citizens, unable to fulfil their potential and choose their own way of life. In the words of UN Women, “nearly 20 years after the adoption of the Platform for Action, no country has achieved equality for women and girls and significant levels of inequality between women and men persist.”

The official slogan for International Women’s Day 2015 is “Make It Happen”. It means we cannot sit and pontificate, or wring our hands and hope someone else does the hard work. Change begins with all of us: in the home, in the community and in every institution. Let us choose our words with care and make our voices heard – but let our words be backed up by a real change in attitude and commitment to women’s equality.

Join Archbishop Tutu and Graça Machel as they hold a Twitter Q&A on 6 March at 1400GMT to discuss how we can catalyse women’s empowerment this year. You can post your question now using #askElders.