Women at the heart of sustainable peace

‘No society can develop – economically, politically or socially – when half of its population is marginalised’ Speaking at the annual Desmond Tutu International Peace Lecture, Mary Robinson champions women as agents of change, from addressing conflict to climate change.

A peaceful world requires not only the end of conflict but also the end of the kind of injustices – poverty, inequality, the risks posed to development by climate change – that plague our world.

Women’s participation in the prevention and resolution of conflicts is critical to building sustainable peace because no society can develop – economically, politically or socially – when half of its population is marginalised.

So how do we put women at the heart of sustainable peace?

In international law, the starting point is UN Security Council Resolution 1325, which stresses the importance of women’s equal participation in all efforts for the maintenance and promotion of peace and security. It also promotes special measures to protect women and girls from gender-based violence in situations of conflict. Mary Robinson speaking at a conference convening one hundred women to discuss the role of women in peace and security, July 2013

In 2009 I was asked to chair a civil society advisory committee to the UN on Resolution 1325 to see how we could strengthen it and demand implementation. With Bineta Diop, then Executive Director of Femmes Africa Solidarité, I conducted hearings where we encouraged women civil society leaders to share their perspectives and analyses.

I recall one woman saying that ‘a typical peace process involved bad men forgiving other bad men in fancy hotels in front of television cameras!’

We learned about the initiatives women were taking, including pressing for national and regional Plans of Action under Council Resolution 1325. The UN Secretary-General committed to appoint more women as his special representatives in post conflict countries.

Bineta Diop and I then persuaded Ugandan President Museveni to hold a ministerial Security Council meeting on the issue in October 2010 while Uganda held the Security Council chair. It was one of the longest and best attended Security Council meetings ever, where participating government ministers, including US secretary of state Hillary Clinton, agreed to raise the profile of women’s issues bringing them further into the public conscience, and to strengthen significantly the application Resolution 1325.

Women as agents of change

In February 2013, Secretary-General Ban Ki-moon appointed me as his Special Envoy for the Great Lakes Region of Africa. I was the first woman appointed as a senior mediator in a conflict situation. It was clear to me that as a woman, I would somehow have to try to do this differently, I would have to strengthen the resolution on women, peace and security. Not just talk, but action. The Great Lakes region has been plagued by decades of political instability, armed conflicts and humanitarian crises. The use of rape as a weapon of war in the conflict – the degree, methods and viciousness of the use of sexual violence – has been well documented.

My role as special envoy would involve formulating a plan of action for Heads of State to implement a ‘Framework of Hope’, with the goal of moving towards sustainable peace in the region. The Heads of State were all men. When I asked them each to nominate a suitable candidate to plan and guide the oversight mechanism for the Framework, all of them nominated men.

So, how to mitigate this clear gender imbalance?

We had to do more. We had to change approach, so that the process involved not just political leaders – the men – but also all of civil society, including women.

Women in the region have been subjected to extreme brutality – including sexual violence – during the conflict, but they have also cared for their families and emerged as leaders in their communities while the men took up arms to fight. We had to broaden women’s role to include participation in the high-level negotiations traditionally the realm of the elite men.

Mary Robinson visits a health facility treating women who are victims of sexual violence in the Democratic Republic of the Congo. Photo: UN Photo | Sylvain Liechti

To counterbalance the men-only Framework of Hope support committee, I initiated a parallel platform for ‘women’s voices’ in the region. Launched this year, it aims to provide support for women’s groups.

We are not there yet, and the work required to unravel this complex conflict, to effect political transition and reconstruction, to develop structures for post-conflict justice, and to ensure security, including economic and social security, is very much ongoing and requires continued monitoring and scrutiny.

We simply cannot have a peaceful and prosperous future unless we act on climate change.

Climate action is an area where women across all sectors of society are leading the way in efforts to build resilience and adapt to the impacts of climate change.

Women like Maite Nkoana-Mashabane, South Africa’s Minister for International Relations and Cooperation who presided over the 2011 UN Climate Change Conference, COP17 in Durban, which lead to ‘the Durban Platform’ agreement.

Mashabane, and women like Connie Hedegaard and Patricia Espinosa, who agreed to lead a Troika of Women Leaders on Gender and Climate Change. Together, we plotted to bring gender balance into all future COPs, and to have gender as a standing item on the Agenda. The Doha COP in 2012 was chaired by a man, but we had organised so effectively that he was willing to put the issue for negotiation. Christiana Figueres speaks at the Doha climate summit, with Mary Robinson among the panellists on stage, November 2012. Photo: UNClimatechange (UNFCCC)

I will never forget the emotion in the hall when the decision was adopted to have gender balance in all delegations to the COP, and in bodies such as the Green Climate Fund, and to work for gender sensitive climate policy. Christiana Figueres, the Executive Secretary of the UN Framework Convention on Climate Change (UNFCCC) called it the ‘Doha Miracle’ as we clapped and cheered and hugged each other!

Two weeks ago, on the eve of the New York Climate Summit, my foundation, together with UN Women, co-hosted a Women’s Leadership Forum. Women politicians, leaders from grassroots, civil society, the private sector, the scientific community, and the UN system came together to demonstrate women’s leadership on climate action and highlight gender-responsive actions at all levels.

At the concluding ceremony of the Climate Summit a great woman leader spoke, and she spoke on behalf of The Elders. Graca Machel reminded the delegates gathered about ‘courage, leadership and obligation’ and told them bluntly: ‘I have the impression that there is a huge mismatch between the magnitude of the challenge and the response that we heard here today.’

She told them they need to go back to the drawing board and ask hard questions, and to step up ambition. That was real leadership!

This blog was adapted from Mary Robinson's speech at the fourth annual Desmond Tutu International Peace Lecture, delivered on 7 September 2014.

“Soldiers feel this is one of the perquisites of victory – to abuse women and even tiny girls and children – just to prove that they are superior.”In a video message to a major summit on sexual violence taking place this week, Jimmy Carter argue 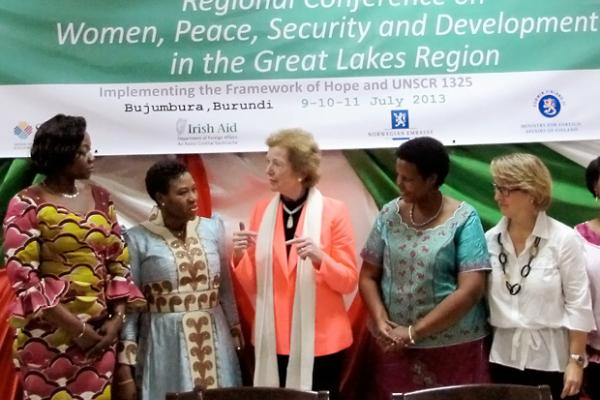