The Elders Foundation is delighted to announce the appointment of David Nussbaum as Chief Executive Officer from October 2016.

The Elders Foundation is delighted to announce the appointment of David Nussbaum as Chief Executive Officer (CEO). As CEO, David will manage the London-based Secretariat and lead the work of the organisation. He will take up his appointment in October.

David is currently Chief Executive of WWF-UK. WWF is the leading global environmental organisation which operates in some 100 countries. He has held this post since 2007.

“After a rigorous and extensive global search, I am very pleased to be able to announce David’s appointment. He has distinguished experience in the management of not-for-profit organisations and is a real leader in the field of international development. My fellow Elders and I look forward to working with him.”

A British citizen, David graduated from Cambridge and Edinburgh Universities where he studied theology. He spent the early part of his career in the finance sector before moving to the not-for-profit sector in 1997.

Starting at Oxfam, he became a Deputy Chief Executive and also served as interim head of its India programme. He then moved to Transparency International at its International Secretariat in Berlin, from 2002-2007 where he was Chief Executive. David also holds a number of advisory and non-executive director positions in the commercial and not-for- profit sectors.

“It is with absolute delight that I look forward to joining The Elders. I’ve followed the lives of a number of them with admiration for many years, and it’s a wonderful opportunity to have the chance to support them directly in their work. In today’s global society – with so many complex challenges – I’m convinced that the role the Elders can play is increasingly both relevant and needed. I will be working with the Elders and the Secretariat team as we continue to build upon past interventions to make a positive difference to the future of our shared world.”

David succeeds Lesley-Anne Knight who retired as CEO of The Elders in March 2016. Andrew Whitley will continue to act as Interim CEO until David assumes the position. 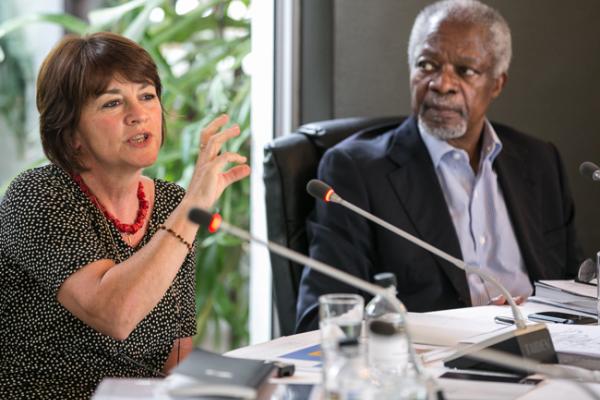 Lesley-Anne Knight retires as CEO of The Elders

The Chair of the Elders, Kofi Annan, today announced the retirement effective 18 March 2016 of Ms Lesley-Anne Knight, the Chief Executive Officer of The Elders.