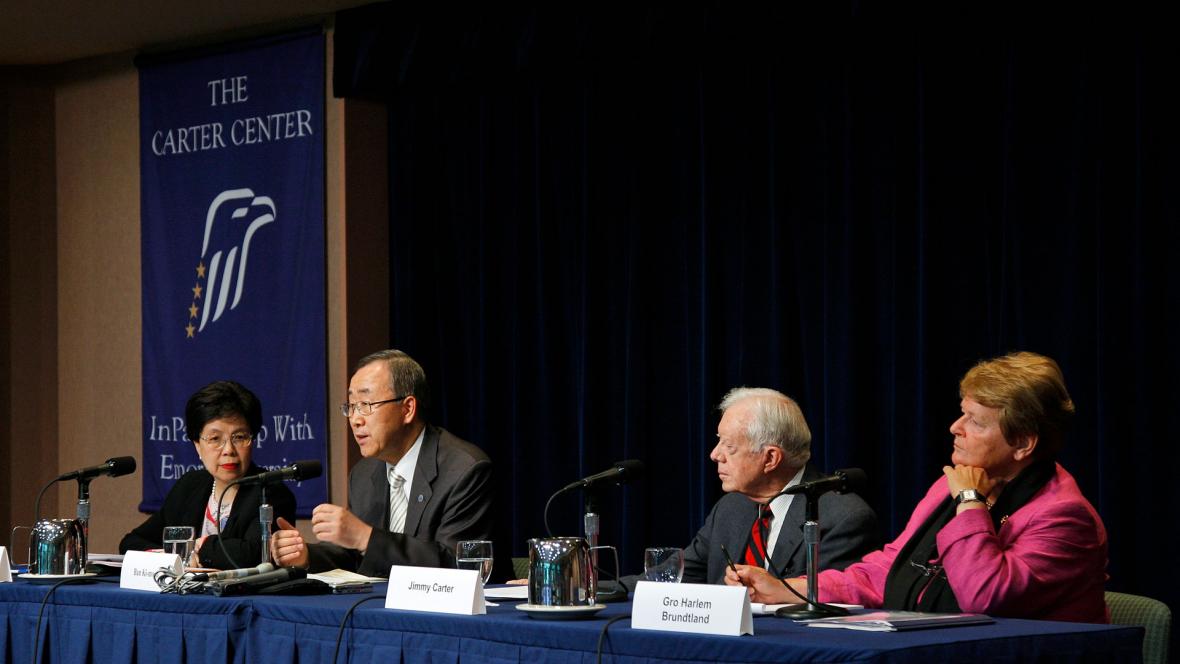 The Elders bring health leaders together and call for a shared commitment to strengthening national health systems around the world.

The global health system may be as strong as its weakest link. Some states suffer from a weak and crumbling health infrastructure, and their populations are vulnerable to disease as a result. Achieving the Millennium Development Goals is jeopardised and efforts to eradicate diseases are compromised. The Elders therefore have used their convening power to reach out to leaders of health financing agencies in the public, private and philanthropic sectors to seek a shared commitment to strengthening national health systems around the world. Leading the effort on behalf of the Elders are former President Jimmy Carter, former Prime Minister Gro Harlem Brundtland and former President Mary Robinson.

Most recently these three Elders joined UN Secretary-General Ban Ki-moon in convening a May 8-9 meeting at the Carter Center in Atlanta, Georgia, to consider strategic ways for public and private institutions as well as civil society to intervene on critical global health priorities and harmonise their respective health programs so as to assure coherent action to transform commitments into lives saved.

Leaders of major health institutions and agencies, including the heads of the World Health Organization (WHO), UNICEF, UNFPA, UNAIDS, the Global Fund to Combat AIDS, Tuberculosis and Malaria and the World Bank, as well as private sector actors, leaders from civil society, research institutes and foundations including Rockefeller, Gates and MacArthur took part in the day-long session preceded by a dinner conversation among them.

The meeting focused on three topics identified by the Elders and the Secretary-General as priorities in the area of global health – strengthening health systems, advancing maternal health and addressing neglected diseases. During the meeting a press conference was held with Secretary-General Ban Ki-moon, WHO Director-General Margaret Chan, Jimmy Carter and Gro Bundtland to describe their conclusions and shine the spotlight on the issues discussed during the conference. As President Carter noted during the press briefing, Secretary-General Ban Ki-moon’s commitment to global health issues is unswerving. All participants pledged to continue to work in close consultation.

With this meeting, The Elders deepened its partnership with the Secretary-General and the many inter-governmental agencies, private corporations and philanthropic institutions that share a commitment to the cause of global health.

The following individuals participated in the Global Health Meeting: