Home

News & Insight

Statement

The Elders: the leaders of Sudan and South Sudan have brought their countries closer together
Statement

The Elders: the leaders of Sudan and South Sudan have brought their countries closer together

The Elders welcome commitment towards peace by Sudan and South Sudan, after the two countries reached agreements on oil, trade, a demilitarised buffer zone, and protections for the welfare and safety of their people. They urge leaders of both nations to build on the momentum by resolving the remaining issues.

The Elders welcome warmly the historic agreements on trade, oil, border issues and the status of nationals signed by Sudan and South Sudan in Addis Ababa on 27 September. Although several crucial issues remain unresolved, overall the deal holds promise for the future safety and welfare of their respective people after months of escalating tensions.

The lives of ordinary people in both countries could be dramatically improved by these agreements, which open the door to the resumption of oil flows and trade and offer a mutual guarantee of rights of movement, property, residence and work for Sudanese and South Sudanese citizens living in the other country. During their visits to Khartoum in May and Juba in July, The Elders called on President Omar al-Bashir, of Sudan, and President Salva Kiir, of South Sudan, to put the well-being of their people first.

The Elders further welcome a key aspect of the deal: the establishment of a 10-kilometre demilitarised zone between Sudan and South Sudan. If fully implemented, this buffer zone will go a long way towards reassuring both sides that their security will be assured. The African Union (AU), supported by the international community as a whole, must ensure that the provisions for this buffer zone are effectively implemented and monitored.

The Elders congratulate Presidents Kiir and al-Bashir on their bold commitment to peace. They also commend former South African President Thabo Mbeki, Chairperson of the African Union High-level Implementation Panel (AUHIP) and the AUHIP for their skill and persistence in helping to reach this positive outcome. The Elders pay tribute to the efforts of the late Ethiopian Prime Minister Meles Zenawi and thank his successor, Hailemariam Desalegn, for their roles in facilitating these talks.

The Elders hope that the leaders of the two countries will build on this momentum to address, in particular, the demarcation of the borders and the status of the disputed oil-rich area of Abyei. They also emphasise the urgent need for the conflict between the Sudan Armed Forces and the Sudan People’s Liberation Movement-North (SPLM-N) to be resolved in the Sudanese states of South Kordofan and Blue Nile. On the occasion of the International Day of Peace, 21 September, The Elders called for a humanitarian truce in Blue Nile and South Kordofan to allow vital aid to reach all those affected by the violence.

The Elders’ work on Sudan and South Sudan

Peace in Sudan has been a priority for The Elders since the group’s formation. In October 2007, shortly after The Elders’ launch by Nelson Mandela, they visited Khartoum, Juba and Nyala (Darfur) to highlight the human impact of the conflict.

Since then, The Elders have conducted private diplomacy and advocacy, speaking out at key moments, and supporting the AU High-level Implementation Panel (AUHIP) in its efforts to facilitate the resolution of outstanding issues between North and South. Members of The Elders visited Sudan in January 2011 as part of the Carter Center’s observation mission of the South Sudan Referendum.

In view of the deteriorating security and economic situation in Sudan and South Sudan and the human impact of the conflicts in Blue Nile and South Kordofan in particular, The Elders are stepping up their engagement in the region and seek to offer their collective experience and support to help tackle these urgent challenges.

In May 2012, Lakhdar Brahimi and Jimmy Carter met President al-Bashir in Khartoum. In July 2012, Desmond Tutu, Martti Ahtisaari and Mary Robinson travelled to South Sudan, to meet President Kiir and civil society representatives, and to visit Yusuf Batil refugee camp, near the border with Sudan. They also travelled to Ethiopia, where they met then-Deputy Prime Minister and Minister of Foreign Affairs Hailemariam Desalegn and members of the AUHIP, including President Mbeki and former President of Burundi Pierre Buyoya.

On Peace Day, The Elders call for a truce in Blue Nile and South Kordofan, Sudan

“A day to realise the noblest dream there is: peace; an end to violence everywhere, within our homes, on our streets and between our societies, for the safety and dignity of all.” Desmond Tutu
This year, to mark the International Day of Peace, The El 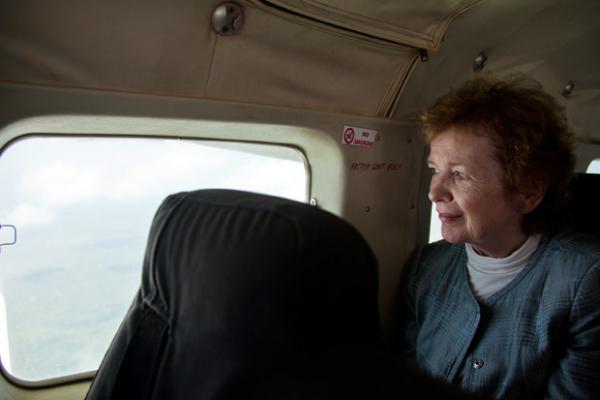