Fernando Henrique Cardoso: "Wherever democracy is at risk, there is Carter"

Writing in Americas Quarterly, Fernando Henrique Cardoso pays tribute to his fellow Elder, Jimmy Carter, outlining his relationship with Latin America, their friendship and his role a "great moral leader of our time". 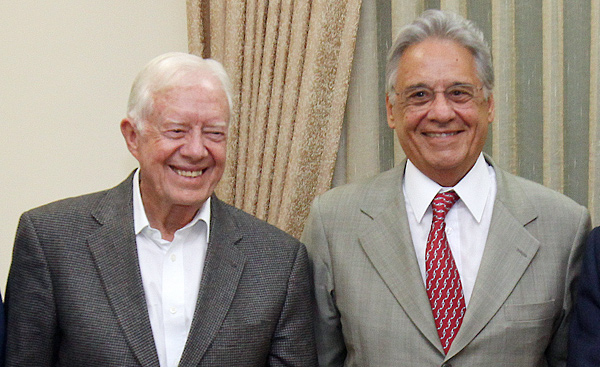 In 1977, I was working as a fellow at the Institute for Advanced Study at Princeton University when, one fine day, the telephone rang. It was Robert Pastor, a special adviser at the White House, inviting me to Washington. Pastor was a friend, himself a political scientist, who had helped me overcome difficulties obtaining a visa to enter the United States – since, during those years, I was suspected of “anti-American activities.” How times change.

From Princeton to Washington isn’t far, and I went by train. Pastor received me with affection and to my surprise he told me President Jimmy Carter was planning a visit to Brazil. In fact, his wife, Rosalynn, had gone ahead of him and was already there.

That’s interesting, I thought. But what does this have to do with me?

This was the height of Brazil’s military dictatorship, which since 1964 had been strongly supported by successive governments in the United States. Pro-democracy voices such as myself had been marginalised or pushed into exile. But now, the recently inaugurated President Carter, known for his liberal ideas and his commitment to human rights, wanted to make contact while in Brazil with figures who opposed the regime.

Pastor and I spoke about who could give President Carter an overview of what was really happening in our country. And indeed, his Brazil visit of March 1978 would be largely remembered for his meeting with Cardinal Paulo Evaristo Arns, Archbishop of Sao Paulo, one of our firmest defenders of human rights. Carter, who also met with President Ernesto Geisel, was criticised by some for not being explicit in his condemnation of the regime’s abuses. As if it were possible for a foreign head of state to make such public criticisms on an official visit…

In any case, Carter’s gesture was sufficiently bold that it reverberated in Brazil for years afterward. The military regime no longer enjoyed unconditional support from Washington – a fact that was not lost on the generals, or the opposition. Thanks to the hard work of committed activists and pressure from the Brazilian people, the military finally yielded power in 1985.

The trip carried a cost for Carter himself, however. During the 1980 US presidential campaign, allies of Ronald Reagan accused Carter of taking relations with Brazil and other authoritarian governments to a low point in the name of human rights. Carter stood by his principles, of course. He lost his bid for reelection. Yet you could say that America’s loss was our gain. Carter’s good works in the region – and the world – were only beginning.

Jimmy Carter returned to Brazil in 1985, the year military rule ended, and was warmly received by both civilian presidential candidates, who duly thanked him for his role in the transition. He received a similar welcome in Peru and Argentina, which were also newly democratic. It was already clear to everyone that Carter had, simply, been a little ahead of the times.

To my recollection, I didn’t meet Carter in person until a decade later, when I was president. I remember he brought me a copy of his memoirs, Keeping Faith. I liked him right away; I hope it was mutual. After leaving the presidency in 2003, I was invited by Nelson Mandela to form part of “The Elders,” a group of 11 former leaders that included Carter, and there our friendship began to blossom.

It’s worth noting that, when Carter recently fell ill abroad, leading to the detection of his cancer, he was in Guyana monitoring an election. This was no coincidence. Few American presidents, if any, have displayed such intense, dedicated engagement with Latin America. Wherever democracy is at risk, there is Carter, whether in Venezuela (where the Carter Center closed its doors earlier this month, due to lack of freedoms) or Zimbabwe, where he has pushed for free elections without even being able to enter the country.

Indeed, time and again, I have seen how Carter has selflessly embraced worthy causes, seemingly redefining the laws of both age and how former presidents are supposed to act. I watched from afar his actions in South Sudan, North Korea and Myanmar. With the Elders, we went together to Israel and the West Bank. We visited the Atlas Mountains in Morocco, and attended the “Rio+20” environmental summit in my country. I saw him when the Elders gathered in Atlanta last year to celebrate his 90th birthday, and most recently in London.

During all these years I have seen a Carter who is courageous, kind, reasoned, possessed of an extraordinary physical energy and, above all, a commitment to fundamental values: liberty, democracy, human rights, and the need to hear those who don’t have a strong voice. At the same time, he is tremendously human – a deeply religious figure who writes poetry to express his love, not just to Rosalynn and his family, but to people, to his fellow man.

These qualities have inspired many of us to be better leaders, and better people. And they move us now to stand in solidarity with Jimmy Carter, my friend, a friend to Latin America, and a great moral leader of our time.

"All of my passion and all of my strength will go into this, for the rest of my life."
In an interview with Annick Cojean from M, Le Monde’s magazine, Jimmy Carter discusses his work to end discrimination and abuses against women and his new book on th