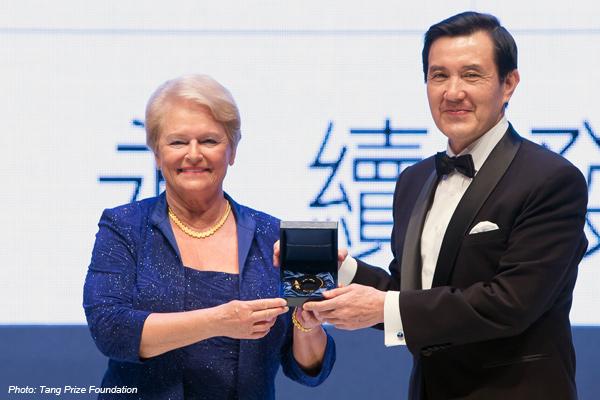 “The world has been much too slow to seriously respond to the clear and mounting evidence before us.” Gro Harlem Brundtland receives a prize for her work on sustainable development in New York and implores leaders to take bold decisions to address climate change. Described as Asia’s equivalent to the Nobel Prize, the Tang Prize recognises contributions to science and the humanities. Gro Harlem Brundtland took the opportunity to urge leaders to respond to our rapidly changing world, establishing a “new universal climate agreement in 2015”:

The need for action, now not tomorrow

Warning of the urgency of addressing climate change, “The world has been much too slow to seriously respond to the clear and mounting evidence before us”, Gro Harlem Brundtland’s comments echo the frustrations of the hundreds of thousands of people who took to the streets in marches across the world this week, demanding action:

“The world at present is moving towards a 4 degree Celsius scenario, not the 2 degree one that our leaders have committed to.”

“The marketplace has to reflect the full ecological and human costs of economic decisions and establish price signals that make transparent the consequences of both of action and inaction.”

On fossil fuel subsidies she argued:

“Pollution, including carbon emissions, can no longer be free; subsidies should be made transparent and phased out for fossil fuels by 2020; and build new ways to measure development beyond GDP.”

“As long as we all live on the same planet, we will have to make it happen for all of us, or it will not happen at all. I believe we can do it. There is no alternative path ahead.”

"Governments have no excuse not to act on climate."Our CEO Lesley-Anne Knight explains why The Elders have written to all heads of state calling for bold, concerted action ahead of a major climate summit in December 2015.