Writing in Project Syndicate, Lakhdar Brahimi highlights the horrors of the Syria crisis, including the recent thousands of migrants who lost their lives attempting to cross the Mediterranean Sea, and calls on the public as well as politicians to turn apathy into action.

"It is vital that, no matter how grim or upsetting the situation in Syria becomes, we do not tune it out or simply seek to turn the page." 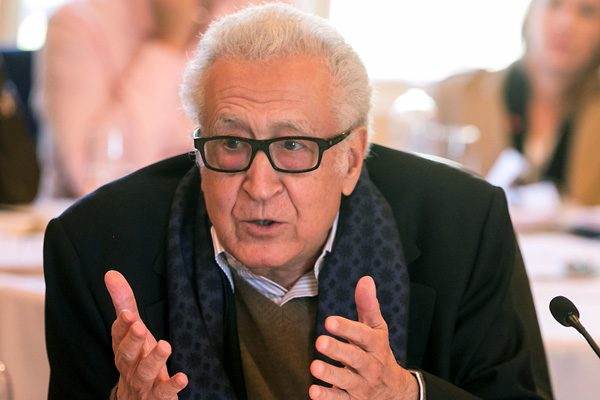 LONDON – Over the past four years, Syria has been the scene of terrible suffering and savagery. But the recent assault on the Yarmouk Palestinian refugee camp in Damascus by Daesh (Islamic State) fighters has shocked and appalled even the most hardened observers.

The capture of the camp leaves 18,000 refugees at risk of slaughter, unable to access food, water, and vital services. Conditions there – according to Christopher Gunness, a spokesman for the United Nations Relief and Works Agency for Palestine Refugees in the Near East – are “beyond inhumane.” The attack reminds us once again that Syria’s agony can be ended only by concerted international action.

When protests against President Bashar al-Assad’s authoritarian regime first broke out in 2011, few could have imagined the catastrophe that Syria would suffer. The war has claimed more than 200,000 lives and devastated Syria’s social and economic fabric.

The conflict has led to atrocities on all sides, including mass executions, kidnapping, torture, the use of chemical weapons, and the deployment of barrel bombs. Some 12 million people have fled their homes, and many have left the country altogether, placing a heavy burden on neighboring states like Lebanon and Jordan. More than three million children are no longer in school.

The international community has been unable – and, to some extent, unwilling – to stop the war or end Syria’s suffering. Former UN Secretary-General Kofi Annan and I have had first-hand experience of the crisis. We both tried to bring the combatants to the negotiating table and end the killing. And we both failed.

In the meantime, the world took far too long to wake up to the global danger posed by Daesh. It will take more than the ongoing bombing campaign to end the group’s atrocities in Syria and Iraq. A comprehensive resolution of the conflict is urgently needed. But this will be possible only if the main regional players – Iran, Jordan, Qatar, Saudi Arabia, and Turkey – work with the international community to generate the political will to act. Unfortunately, there are few signs that such cooperation will happen anytime soon.

The responsibility for our collective failure and inaction is not confined to international diplomats and policymakers; it is shared by all of us. And yet too many people, confronted by such vast suffering, have become numb and apathetic. It is vital that, no matter how grim or upsetting the situation in Syria becomes, we do not tune it out or simply seek to turn the page.

Nowhere is this more apparent than in the terrible spectacle of thousands of Syrian refugees, crammed into rickety vessels, attempting to cross the Mediterranean Sea. In the past year, some 4,000 men, women, and children have lost their lives in this perilous crossing. But this has not deterred thousands of others from risking the same journey and putting their lives in the hands of human traffickers and criminal gangs.

Incredibly, the European Union’s response to the drowning deaths in the Mediterranean has been to cut the budget for the naval response unit charged with monitoring refugee crossings and rescuing shipwreck survivors. This not only flies in the face of morality; it is also counterproductive.

The current focus on border security has resulted in inadequate, uncoordinated, and poorly designed policies that force migrants to resort to illegal and dangerous channels. And yet national governments throughout the EU, it seems, are too afraid of – or too beholden to – anti-immigrant sentiment among their electorates to show common humanity to refugees.

In a conflict as bitter, protracted, and complex as the war in Syria, it is all too easy to become overwhelmed by despair. Some international broadcasters have even found that their audience share drops when they delve into the conflict. It can be difficult for ordinary citizens to feel hopeful when governments and international institutions have been unable to stop the war and refuse to protect refugees.

The Algerian-born French author Albert Camus wrote, “In such a world of conflict, victims, and executioners, it is the job of thinking people, not to be on the side of the executioners.” It is in this spirit that I call on people around the world to pressure their governments to implement policies that protect and shelter Syrian war refugees. Taking care of those displaced by the conflict is the least we can do. For the world’s sake, the Syrian people must not be forgotten.

Sympathy for the migrant

“States that tighten their borders encourage desperate people to take greater risks to cross them.”
Urging governments to rethink their immigration policies, Kofi Annan calls for a more compassionate approach to those seeking refuge or economic oppor

"A day to remind the world that we need more humanity"

“We can and must do more to live up to our human duty to help and protect those in dire need.”
Marking World Humanitarian Day, senior OCHA official John Ging outlines the importance of humanitarian assistance, the challenges aid workers face, and wha

Lakhdar Brahimi steps down as special envoy to Syria

"I’m sure that the Syria crisis will end. The question is only this: how many more dead? How much more destruction?"&nbsp;
Announcing his resignation as Joint Special Representative for Syria yesterday, Lakhdar Brahimi and Ban Ki-moon gave a joint pres