'Rebuild Gaza, and avert the next war'

Writing in The Washington Post, Jimmy Carter argues that an end to Gaza's isolation is essential for a future Israel-Palestine peace deal.

"As long as Palestinians remain divided, it will be difficult for any leader to sell to the Palestinian people a peace agreement with Israel." 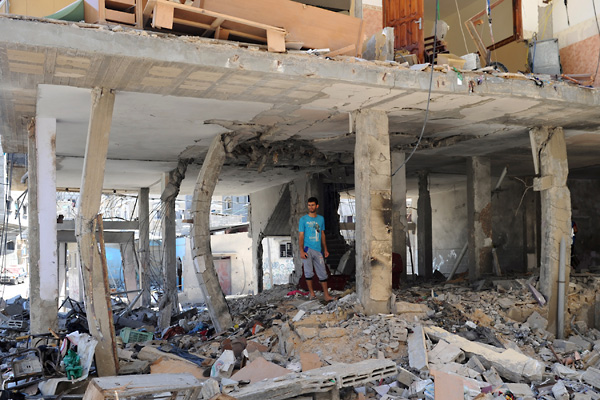 Nearly seven months after the end of the latest war in Gaza, none of the underlying causes of the conflict have been addressed. In the meantime, the people of Gaza are experiencing unprecedented levels of deprivation, and the prospect for renewed armed conflict is very real.

In June 2014, the Hamas-backed government in Gaza was dissolved, and a reunified Palestinian Authority cabinet was created under the leadership of Palestinian President Mahmoud Abbas. The international community reached a consensus, with tacit support from Israel, to empower this government to lead reconstruction in Gaza and, together with the United Nations, to track the delivery and use of building materials to address fears that cement and other supplies could be diverted to build tunnels into Israel.

The $5.4 billion pledged for rebuilding was predicated on the Palestinian Authority asserting itself in Gaza. However, relations between Hamas and its political rivals, Abbas’s Fatah party, remain fraught. The authority has proven unwilling or unable to govern in Gaza. As a result, the promised reconstruction money has not been delivered.

The shortage of funds is the most immediate problem, but it is not the only one: Israel has restricted access to Gaza, with three of four commercial crossing points closed. There is not enough money to buy building materials or support needy families. The Shelter Cluster, which coordinates housing construction between the United Nations and non-governmental organisations, estimates that Gaza needs at least 16,000 new units to replace homes destroyed or rendered uninhabitable during the war. In January, 16 truckloads of construction material were permitted into Gaza per day, compared with a need for 735 loads daily for three years to build the necessary homes. These numbers do not account for the additional 5,000 homes that still need to be rebuilt from previous wars or another 80,000 homes necessary to accommodate population growth.

The international community, including the Obama administration, should be given credit for recognising the need to unify the Palestinian political system in order to address the humanitarian crisis in Gaza and stabilise the security situation. However, this consensus must now be backed by sustained pressure to implement reconciliation agreements between Fatah and Hamas and to end Israel’s closure of Gaza. It is incumbent on the world to engage at the highest levels with the Palestinians, Egypt and Israel to push this process forward.

If there is no reconciliation, the international community must be willing to promote new arrangements for rebuilding Gaza and ending its isolation. Donors will have to coordinate directly with local and international NGOs, as well as the de facto Hamas authorities, while continuing to urge that the current Palestinian government of national consensus deploy in Gaza.

In addition, Western governments should push Israel to drop its insistence on tracking every bag of cement. The evidence suggests that such fine-grained monitoring may be impossible, but tunneling can be prevented with a supervised peace agreement. Further, by insisting on such oversight, Israel may be compromising its security in the short term, given the misery and volatility in Gaza. Instead, Israel should align the import-export regime for Gaza with that of the West Bank, and Gaza crossing points should be reopened. More generally, Israel should integrate the economy of Gaza with that of the West Bank to allow for more normal development.

Legal and human rights experts Shelly Cohen and Noa Diamond describe how Palestinians in East Jerusalem have lived for over a decade under a 'temporary', "discriminatory and racist law."

Gaza must be rebuilt now

Writing in The Guardian, Jimmy Carter argues that the suffering of those under seige in Gaza demands the bold action of Quartet members - Russia, the United States, the European Union and the United Nations.