While in Moscow last month on an Elders' visit, Kofi Annan shared with Kommersant’s Elena Chernenko his impressions of the meeting with President Putin, The Elders’ advice on achieving a settlement in Ukraine and the consequences of failing to reform the UN Security Council. 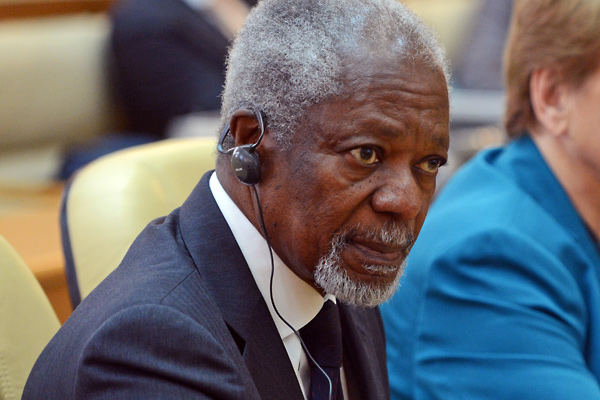 Kommersant: In Moscow, you heard the Russian view of the global events, including from President Putin. What conclusions did you draw?

Kofi Annan: We had a very good conversation with the president. Just like him, The Elders are concerned about the geopolitical conflicts that we face today. We believe that we must do our best to de-escalate the situation in these hotspots to make our planet a more peaceful and stable place to live. We talked about Ukraine, the Middle East, the spread of terrorism and extremism, and also ways to deal with these challenges. It was a very useful visit.

Were you surprised by anything you heard from Vladimir Putin?

Not really. He was very candid and described to us his view of the situation. Just like us, he believes that the Minsk agreements must be fully implemented. The leaders of four states [Russia, Ukraine, France and Germany] signed this document. They spent a lot of time drafting it and put their reputations on the line. Implementing these agreements won’t be easy. But this is the starting point for moving forward.

Did you hear anything that you don’t agree with?

I told you everything I could. I don’t blame you for asking this question: journalists are often interested in the details of our conversations with heads of state, and I always try to share some details. But if I tell you everything we discussed, next time President Putin sees me he will only talk to me about the weather [laughs]. 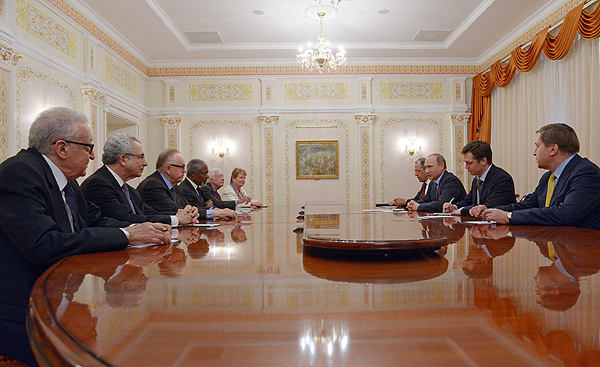 The Elders are supposed to find ways to resolve crises. Do you have a blueprint for resolving the conflict in Ukraine?

We always try to help those who are directly involved in the negotiating process. In the case of Ukraine, there’s a document signed by everyone. Our advice is to do whatever it takes to implement it and do so as soon as possible. There is an agreement, a ceasefire is in place, albeit a fragile one, and this must be put to good use, otherwise the situation will get out of control.

What do you think about Kiev’s idea to bring UN peacekeepers to Donbass?

The governments of the countries participating in the peace talks should discuss this issue. If they agree, they will need to clarify the mandate of the mission and its members. All of that must be agreed with the Ukrainian authorities. The Organization for Security and Co-operation in Europe, whose observers are already in Ukraine, must be involved in these talks. The involvement of neutral peacekeepers is not unusual in such situations. But I'm not familiar enough with the situation to say which is better − strengthening the OSCE mission, or bringing in peacekeepers.

But you are very familiar with the Syrian conflict. What’s your take on the Syrian talks, two rounds of which were held in Moscow?

It’s good that Moscow is facilitating the talks and managed to bring together the representatives of the parties to the conflict. This is a very positive step. But this is just one of the necessary steps. In addition to bringing the Syrians to the table, it’s imperative to bring regional players, such as Saudi Arabia, Iran, Turkey, Qatar and possibly Egypt, to the table as well. The talks must also be attended by the permanent members of the UN Security Council.

Speaking of the Security Council, its critics argue that it’s becoming less effective as its members can’t agree on anything. Is it time for a radical change?

There is need for reform. When I was Secretary-General, I tried to start the process, but I wasn’t able to. The need for change has only become stronger since. Today, the structure of the Security Council (and this also applies to the International Monetary Fund and the World Bank) reflects the geopolitical realities of 1945. However, the world has changed; there are many new influential players – from India and Indonesia to Brazil, Nigeria and South Africa. They want a seat at the table [in the UN Security Council]. If the Council doesn’t become a more democratic and representative place, governments will start questioning its decisions.

This is already happening.

Yes. The same thing is happening with the International Monetary Fund and the World Bank. The BRICS countries, for example, are already creating their own Development Bank.

How much time is left to reform the UN Security Council?

What do you think about France’s demand to restrict the veto to the five permanent members of the UN Security Council?

I don’t think that the veto can be abolished altogether. I’m also against granting it to more countries. When I talk about expanding the number of the Council members, I mean creating additional permanent seats in the Security Council (but without a veto) or quasi permanent seats that countries would occupy for much longer than the current two years. It should be about eight to 10 years. However, I understand where the idea to limit the veto comes from: there were several tragic situations where the Security Council members couldn’t agree among themselves – on Syria, for example. However, there’s a feeling that the permanent members of the UN Security Council get away with using their veto too easily. When they use their veto in a critical situation, they should at least explain their position, or better yet − come up with an alternative solution to the problem. You can’t just paralyse the work of the Council without offering an alternative way to resolve a crisis.

Former UN Secretary-General, Nobel Peace Laureate and Chair of The Elders (2013-2018); put development, human rights, the rule of law, good governance and peace at the top of the United Nations agenda.

Fit for purpose in the 21st century
The Elders announce four proposals to build a better and fairer UN system, 70 years after the organisation was founded.