Women’s Rights in Pakistan: failed by a culture of intolerance and impunity 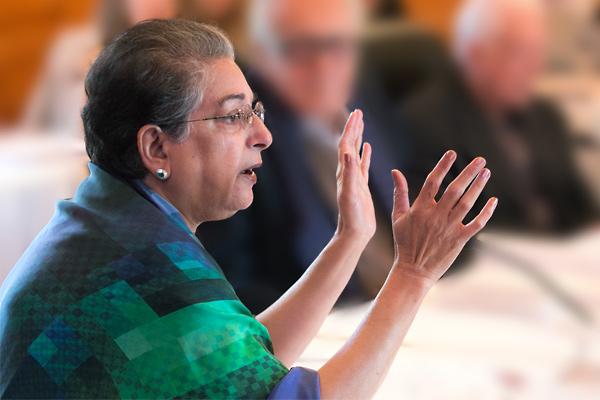 Following the recent publication of the International Crisis Group report Women, Violence and Conflict in Pakistan, Hina Jilani gives her legal and human rights perspective on its findings and on Pakistani women’s ongoing fight for gender equality.

Violence against women is endemic in Pakistan according to a new report by International Crisis Group. The report notes that on 8 March 2015, International Women’s Day, Prime Minister Nawaz Sharif vowed his government would take all necessary legislative and administrative steps to protect and empower women. However, it also highlights that Pakistan currently has discriminatory legislation and a “dysfunctional legal system” which is by and large unwilling to enforce progressive gender legislation. In addition, ongoing conflicts between the army and militants in tribal areas are contributing to continued attacks on women and abuse of their human rights.

Hina Jilani, renowned Pakistani human rights lawyer and women’s rights campaigner, responds to the report and explains why she remains optimistic about the potential for legal process to achieve women’s protection and political empowerment:

“Women face substantial, systemic challenges in Pakistan. And most fundamental is the question of violence. One of the key problems is that there is a very fragmented legal framework for violence against women. Moreover, there are no proper mechanisms on the ground for proper enforcement. For instance, the burden of prosecution always remains on the shoulders of the victim. If this is a marginalised, disempowered woman, how much effort can she really give to that kind of litigation? A lot of cases end up getting withdrawn as the victim is simply too tired.

There has been some good legislation dating back to 1961 on family law but the state has always been very apologetic about that. We see this again and again in Pakistan: there is no serious commitment to implement the good laws that do exist because of the environment that has been created around the whole question of women’s rights.

This was created very deliberately in the 1980s by the military government of the time which was fighting the Russians in Afghanistan, using Islamic groups.

At the level of decision making and power, these religious groups have enjoyed a disproportionate influence ever since. Every time something comes up in terms of women’s rights, this lobby gets together and attacks and challenges new ideas or proposals.

The legislature is generally not opposed to legislating good laws but they feel frightened because of the prevailing political climate of intolerance and impunity.

Yet when laws have been seriously implemented, they have become instruments of social change. One example is the old law on “illicit relationships”, meaning between non-married men and women. This was introduced in the 1980s as part of the Islamisation process. It meant prisons were full of women who would often stay behind bars for three or four years without ever being convicted. For 25 years, the women’s movement fought against that law, and finally it was changed. The reform was incomplete but the effect it had was very profound in terms of cutting the number of women in prison.

We can also point to progress in the field of women’s political empowerment, which goes hand in hand with democratisation. Women have benefited from whatever progress there was in terms of democratisation of practices, policies and the culture of our institutions.

In the 2004 parliamentary elections it became compulsory for political parties to fill up seats on a proportional basis specifically for women. And in the 5 years of the parliament, women had a sense of responsibility; they felt they needed to show something for themselves. They did tremendous work in terms not just for women but also human rights. In fact, the Human Rights Commission report of 2012 found almost all human rights legislation was tabled by women, regardless of what political parties they belonged to.

This is a key point: women can and do secure progress for and by themselves despite all the obstacles in their path. Despite all the problems women have in this country, we’re still optimistic and we’ve come a long way in the past two and a half decades. This is due to the strong civil society and very influential women’s movement. Whatever we’ve been able to achieve has been because of this movement, not governments or the judiciary.

Women in Pakistan are demanding change and challenging their political, social and religious institutions. Women from all religions suffer from similar problems. Violence is universal and nothing has been done about it.

What can we do to change the gender equation?

On 6 March, to mark International Women’s Day, Graça Machel and Desmond Tutu hosted a Twitter Q&amp;A on gender inequality and women’s rights. You can see the twitter conversation at #askElders. Here is the full transcript of the event.

"Why is it so important to promote and safeguard gender equality? It is a matter of human rights. It is a matter of democracy. Also, it is pure common sense."
Marking 100 years of women's right to vote in Norway, former Prime Minister Gro Harlem Brundtla