Condemning decades of failure, The Elders call for immediate and concerted action to provide relief and protect rights of the people of the Democratic Republic of Congo.

"The people of the Democratic Republic of Congo have been consistently ill-served by their leaders for decades while the international community has failed to respond effectively to protect their rights." – Kofi Annan

The Elders called on all political actors in the Democratic Republic of Congo (DRC) and the wider international community to take urgent action to address the political and humanitarian crises in the conflict-riven country.

The DRC is facing one of the worst ever humanitarian crises, with 4.5 million Internally Displaced Persons, 13 million people in need of humanitarian assistance and 9.9 million severely food-insecure, including 2 million children at risk of acute malnutrition. The United Nations classified the DRC as a Level 3 Emergency comparable to Yemen, Syria and Iraq.

The Elders also expressed their grave concern at the severe violence and human rights abuses across the country and the growing political instability sparked by the refusal of President Joseph Kabila to abide by the two-term limit as set out in the constitution.

They urged regional and international powers to redouble their efforts to encourage a peaceful transition. The recently-announced electoral calendar should be respected as it provides an opening for reinvigorated international engagement based on the "Saint-Sylvester" accord reached on 31 December 2016.

The Elders also deplored the failure of the international community to adequately fund humanitarian relief efforts, noting that although the UN's Office for the Coordination of Humanitarian Affairs (OCHA) launched its biggest-ever funding appeal of $1.68 billion for 2018, only 2 percent has been received so far.

Violence is endemic across the country and the recent upsurge in the Kasai region is of particular concern, with credible reports of a deliberate strategy of terror and destruction by government forces and their auxiliaries against the civilian population. The situation in North and South Kivu and Ituri is much worse than last year, and the capital Kinshasa has also seen growing revolt against the authorities.

"The people of the Democratic Republic of Congo have been consistently ill-served by their leaders for decades while the international community has failed to respond effectively to protect their rights. As President Kabila's legitimacy declines, flashpoints of insecurity have proliferated and the country risks becoming a failed state. The repercussions of this breakdown will be felt across the region and beyond. Urgent action to secure free and fair elections is a crucial first step to restoring political stability."

"The humanitarian crisis in the Democratic Republic of Congo is intolerable to anyone who believes in human rights and dignity, and the response is woefully inadequate. This failure of political will from national politicians and donors alike should shame us all into demanding concerted action to provide relief and protect rights."

The Elders call on Saudi Arabia and its coalition partners to lift the land, sea, and air blockade of Yemen to avert an escalation of the humanitarian disaster in the war-stricken country. 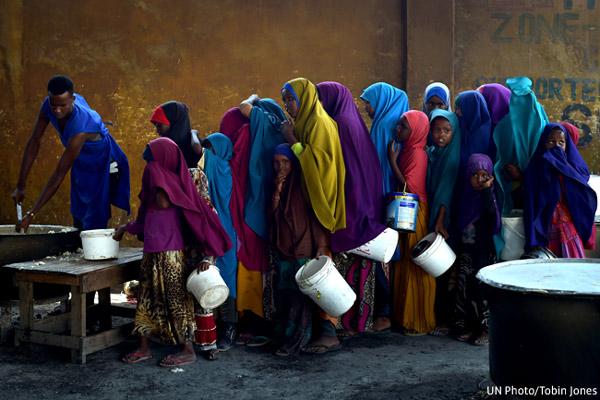 Condemning the famines threatening South Sudan, Nigeria, Somalia and Yemen as a damning symptom of political failure, The Elders call on the international community to commit substantial resources to the humanitarian relief efforts.