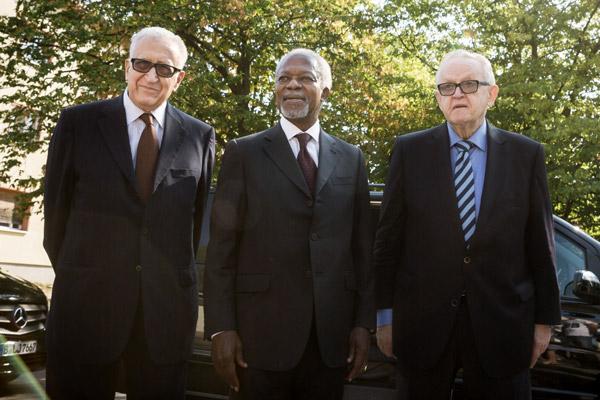 Our CEO Andrew Whitley reflects on a busy month during which The Elders launched a new report in Germany on refugees and mass migration, and held several meetings and discussions in and around the UN General Assembly in New York, including with senior UN officials on Syria and with resettled refugees at the International Rescue Committee.

“Ethical leadership” lies at the very heart of The Elders’ DNA. When our organisation was founded by Nelson Mandela in 2007, he charged the initial members with the following mandate:

“Using their collective experience, their moral courage and their ability to rise above the parochial concerns of nation, race and creed, they can help make our planet a more peaceful, healthy and equitable place to live.”

The past month has seen several key instances of Elders acting in the spirit of Madiba’s words, promoting ethical leadership, compassion and justice to a global audience. 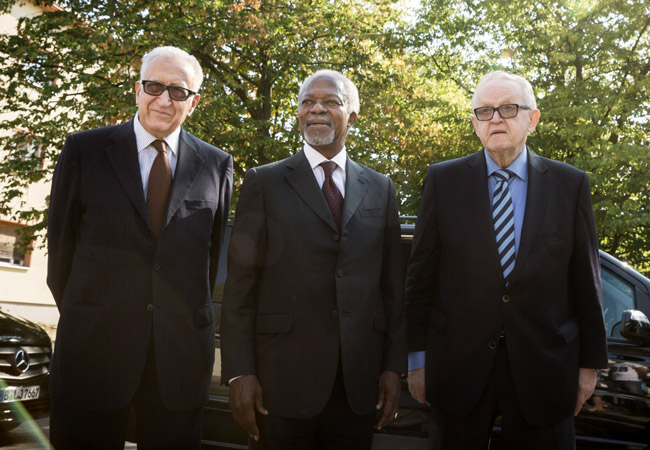 At the beginning of the month, we launched our new report on refugees and migration in Germany: the country most recently on the frontlines of the Syrian refugee crisis. Kofi Annan, Lakhdar Brahimi and Martti Ahtisaari all travelled to Berlin for the occasion, marking the first official visit to the country by The Elders.

The visit included insightful meetings with Foreign Minister Frank-Walter Steinmeier and Federal President Joachim Gauck; a recurrent underlying theme in the talks was the positive role that Germany can – and should – be playing in today’s troubled world. Additionally we met business leaders brought together by Richard Branson and the “B Team” network, to focus on innovative ways the private sector can help refugees empower themselves, and how this can benefit the wider community.

Just as importantly, the Elders also visited a refugee resettlement centre in Berlin and heard from refugees themselves about their experiences in Germany, why they left their homes in the first place, and what their hopes and fears are regarding the future.

As Kofi Annan said at the conclusion of the visit:

“These are complex, long-term issues that require far-sighted, compassionate leadership. The answer can never be to erect walls, or to claim that militarised borders or detention of migrants will stem the flow of desperate people.

We have been heartened by our meetings with [….] volunteers from all sections of German society who have made such selfless efforts to help people in need.”

Martti Ahtisaari, Mary Robinson and Hina Jilani all spoke at the UN summit on refugees and migrants on 19 September, focusing on addressing refugees’ vulnerabilities and the drivers of migration as well as upholding respect for international law. All Elders underlined that warm words in conference halls were not enough – the leaders gathered in New York had to show they were serious about backing up their statements with concrete, positive actions.

As in Germany, the Elders wanted to hear from refugees directly. At the headquarters of the International Rescue Committee they spoke to refugees from Iraq, Bhutan and Guatemala who had been resettled in the United States.

In their discussions, which were joined by IRC President David Miliband and former US Secretary of State Madeleine Albright – herself a former refugee – the Elders were struck by the refugees’ resilience and ambition to make a contribution to their new home.

The Elders also held talks with senior UN officials in New York about the worsening situation in Syria, and again urged the United States and Russia to continue to work together to stop the killing and place the Syrian people as their top priority. These private talks came amidst the dreadful news that a UN humanitarian aid convoy had been attacked from the air, killing many relief workers. We immediately issued a statement denouncing the action.

Amid such awful news, it was heartening that the month ended on a positive note with two Elders, Kofi Annan and Ernesto Zedillo, being invited by Colombian President Santos to the peace ceremony in Cartagena that formally brought to an end one of the world’s longest-running civil conflicts.

The Elders welcome this painstakingly-negotiated deal as a real example of ethical leadership from both President Santos and Timochenko, the leader of the FARC guerrilla movement. When such previously implacable foes can come together and work for peace and reconciliation, the rest of the world can surely take hope. We fervently hope the Colombian people themselves will support the peace accord in the referendum that will take place next Sunday, 2 October.

The Elders condemn bombing of aid convoy in Syria and urge all sides to adhere to ceasefire agreement.