“Any society that does not succeed in tapping into the energy and creativity of its youth will be left behind.” In a blog for Skoll World Forum to mark this year's International Youth Day, Kofi Annan calls for young people to be given the space to lead.

Wherever I go, from Accra to New York to Bangkok, I am struck by how often a young person will ask me: “How can I be a good global citizen?” This is hardly the question of a disinterested, insular group, yet it is said that this generation lacks the drive, the passion and the “get-up-and-go” attitude of previous generations. They are less likely to participate in the political process, less likely to vote than the older population and we often hear them described as apathetic and disengaged.

This view of young people is not one that I share.

The desire to participate is a defining characteristic of the young people I encounter. While the downward trend of youth turnout in elections is indeed worrying, we should not confuse apathy about the political process with a lack of passion about the issues and challenges facing the world. It is clear that the sense of disillusionment that many young people feel for our political institutions reflects the fact that they have been sidelined by them. If young people do not think that they can make a difference through these institutions and processes, should we really be surprised at their ambivalence towards them?

The best educated, most connected and most informed generation

Since we came together in 2007, my fellow Elders and I have made listening and speaking with young people one of the pillars of our work. We have held discussions with many groups of young people, from African students in Johannesburg in the run-up to the World Cup in 2010 to climate change activists during last year’s UN Conference on Sustainable Development (Rio+20). We’ve learned that not only do young people want to be engaged, but they also want to be engaged with.

Young people – with their dynamism, their energy and their inherent understanding of our interconnected world – have much to teach us. Increased educational attainment, advances in technology and the spread of information have made this generation the best educated, most connected and most informed in history.

It was with this in mind that I began the ‘Kofi Annan Dialogues’, a series of online conversations with young people. Hailing from every part of the world, these young advocates, activists and social entrepreneurs are already driving change in their communities. Committed to finding solutions to some of our most enduring challenges, they show just how much young people have to offer if given the opportunity to step up and take on leadership roles. Speaking with this group, I am convinced more than ever that any society that does not succeed in tapping into the energy and creativity of its youth will be left behind.

Considered too small to matter

We have not always served our young people well. As the tempestuous start of this century has shown, our political leaders and institutions have failed to keep up with the rapid changes to our world. Our inability to tackle some of the most pressing global challenges, from environmental degradation to rising inequality, has undermined public confidence and trust in our institutions.

The global economic crisis over the past few years has furthered this disillusionment, particularly among the younger members of our societies. The grievances of young people are understandable. They have been the least responsible for the economic downturn, yet have paid the heaviest price in terms of lost jobs and dashed prospects. Globally, young people are almost three times more likely to be unemployed than the adult population. In fact, despite the recovery experienced by many countries hit by the economic crisis, the global youth unemployment rate has risen slightly over the past year, and is expected to increase still further by 2018.

It is therefore unsurprising that young people have been at the forefront of the world’s mass protests in recent years. They are rightly angry that while others – in particular the old political and financial institutions – were deemed too important or too big to fail, they are considered too small to matter.

When it comes to formulating innovative ideas and galvanising action, it is clear that we older generations have much to learn from young people. They are not apathetic or disengaged; they are simply savvy enough to know that we are not listening to them. We must not only address the dispiriting abyss of youth unemployment, but ensure that young people drive the discussions that shape their lives.

From creating start-ups to igniting revolutions, young people have been toppling the old structures and processes that govern our world. Just imagine what solutions might be found if young people are given the space and encouragement to participate and lead.

In Dublin this week for their twice-yearly meeting, the Elders are taking the opportunity to hear from young leaders about their work promoting peace, human rights and inclusion in Northern Ireland.

"There is no sustainable future without the participation of our generation."Nigerian activist Esther Agbarakwe calls on governments to involve young people in debating the new global development goals agenda. 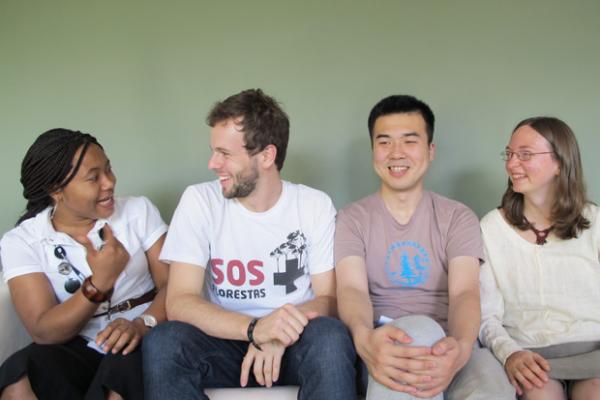 “You have not told us to 'calm down', that we don't need to be radical; you have instead told us that we have the power to make change happen – and that is what we need to hear!”&nbsp;Sara Svensson
In June 2012, following eight weeks of online deba