My name is not Greta Thunberg: Why diverse voices matter in the climate movement 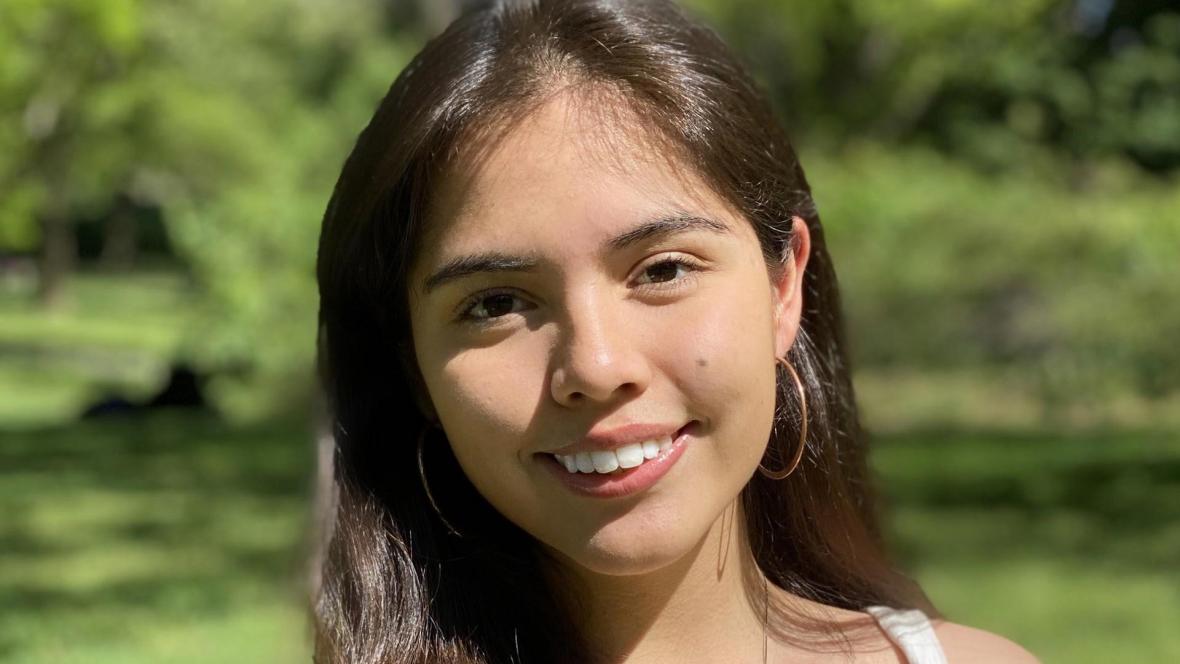 Xiye Bastida, an 18-year-old Mexican-Indigenous climate justice activist based in New York City, pushes back on click-bait and lazy journalism around coverage of the climate movement. She urges recognition of the rainbow of diverse voices acting to bring about an equitable, sustainable and just future.

This blog is the twelfth in our intergenerational series "It will take all of us: never too young to lead on the climate crisis" and features an introduction by Mary Robinson:

Xiye’s powerful blog highlights the critical issues of representation and inclusion in the global climate movement. As she rightly says, it is in our diversity that there is strength. We must listen to those living in the developing world, to people of colour, to indigenous communities, and to other marginalised minorities. They all have experience and wisdom essential to a holistic, rights-based response to the climate crisis.

In solidarity with one another we can create a safer, healthier, fairer world for us all. The Elders salute Xiye’s spirit, and that of all young people fighting for justice.

My name is Xiye Bastida, I am an 18 year old Mexican-Indigenous climate activist based in New York City. Over the past year I have helped organise three global climate strikes in the city that brought up to 300,000 people to the streets. I did this on behalf of the Fridays For Future movement, which was first started by Greta Thunberg, and aims to get civil society to demand climate justice. 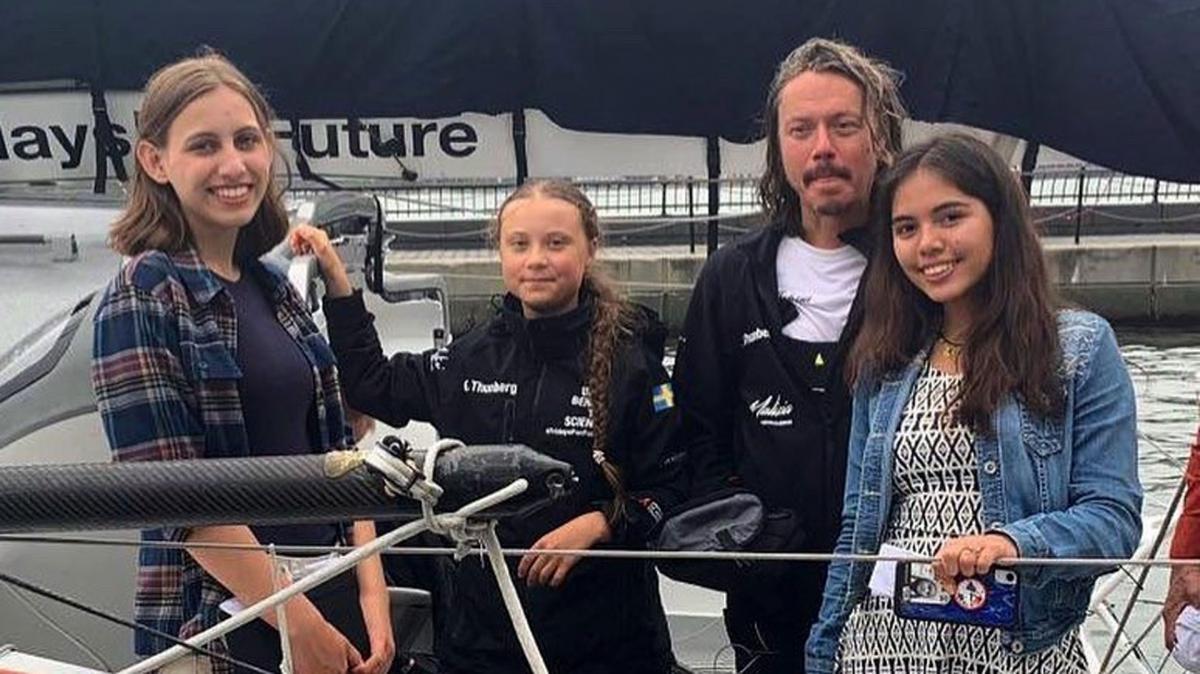 I have met Greta several times, such as when I welcomed her to New York City after she crossed the Atlantic on a sailboat; when we were part of an event called ‘Imagine the Future’, and when we went to visit the former President of the United Nations General Assembly along with fellow climate activist Alexandria Villaseñor. Greta is an amazing, pure-hearted individual who, just like me, wants you to listen to the science, and address the impending climate crisis. But just because we have the same mission, it doesn’t mean that we have the same struggles, inspirations, criticisms or stories.

Greta is a 17-year old climate activist who has Asperger’s syndrome, which means she is on the autism spectrum. When she found out about the climate crisis, she became ill and depressed. Her method of dealing with the world’s inaction was to act, because acting gave her hope. When she started striking, became vegan and stopped flying on planes, she started feeling better and soon became a global voice for climate action. However, with a great platform comes great criticism. Greta has received scrutiny over all of her decisions, and has been criticised by so many in positions of power, including the current President of the United States. She has needed to stay very strong and keep the eyes of the world away from her, reminding that what matters is the movement as a whole. 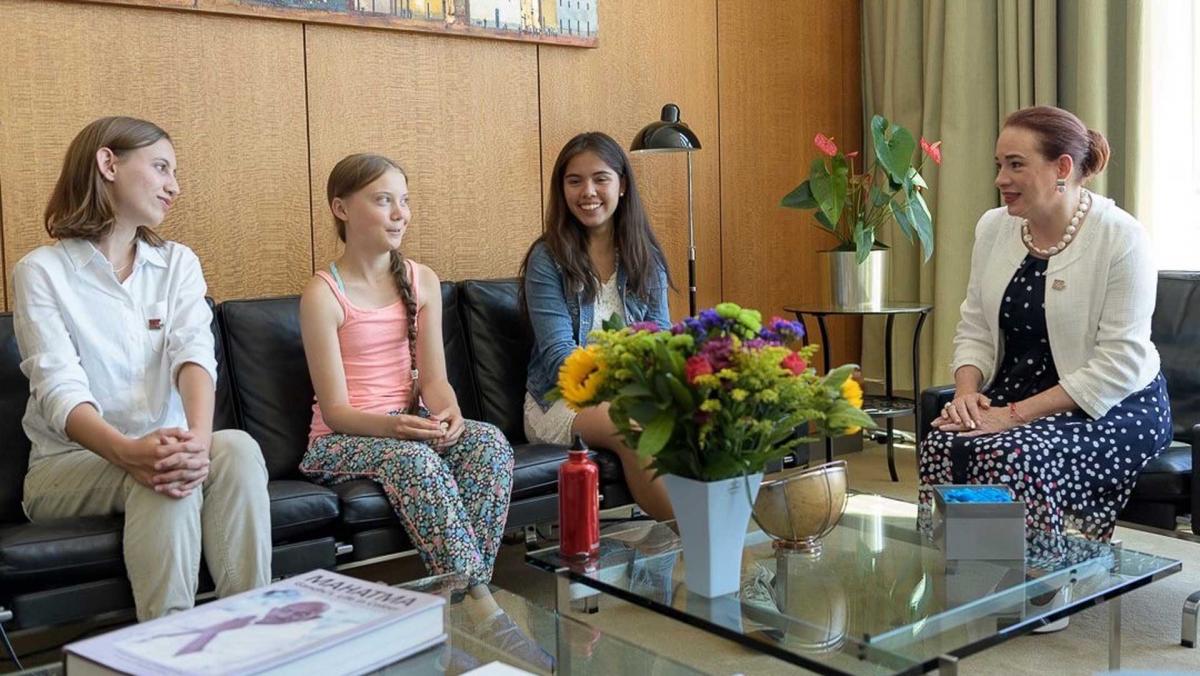 I cannot possibly compare my struggles to hers-- I don’t have Asperger’s, I didn’t become ill for an extended period of time due to climate grief, and I don’t face the same magnitude of scrutiny and criticism (which is a lot to deal with emotionally). Calling youth activists the ‘Greta Thunberg’ of their country diminishes Greta’s personal experience and individual struggles. On the other hand, since, as she keeps saying, what matters is the movement as a whole, singling out climate activists tends to invisiblise the diversity of stories of those who are living in conditions of poverty and pollution now exacerbated by the climate crisis.

I was born and raised in a small town in Mexico and lived there until I was 13 years old. I grew up as part of the Otomi indigenous community, which has traditionally communicated the importance of respecting and living in harmony with Mother Earth. In August of 2015, my home town suffered heavy flooding. The rainwater got mixed with the highly contaminated waters of the Lerma River, our dear Dathe (Father River) that has been forced to act as a toxic waste dump since the 1950’s in benefit of factories from Europe and the US. The flooding represented a health and economic hazard for my community, and was probably the first of many, as the IPCC [1] predicts that flooding will become more frequent due to climate change. A few days later, my family and I were scheduled to move to New York City to work on issues of earth ethics in education and we have been living here for four and a half years as of May, 2020. 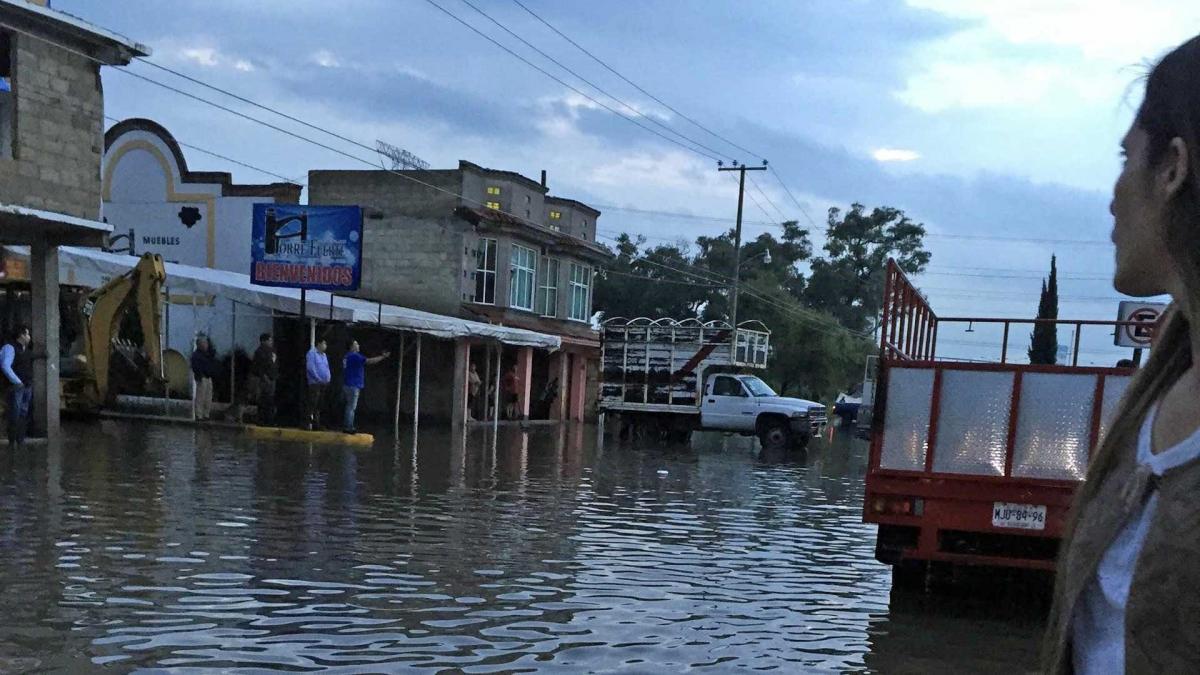 It was in New York where I learned about concepts of environmental racism, greenwashing, and green gentrification. I came to understand that we, as frontline communities of colour, are the most exposed to environmental degradation from the exploitation of minerals, fossil fuels or underground waters, and the disposal of waste generated by cities and industrial corridors. Our grounds, water and air are being consistently used as sinks for thousands of tons of organic and inorganic pollutants. That is why sooner or later our people get sick. In the Bronx 17% of adults have asthma because of poor air quality, compared to the national average of 7%. The Dakota Access Pipeline that gained international opposition has leaked at least five times since 2017, posing a great risk to indigenous communities. The waste of the United States, which is more than 254 million tons per year, is unusually sent to South East Asian countries contaminating the livelihoods of poor communities and intensifying health hazards. Locally and globally, communities of colour and indigenous communities like mine suffer the most from the disrespect towards our planet Earth.

When I found out that 100 companies are responsible for 71% of the total CO2 emissions, when I found out that we have 10 years to cut our emissions in half for a chance to stay below 1.5o of warming, and when I found out that my children might never get to visit a beach, I knew I had to do something. I started organizing, speaking, and writing about climate justice. I visited the sinking outliers of New Orleans, I read about the pending disappearance of the Marshall Islands, and I paid close attention to the stories of destruction of indigenous communities and their most diverse ecosystems for the sake of profit. Turns out that frontline communities have been speaking up against climate injustice for decades, and that Indigenous Peoples have been defending their territories, ecosystems and biodiversity for thousands of years. I am one of those people.

Calling me “the Greta Thunberg of the United States” distorts my experiences, my struggles, inspiration - my story. But most critically, it diminishes the years of resilience that activists of colour have endured.

I have been called “the Greta Thunberg of the United States” countless times. The first time, on a PBS article I was gladly surprised because it gave me a feeling of validation. It made me feel that I was doing something right. However, when an article by the HuffPost came out, depicting me as powerful and driven individual who is fighting for just representation of activists, I realised that calling me “America’s Greta Thunberg” was not designed to be empowering for me, but rather, it was a tactic designed to get more clicks on the article.

Even then, I didn’t speak up because I thought that the issue was incidental. I convinced myself that it was a one time thing, and that no other youth from a minority background would be compared to Greta. My hope was that all of us would stay away from reducing the movement to any one person.

Then I went to COP25 in December of 2019 with youth climate activists from over fifty countries. One of them asked, “Who here has been called the Greta Thunberg of their country?” Everyone raised their hands. My heart ached in that moment, as I realised that if you don’t speak up against the homogenization of the faces of movement, true representation wouldn’t be achieved. That same day I had an interview with an Italian reporter from La Repubblica. He asked me about my experience and my reflections on the ineffectiveness of COP. When the article came out, he called me la "Greta" di New York. 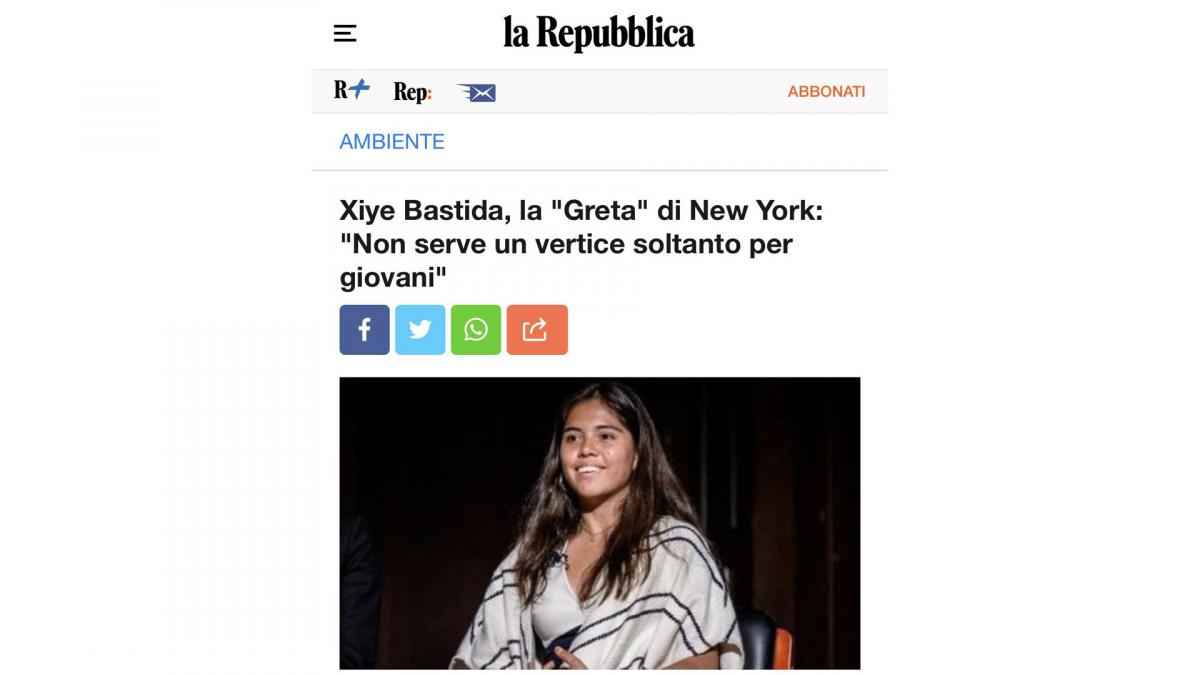 A few weeks after COP, fellow 8-year-old climate activist Licypriya Kangujam called out the media for calling her the Greta Thunberg of India in a tweet that went viral. That’s when I realised that it is up to us to bring these issues to light.

Vanessa Nakate, the Ugandan youth climate activist and founder of a pan-African youth climate organization called the Rise Up Movement, was cut out of an AP photograph during a press conference she participated in with four young, white climate activists in Davos during the World Economic Forum. Vanessa told a reporter that when media houses use terms like “The Greta of Uganda,” she tweets back: 'Do you know their names?'" 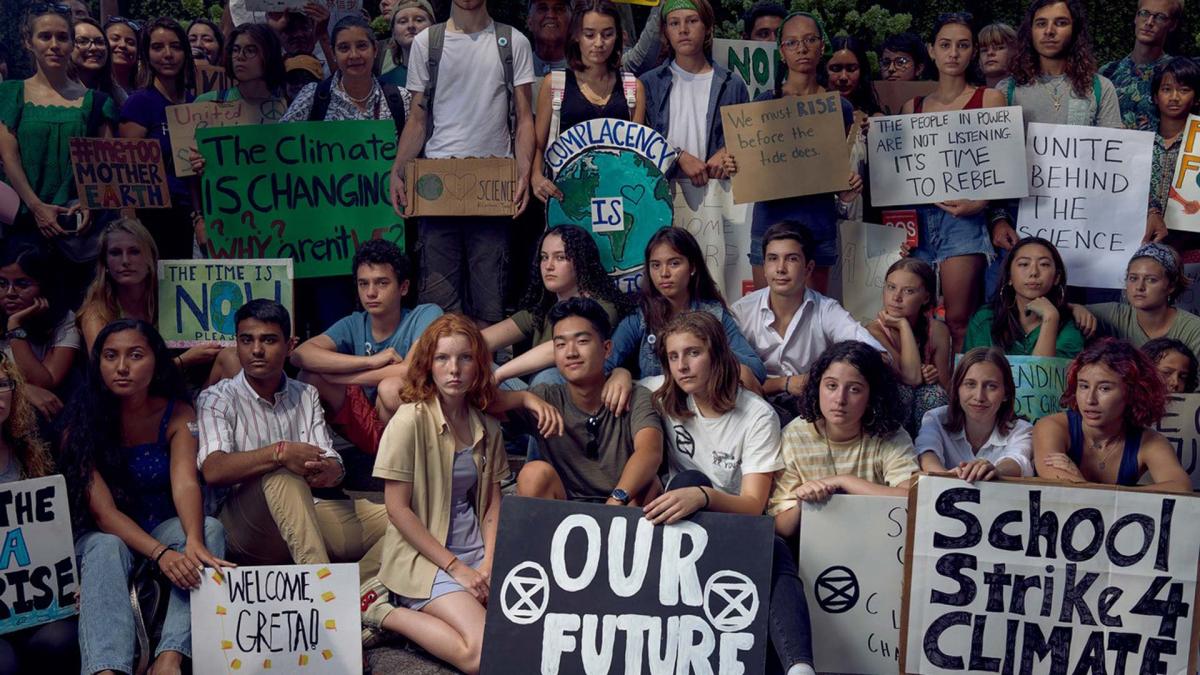 We need to recognise each other to bring dignity forward. The fight for climate justice must be done with holistic solutions in mind. Solutions that tackle the problem at the root in order to bring forward a just, equitable, connected, and proactive future. In our struggle for the unification process, so necessary for humanity to mature as a whole, all of us need to be conscious about our power of agency to bring about the future that we want to see.

On 15 March students from around the world will join a global Youth Strike for Climate to demand that their leaders urgently take climate action. Extinction Rebellion Activist Farhana Yamin and #YouthStrike4Climate organiser Jake Woodier explain why.
Photos