Returning a normal life to Gazans

At the press conference concluding The Elders' trip to Israel and Palestine, Gro Harlem Brundtland delivers a statement urging a complete paradigm shift on Gaza and explains how the two-state solution would benefit both countries.

“The people of both countries want and deserve a just peace.” 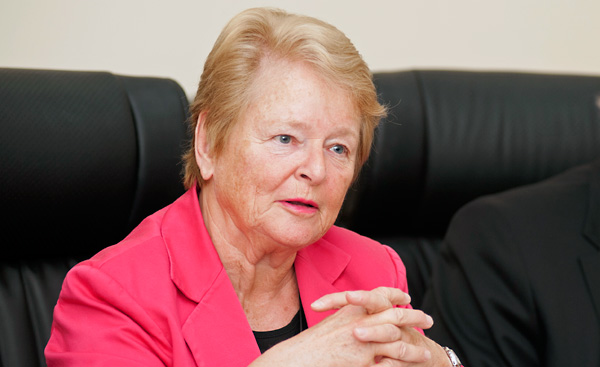 We came here to visit Gaza, the West Bank and Israel. As you know, we were unable to go to Gaza. We deeply regret not having had the opportunity, on this occasion, to see the situation there at first hand.

However, over the past three days we have received comprehensive briefings from many independent experts, including Israelis and Palestinians and the UNRWA Commissioner-General, which unfortunately have confirmed our worst expectations.

The situation in Gaza is unsustainable and intolerable. A complete paradigm shift is essential. This shift demands the lifting of the siege. It also requires an end to Israel’s policy of separating the West Bank and Gaza.

It demands freedom of access for goods, not least the large amounts of reconstruction material that are so badly needed.

It demands freedom for Gaza to export – to the West Bank, Israel and the rest of the world – so that its economy can be revitalised.

It demands freedom of movement for people, so that families can be united, students can study in the West Bank or abroad, and patients can receive the medical care they need.

In short, all the aspects of normal life that people in our own two countries, and in Israel, take for granted.

Without this paradigm shift, which most of the world recognises as vital, we fear that further conflict is inevitable. This is what many Israelis and Palestinians we have met have consistently told us.

One key to avoiding another war and to improving conditions in Gaza is genuine reconciliation between Fatah and Hamas.

Another is the full establishment in Gaza of the Palestinian Government of National Consensus, initially to control the border crossings and thus to allow many more goods to enter the territory, for reconstruction and other essential purposes. Then, the full authority of a single government over all the territory, which we hope will one day comprise the independent State of Palestine, must be restored.

In our discussion on these matters with President Abbas today, he committed to convene the Interim Leadership Framework, including the Executive Committee of the PLO and representatives of Hamas and Islamic Jihad. This should provide a sorely-needed forum for inclusive decision making between PLO and non-PLO factions. The Elders believe this would be a significant step forward.

President Abbas also asked The Elders to secure from Hamas a written request for the convening of elections. He committed to hold Presidential and PLC elections upon receipt of this communication.

But our mission here has not only been about Palestine. We were encouraged by the imaginative ideas put to us by several proudly patriotic Israelis for the realisation of the two-state solution. Their voices deserve to be heard more clearly in Israel and abroad.

We were also invited to visit a kibbutz right on the border with Gaza. We were moved by their experiences of war, and even more by their passionate desire to live once more in peace with their Palestinian neighbours.

The end of occupation and settlement expansion that a two-state outcome implies is, in our view, the best guarantee of Israel’s future security and acceptance by its neighbours.

To help achieve this goal, we feel it is high time that the countries of Europe take a more proactive role, underpinned by a serious financial commitment to assist in Gaza’s reconstruction. The Elders will do all we can to support EU High Representative Federica Mogherini on this matter.

The continuing conflict between Israel and Palestine has been a priority for The Elders, since the organisation was founded by Nelson Mandela in 2007. Not long before he died, he said he believed that ‘in the end, it is kindness and generous accommodation that are the catalyst for real change’.

In the course of our visit here, we have indeed seen much kindness and readiness to accommodate from the Palestinians and Israelis we have met. The people of both countries want and deserve a just peace. It is time for their leaders to put aside narrow agendas and divisive rhetoric, and listen to them.

Why The Elders are returning to Israel and Palestine

Jimmy Carter and Gro Harlem Brundtland will revisit the Middle East in a renewed push to promote the two-state solution and to address the root causes of the conflict.