Why The Elders are returning to Israel and Palestine

Jimmy Carter and Gro Harlem Brundtland will revisit the Middle East in a renewed push to promote the two-state solution and to address the root causes of the conflict.

The conflict between Israel and Palestine has been high on The Elders’ agenda since 2007, the year that Nelson Mandela launched the group. They continue to believe that it can be resolved with the necessary political will and international support, and hope that they can act as a catalyst in improving the prospects for peace between Palestinians and Israelis.

Two Elders will be on this trip, from 30 April to 2 May. President Carter has always been a passionate supporter of a just peace between Israel and Palestine. Dr Gro Harlem Brundtland was Prime Minister of Norway at the time of the Oslo Accords in the mid-1990s and has maintained her close interest in the faltering peace process. 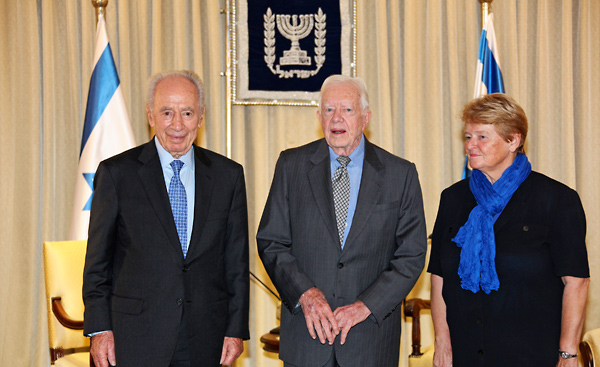 Since their last visit, in October 2012, The Elders have watched with dismay the intensification of animosity and misunderstanding between the two parties. In particular, they believe that the steadily deteriorating situation in Gaza must be reversed: the enclave has been under siege for eight years, and in 2014 suffered the third of three devastating wars since 2008/09. Reconstruction is painfully slow. 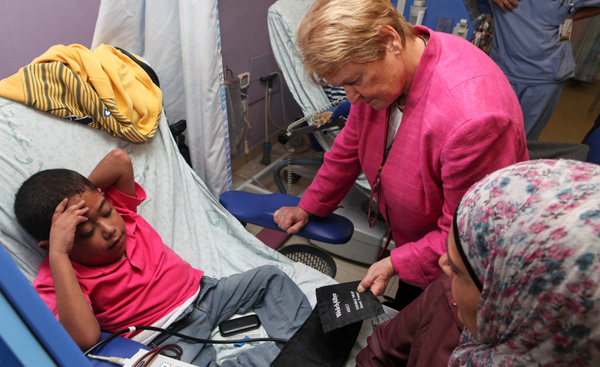 Gro Harlem Brundtland at a hospital in East Jerusalem which also treats patients from Gaza and the West Bank, October 2012

Thus, on their three-day visit, they will be pressing the case for a complete paradigm shift on Gaza that addresses the root causes of the recurring conflict there.

Such a shift would require the lifting of the blockade by Israel and Egypt while addressing the security concerns of both, and the reconnection of Gaza and the West Bank. The latter, in turn, requires the achievement of genuine reconciliation between the two main Palestinian factions, Fatah and Hamas. To that end, the Elders will be urging both to set aside their differences and put national Palestinian interests first.

They will also be urging swifter progress in establishing the presence of the Palestinian Government of National Consensus in the Gaza Strip, which will help to free up the blockages that are holding up donor funding and delivery of construction and other essential materials for the people of Gaza.

Finally, they will be exploring with Palestinians the prospects for a more inclusive government and society; and, with their Israeli interlocutors, in the aftermath of the 17 March Knesset elections, the practical ideas that they have for advancing peace and the two-state solution.

Israel and Palestine: the path to peace

In the wake of Israel’s re-election of Benyamin Netanyahu in March, the Elders call for all players regional and international to re-examine the two-state solution and to redouble efforts to find a path to peace for Israel and Palestine.

'Rebuild Gaza, and avert the next war'

Writing in The Washington Post, Jimmy Carter argues that an end to Gaza's isolation is essential for a future Israel-Palestine peace deal.