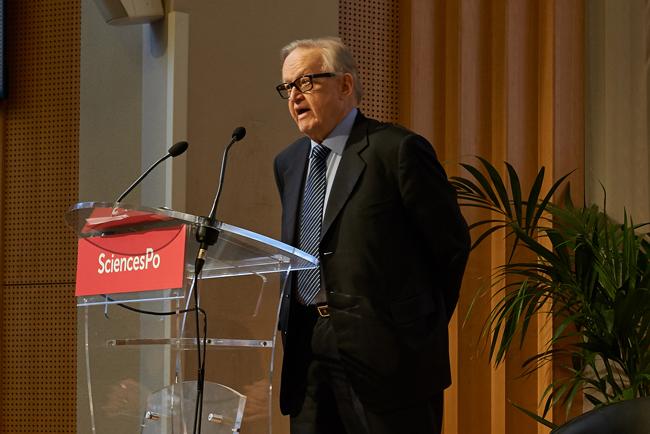 Martti Ahtisaari and Lakhdar Brahimi discussed The Elders’ proposals for strengthening the UN at the Sciences Po event which included contributions from several possible candidates for the next Secretary-General and touched on issues from terrorism to the refugee crisis, development challenges and the weakness of international institutions.

Bookended by notable interventions from current and historic French politicians, the Youth & Leaders Summit at Sciences Po on Monday 18 January was a forum for informed and stimulating debate from global experts on the agenda facing the next United Nations Secretary General. Martti Ahtisaari and Lakhdar Brahimi were invited as keynote speakers and panellists to outline The Elders’ proposals on strengthening the UN, and their interventions drew an enthusiastic and engaged response from their peers – former Prime and Foreign Ministers, senior diplomats and UN officials - and the Sciences Po students.

"For all its failings and challenges, the United Nations remains the 'beating heart' of the international system and a unique multilateral platform for debate and finding common solutions to global challenges."

The conference’s theme – “The agenda of the future United Nations Secretary-General” – had particular piquancy because two declared candidates were among the speakers: Irina Bokova, Director-General of UNESCO, and Vuk Jeremić, former President of the UN General Assembly and Foreign Minister of Serbia. Another speaker, former Australian Prime Minister Kevin Rudd, is also regarded as a credible runner, so the interventions of all three carried real weight and afforded attendees a possible glimpse into the actual next Secretary-General’s thinking.

The conference opened with a keynote speech from Emmanuel Macron, French Minister of Economy, Industry and Digital Affairs. Speaking without notes and in fluent English, Macron said European unity – both within the euro zone and the wider European Union – was a vital prerequisite for peace and security in the wider world. Europe should represent “hope, not nostalgia”, he said, adding that “there can be no strong UN without a strong and united EU.” 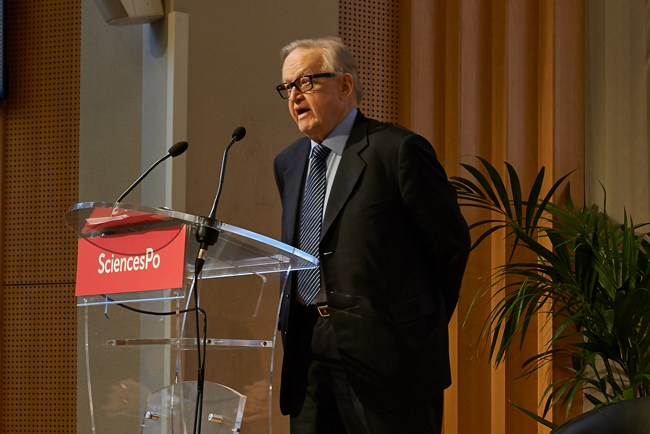 Martti Ahtisaari drew spontaneous applause from the audience for saying that, in his personal view, it was “high time” for a woman to be appointed to the post of Secretary-General.

Irina Bokova was the final keynote speaker, and she asserted that for all its failings and challenges, the United Nations remains the “beating heart” of the international system and a unique multilateral platform for debate and finding common solutions to global challenges.

These points were all elaborated upon and developed further in panel discussions on how to revive effective multilateralism, the UN’s role in the global refugee crisis, terrorism, development and UN institutional reform. Speakers in all panels highlighted the need for committed ethical leadership and welcomed The Elders’ proposals as an important contribution to the debate.

Pascal Lamy, former Director-General of the World Trade Organization, said globalisation had given rise to a “polylateral” system rather than the multilateral system of the UN, IMF and World Bank drawn up at the end of the Second World War. The recent COP21 climate summit in Paris showed how effective leadership could be a catalyser for actions from stakeholders from governments to business, and the next UN Secretary-General should perform a similar function, he said.

The scale of this challenge and the political complexities and sensitivities facing the next Secretary-General were highlighted by both Kevin Rudd, and former French Foreign Minister Hubert Védrine. Rudd said bluntly that he did not think the current UN system was fit for purpose and that “the demand for global governance is going through the roof, while the supply is going through the floor.”

Védrine cautioned participants at the conference and the wider audience not to consider the selection process of the next Secretary-General as a “lettre Père Noël” or wish list, but to be realistic about the political constraints that will both determine the choice, and the eventual candidate’s scope for action. This point was further emphasised by Jean-Marie Guéhenno, President of the International Crisis Group, who said that the Secretary-General could not be in constant conflict with the five permanent members of the UN Security Council, but neither could he or she afford to be seen as its poodle. His fellow panellists agreed that The Elders’ call for a more transparent selection procedure could enable the best possible candidate to be found. 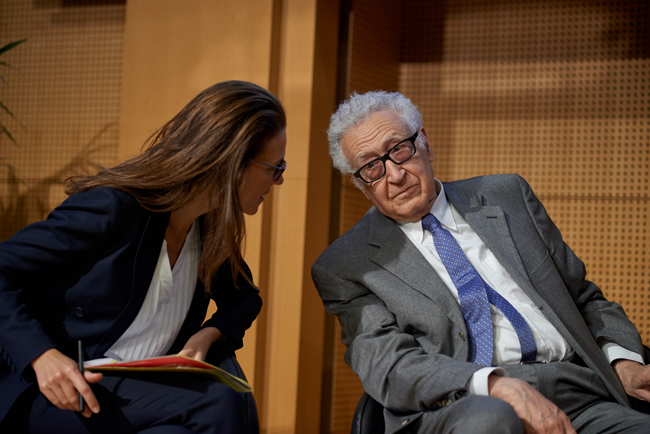 "The United Nations will remain an indispensable actor across all issues, and should serve to remind younger generations of the horrors of war that led to its creation back in 1945."

Terrorism was at the forefront of many people’s minds at the conference, and the Dean of the School of International Affairs, Enrico Letta, the former Italian Prime Minister, paid tribute to the resilience of the people of Paris after the November 13 suicide attacks in his opening remarks. It will undoubtedly feature on the next Secretary-General’s agenda, but Lakhdar Brahimi cautioned against taking an overly simplistic or reductivist view of the phenomenon. Terrorism needs a careful and contextualised definition to enable an effective response by the United Nations and other actors, he said, adding that he preferred to speak of “terrorist actions” rather than “terrorism” per se. Speaking on the same panel, former French Minister of European Affairs Élisabeth Guigou argued that the international community can still play an important role in tackling terrorism by addressing issues that feed extremism and disillusion such as the Israeli-Palestinian conflict.

The closing session on “Reforming the UN System: a matter of urgency or impossibility?” once again saw The Elders’ proposals take centre stage. Vuk Jeremić said the idea of expanding the membership of the Security Council was “very reasonable”, and former Secretary-General of the Arab League, Amre Moussa, said he agreed with The Elders that the next Secretary-General should just serve one term of up to seven years.

The conference closed with reflections by Valéry Giscard d’Estaing, the 90-year-old former President of France who was influential in establishing the G7 group of industrialised countries in the 1970s. He identified four global challenges which the next Secretary-General would have to confront: Syria, Russia’s actions in Crimea and Ukraine, climate change and population growth. He said the United Nations will remain an indispensable actor across all these issues, and should serve to remind younger generations of the horrors of war that led to its creation back in 1945. 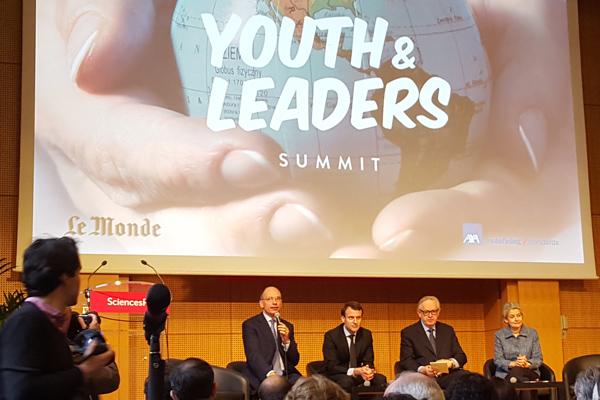 Almost one year on from launching our initiative to strengthen the United Nations, Martti Ahtisaari delivers a keynote address at the Sciences Po Youth &amp; Leaders Summit in Paris calling for leadership by governments and the next Secretary-General in m 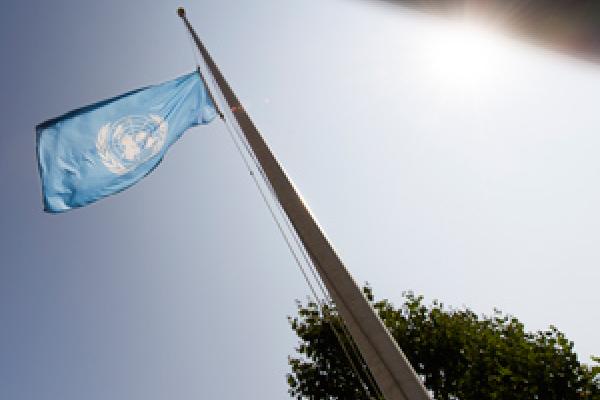