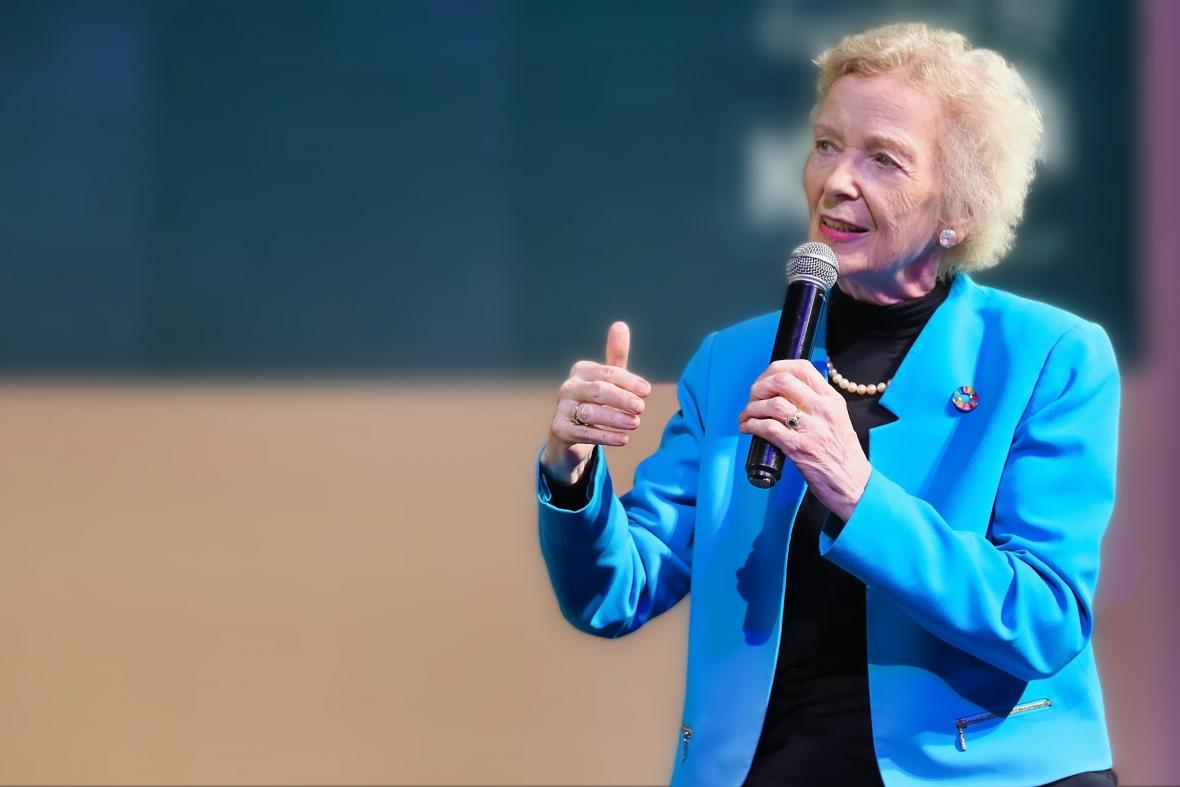 Mary Robinson at COP27, November 2022.
13 December 2022
Mary Robinson gave a virtual speech at the Green Sustainable Development Conference in China on the importance of climate action cooperation between China and the EU, and the need for more ambitious emissions reductions to address the climate crisis.

I am delighted to speak at this ‘Green Sustainable Development Conference’ to promote climate action and dialogue between China and the European Union.

I speak to you today in my capacity as Chair of The Elders. Founded by Nelson Mandela in 2007, The Elders are an independent group of global leaders working together for peace, justice and human rights.

I am sorry not to be there in person to witness the launch of the China-EU low-carbon pilot projects: from the carbon neutral demonstration park; to low-carbon cities; and green infrastructure, I warmly commend all businesses taking part.

Given the scale of the decarbonisation challenge I welcome cooperation at as many levels, and between as many stakeholders as possible. Stronger links between cities and companies in China and Europe should increase trust, transparency and an openness to external perspectives, all of which will in turn create stronger foundations for cooperation at the international level.

This cooperation is essential as the challenges we face cannot be addressed solely on a national basis. Climate change and biodiversity loss are dual existential threats to Europe, China, and the whole world: two sides of the same coin.

As we meet today, the Global Biodiversity Summit is happening under Chinese leadership. This Summit is a moment to agree a global deal for nature – equivalent to the Paris Climate Agreement - that brings the world together behind one mission: to halt the destruction of natural habitats and the loss of animal and plant species. We cannot tackle the climate crisis without restoring nature, and so I wish China every success in shepherding an ambitious agreement that includes a firm commitment to protecting 30% of the world’s ecosystems by 2030. I hope biodiversity COP15 will mark a new era in how the world understands and addresses the twin challenges of climate change and biodiversity loss.

We are already feeling the impacts of climate change at 1.2 degrees of warming. In 2022 we have had extreme weather conditions unseen in six decades in some Chinese provinces. We also experienced the worst drought in 500 years in Europe.

The decisions China makes this decade - as the world’s largest emitter - will determine our common safety. Without China successfully transitioning to a low-carbon economy, achieving our shared global climate goals will be impossible.

Likewise, for the European Green Deal to be successful, the EU will need to work with partners, including China, to build resilient supply chains and markets for low-carbon technologies, and develop standards to spur growth in sustainable products.

The current geopolitical scene is undoubtedly tense. Yet China and Europe’s ability to continue to cooperate in addressing global challenges has set a positive tone and has helped keep the space for the international cooperation open. This collaboration sets a strong example to the rest of the world, but there is still more to be done.

While it is heartening to see China and the EU pulling in the same direction with set net zero targets, now we need see more cooperation to accelerate the pace of action taken.

Both the EU and China are well positioned to meet their climate commitments and transition to a greener economy and this crucial moment provides ample opportunities for businesses to work together.

67% of European companies operating in China are already pursuing carbon neutrality - to the other 33%, please catch up!

Business needs clear signals from governments. Targets matter, but if they are to spur ambition and innovation they have to stretch the firms and leaders who have signed up to them. Modest targets are not enough.

That’s why I am pleased the EU is agreeing a more ambitious 2030 emissions reduction target. I hope China will too. Speaking frankly, peaking emissions by 2030 is too late. According to Climate Action Tracker, China’s current climate plan is consistent with a world where temperatures are 3 degrees Celsius higher than pre-industrial levels. An earlier peaking date is essential to align with the Paris goals, and with China’s 2060 net zero target. It is also crucial if China is to avoid the worst impacts of the climate crisis. China already experiences recurrent coastal flooding, costal erosion, and storm surges. According to a recent World Bank report, unabated climate change could result in estimated GDP losses for China of between 0.5 and 2.3 percent as early as 2030.

Given the dramatic pace at which China is rolling out renewable energy and electric vehicles the prospect of deeper reductions in emissions by 2025 appears ever more likely. But if China were to formally commit to reducing its emissions from this date, it would demonstrate clear commitment and leadership.

I am pleased that China is soon to unveil its methane reduction strategy, I hope there can be stronger EU-China collaboration in this area. I also look forward to seeing how China will address its commitment to start phasing down coal emissions in the second half of the 2020s: an announcement by China stating it would no longer allow new coal plants would send a powerful signal globally.

Provinces like Jiangsu, where this conference is being held today, are frontrunners in China’s decarbonisation and should be recognised for their contributions.

These pilot projects and low-carbon cities should also demonstrate that decarbonisation is good not only for hitting targets but for the real-world impacts on citizens everywhere. The benefits that come with climate action include more liveable cities, clean air, green jobs, and the return of nature. These are surely all things we want for ourselves and for our children.

Civil society in both China and Europe have contributed well to the culture, policy, and action for combating climate change and building resilience. Civil society and NGOs are important guardians of accountability, we should not underestimate the critical role they play in holding governments and businesses to account.

Shifting from the highly unsustainable lifestyles we have today will require deep cultural, economic, and behavioural change. Increasing cooperation across governments, businesses, and civil society is essential if we are to leverage change at the pace we need. I resolutely believe this change is possible though, as the founder of The Elders, Nelson Mandela famously said: change “it always seems impossible until it is done”.

Elders Statement: The agreement reached at COP27 in Egypt shows that solidarity and co-operation between nations on the world’s most pressing issues is possible through negotiation and compromise, even in testing times.

On Saturday 12 November Mary Robinson called for just transitions to be rooted in human rights at a COP27 roundtable discussion exploring the importance of Just Transitions and how to achieve them in practice around the world.
Photos