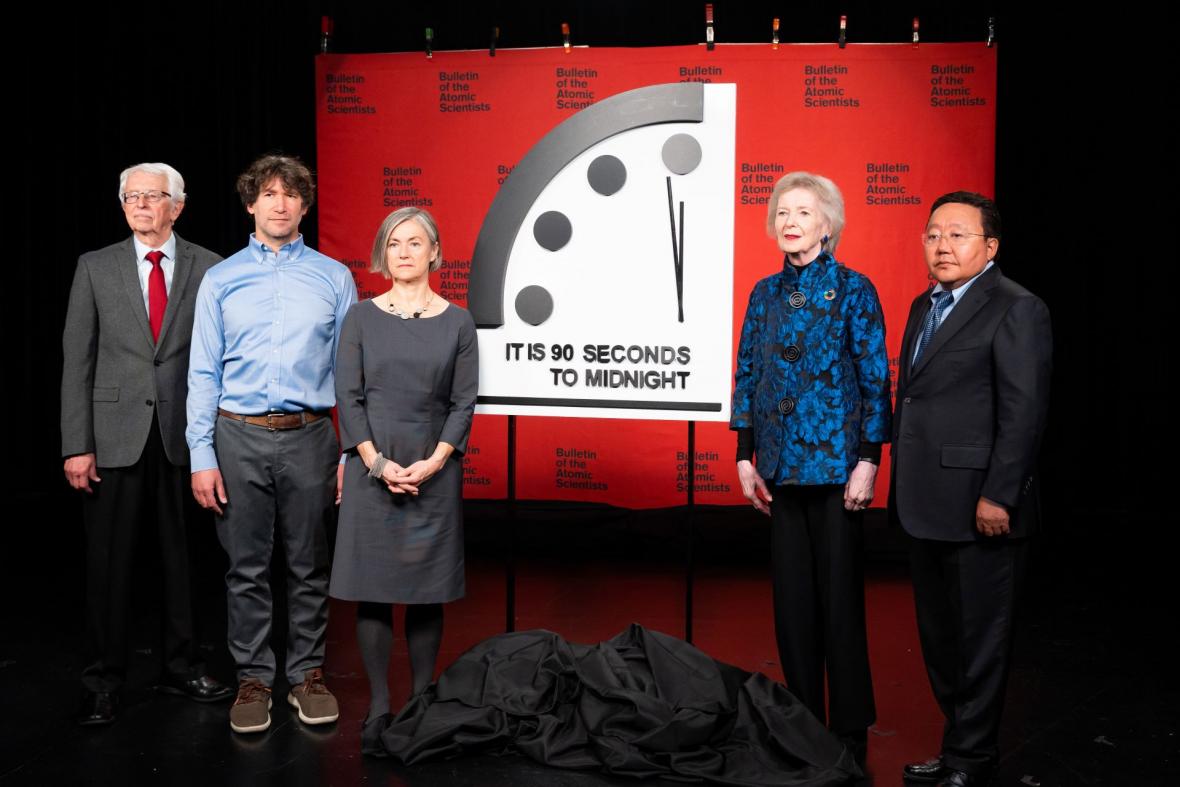 Mary Robinson and Elbegdorj Tsakhia join the Bulletin of the Atomic Scientists for the 2023 Doomsday Clock announcement. Photo: Bulletin of the Atomic Scientists
24 January 2023
Download PDF statement
Statement: The Elders warned today that only a crisis mindset from global political leaders can generate the urgent action needed to address the existential threats facing humanity, including the climate crisis, pandemics and nuclear weapons.

The warning came as former Presidents Mary Robinson and Elbegdorj Tsakhia joined members of the Bulletin of the Atomic Scientists for the unveiling of the Doomsday Clock, which today moved to 90 seconds to midnight – the closest it has been to catastrophe since its creation in 1947.

Russia’s illegal war on Ukraine and President Putin’s reckless nuclear rhetoric have worsened tensions and made nuclear conflict a more real threat than at any time since the height of the Cold War, The Elders warned.

But while Russia alone bears responsibility for its war on Ukraine, for which its leaders must ultimately face justice under international law, all states bear responsibility for the broader failures of governance and leadership that have undermined the multilateral system.

Their failure to take collective action has hampered effective responses to the climate crisis and COVID-19, as well as conflict prevention and resolution efforts from Syria and Yemen to Myanmar and the Sahel.

The Elders underscored that the world faces interlocking crises, each illustrating the unwillingness of leaders to act in the long-term interests of their people, and that dialogue in good faith and multilateral cooperation are indispensable to finding sustainable solutions that meet the needs of all the peoples of the world.

“The Doomsday Clock is sounding an alarm for the whole of humanity. We are on the brink of a precipice. But our leaders are not acting at sufficient speed or scale to secure a peaceful and liveable planet. From cutting carbon emissions to strengthening arms control treaties and investing in pandemic preparedness, we know what needs to be done. The science is clear, but the political will is lacking. This must change in 2023 if we are to avert catastrophe. We are facing multiple, existential crises. Leaders need a crisis mindset.”

“Three years ago, I helped unveil the Doomsday Clock when its hands were last moved. Today they are even closer to midnight, showing how much more perilous our world has become in the wake of the COVID-19 pandemic, extreme weather events and Russia’s outrageous war on Ukraine. Leaders did not heed the Doomsday Clock’s warnings in 2020. We all continue to pay the price. In 2023 it is vital for all our sakes that they act.”

Elbegdorj Tsakhia, former President of Mongolia and member of The Elders, added:

“As a former President of a country landlocked between two large powers, I know how important international diplomacy is when it comes to tackling existential threats. Today our world faces multiple crises. A common thread runs through them all: failure of leadership. We need a collective response rooted in the spirit and values of the UN Charter that can put us back on a pathway to peaceful co-existence and sustainable development.”

Former President and Prime Minister of Mongolia who led his country’s transition to democracy after the fall of the Soviet Union. An international campaigner on nuclear disarmament and non-proliferation, climate change and democracy.