"Climate finance must be distributed in a gender-responsive way" 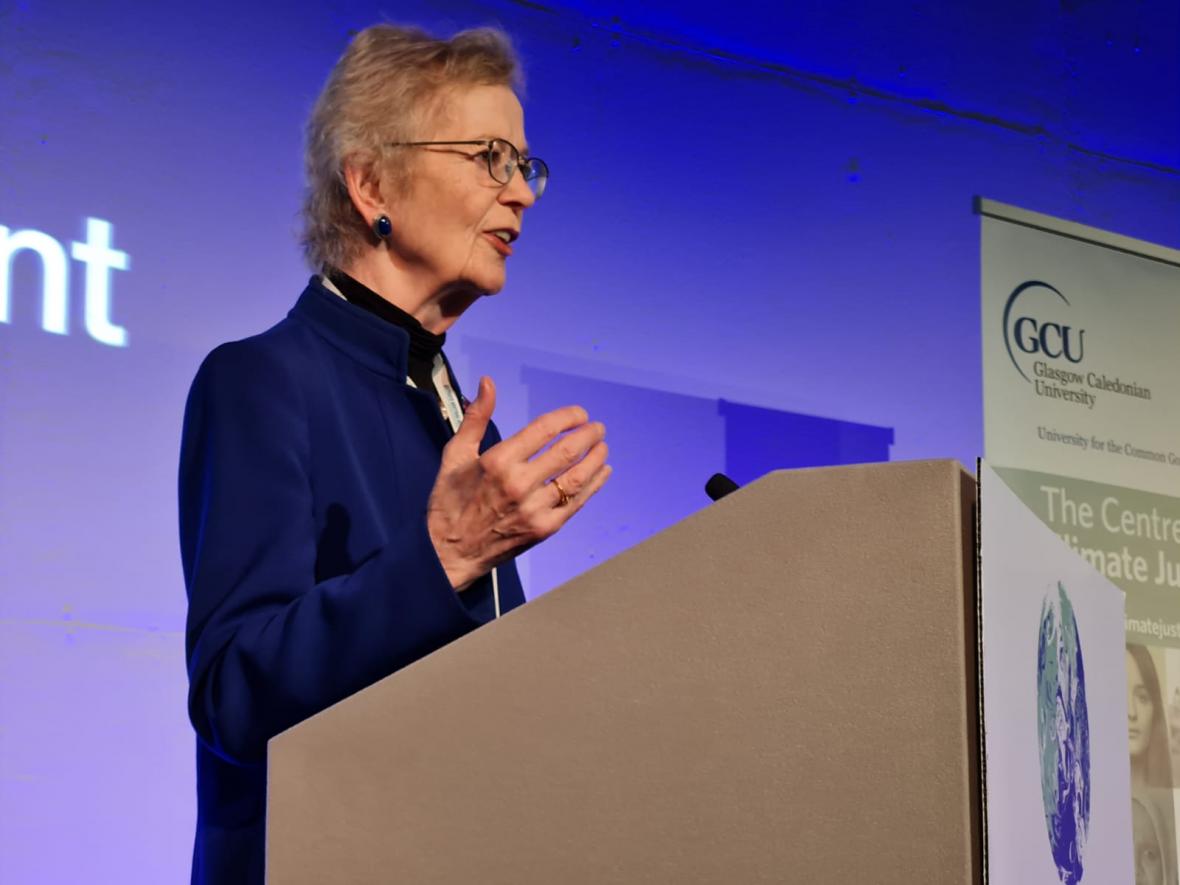 Mary Robinson urges for women's voices to be heard in climate change discussions and for rich nations to support climate-vulnerable nations.

Mary Robinson delivered this speech at the Mobilising Equitable, Just and Gender-Sensitive Climate Finance event at COP26 on 3 November 2021.

It is a great pleasure to be with you today at the Caledonian University, and I love the fact it does work on climate justice. I am going to talk about two issues that are both interlinked and close to my heart: climate justice and gender equality.

I do not need to tell you how important this COP26 is. The decisions we make will determine what kind of future we bestow on generations to come. And it should be absolutely clear to everyone that gender equality must be an integral part of that future.

The truth is, we are not equal in the face of the climate crisis. Poor and marginalised people in the Global South are not only hit more frequently by the impacts of climate change but they’re also hit hardest.

It is an unjust birth right of the rich and privileged to be protected from many of the effects of climate change. Or, maybe to put the argument on its head: it is a birth burden put on already vulnerable people. The effects of the climate crisis have been caused by those who have used up much of the carbon budget of the world to build their economies.

Responses to climate change need to be grounded in human rights and equality, and must ensure that the voices of the most vulnerable and marginalised are centred in solutions.

Today, we focus on the gendered injustice of the climate crisis and what we can do about it.

Women often have limited access to resources, and restricted rights and mobility compared with men. And too often, women’s voices are muted when decisions about policy and financial flows are made. But at the same time, women are uniquely positioned as fierce agents of change in responding to the climate crisis. Tahseen, you referenced my book on climate justice. There are 11 stories in this book, and many are about what women are doing about climate justice in their communities. I'll come back to one of the stories at the end.

It is women who are forced to find solutions and come up with new ways to feed their families when climate change takes its toll on our environment and ecosystems. It is women who must walk further to fetch water as dry seasons become longer. It is women who are more likely to die from pollution from smoky stoves. When disaster strikes, it is girls who are pulled out of school first to help struggling families make ends meet, and The Elders were very distressed that a number of them get pushed into early marriage, which we have campaigned against. It is women who are the last to eat, and the first to go without when there is not enough. The list goes on and on.

Simply put, gender norms affect everyone, everywhere. In our response to climate change, we need to question these unequal gender roles. Because as much as the world cannot afford to neglect the needs of half of the population, we cannot afford to squander the talents and potential of women in creating solutions.

It is not only unjust; it is also setting us up for failure. Applying a gender lens to climate finance is both the right thing to do and will lead to climate action that is better both for people and the planet.

I am encouraged that there is an increasing realisation that women drive adaptation, they drive resilience, they drive solutions, but we are not there yet.

A path to get there must include rich countries living up to their pledge to support climate vulnerable nations in their fight against climate change. The COVID-19 pandemic has shown us that countries can swiftly mobilise trillions of dollars in the rich world to respond to an emergency; it is clearly a question of political will. As you’ll recall, rich nations promised, now rich nations must deliver. It is said that we haven't met the  $100 billion commitment this year, 2021, but we are told it will be met in 2023.

Equally important, climate finance must be distributed in an equitable, gender-responsive and accessible way. Too often, climate finance is out of reach for the most vulnerable people in society, even if it is provided in their region.

We still have a lot of work to do to ensure that climate finance is directed to where it is needed the most and where it can have the greatest impact. Today, as many of you will know, only 25% of climate finance is directed towards adaptation and I think it is recoginsed at this COP that this must change, and only 13% for Least Developed Countries, and this too must change. And much of that is in the form of loans that must be re-paid – pushing countries further into debt! I listened to Mohammed bin Rashid discuss this yesterday – there must be climate resilience.

Only a third of climate finance takes into consideration the different needs of women and men – leaving two thirds completely “gender-blind”.

As my fellow Elders Ban Ki-moon and Ellen Johnson Sirleaf have both said in the past week: we must listen to the concerns of vulnerable countries and put climate adaptation at the heart of the negotiations here in Glasgow.

Investing in vulnerable people often means investing at a local level where communities can take a lead in decisions that affect them, and projects can be designed to respond to the immediate needs of vulnerable people, many of whom of course are women.

Our challenge at COP and beyond is to find ways to bring in women’s needs and experiences to bear on the policy and finance debates in what remains a male-dominated sphere.

There are many many examples of what women are achieving and how we will get an equitable world.

I want to leave you with the words of a remarkable woman in a very quiet low key way. Her name is Vu Thí Hien, and she was a professor in agriculture. She understood that women in Vietnam couldn’t participate unless she broke it down to a local level, and she headed a pioneering and community-led initiative that ensured that climate finance responded, and was accessible, to those it aimed to help. She told me:

“When you work with vulnerable and poor people, you must believe them, she insists. Poverty does not equate with stupidity. These people have their own knowledge, their own technology, their own systems. Not only do they contribute solutions, but they are the beneficiaries too. These are the people who can protect and save our planet.”

I was very glad yeterday that the deforestation project was given over $2.5 billion for indigenous people. I hope this will be a lesson on how to save the forest.

Thank you and I look forward to the discussion.

Mary Robinson explores the important role the legal community has to play to uphold human rights in the climate crisis.

Zeid Raad Al Hussein reiterates the need for global solutions to global problems, and the pivotal role of the multilateral system in addressing our shared challenges such as the climate crisis and the COVID-19 pandemic.
Opinions