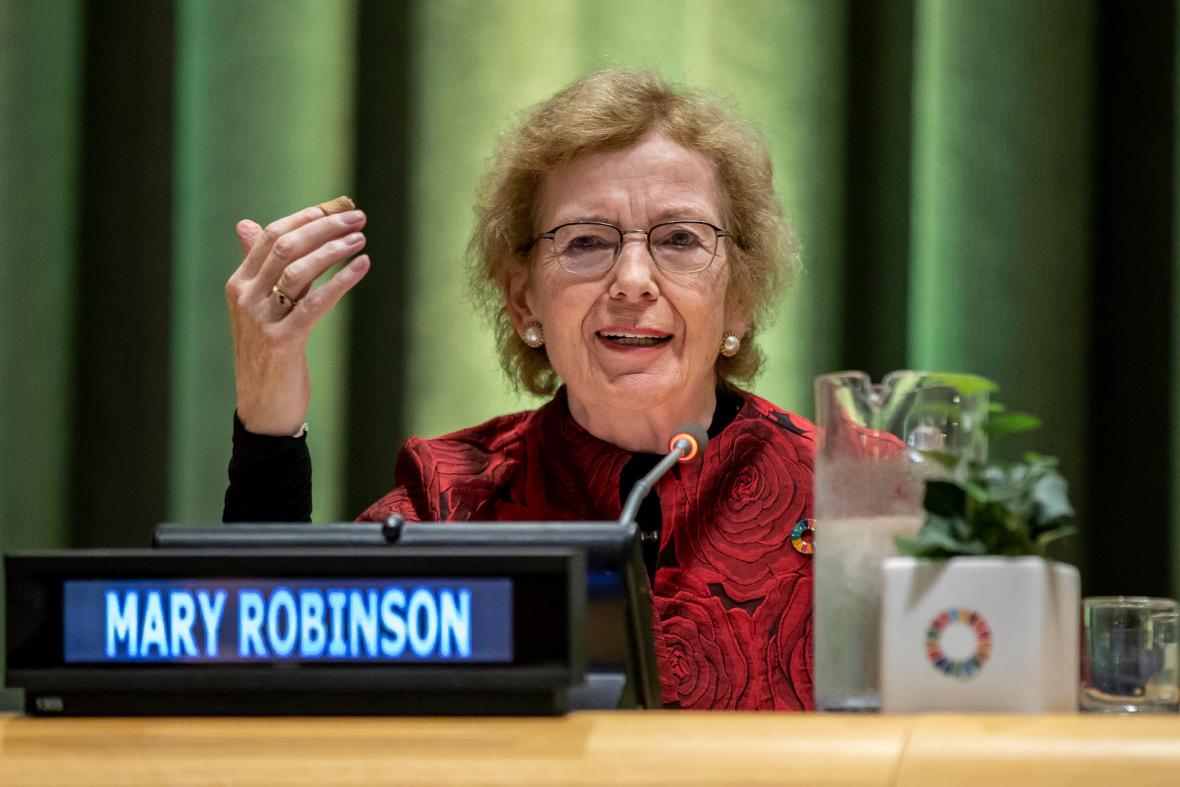 Mary Robinson addresses the human aspects of the Sustainable Development Goals and how they uphold and strengthen the rights of the most vulnerable.

Mary Robinson delivered this video message at an event organised by the Templeton World Charity Foundation on 14 October 2021.

It is a pleasure and a privilege to join you for this stimulating and timely discussion.

I am particularly glad that the focus of today’s discussions is the human character and the relationship between our individual and collective psychologies on the one hand, and the technical and political demands of the international development agenda on the other.

For me, these are two aspects of the same coin. The Sustainable Development Goals, adopted by the member states of the United Nations in 2015 in conjunction with the Paris Agreement on climate change, are intensely human and humane documents.

Too often this critical element can be overlooked in the jumble of technical indicators, institutional jargon and diplomatic communiqués that are the necessary handmaidens of delivery and implementation.

But we should never forget that the SDGs have us at their heart: human beings, flesh and blood, with hopes, fears and dreams. The Goals speak to our shared humanity and collective aspirations for a better and fairer world, not just for the present day but for future generations.

I would like to take this opportunity to pay tribute to Ban Ki-moon, the UN Secretary-General who oversaw the development and adoption of the Goals, who today works alongside me as a member of The Elders to further the causes of peace, justice and human rights worldwide.

The Goals that he championed imply responsibility at an individual level to live in a way that is thoughtful, empathetic and considerate to our brothers and sisters across the world, and the other species with whom we share this planet. Precisely the same logic and moral imperative also applies to the greatest existential threat of our age, the climate crisis.

The preamble to the UN’s 2030 Agenda for Development, with the 17 SDGs at its core, sets out this vision clearly and powerfully:

“We are resolved to free the human race from the tyranny of poverty and want and to heal and secure our planet. We are determined to take the bold and transformative steps which are urgently needed to shift the world onto a sustainable and resilient path. As we embark on this collective journey, we pledge that no one will be left behind.”

This mantra of “no one left behind” resonates even more strongly and poignantly when we consider everything that humanity has endured during the last eighteen months of the COVID-19 pandemic.

The rights at the heart of the Sustainable Development Goals, including the right to health, education, justice, equality and clean energy, are essential to enable all of our human family to flourish, but they will not be realised without vigilance and determination.

COVID-19 has shone a harsh light on existing inequalities and in many cases exacerbated the damage wrought to the social fabric and the life chances and health of the most vulnerable in our societies, including women and children.

I am particularly concerned about the gendered aspect to the pandemic’s impact, the disproportionate health and economic burden borne by women, many of whom were already in precarious situations before COVID-19.

Over my years in public life I have met many, many inspirational women and girls living in the most desperate of circumstances: victims of war and sexual violence in the Great Lakes region of Africa, schoolgirls who had managed to escape child marriage in India, and mothers living as refugees in Italy after surviving a perilous Mediterranean Sea crossing, to give just a few examples.

Their principled resilience at a very young age is an example to us all, especially when women’s rights are under renewed attack across the world – from Kabul in Afghanistan to Houston in Texas.

All of these women shared remarkable resilience, a determination to protect their families and immense talents in the face of hardship. They have exactly the same right to flourish as you or I, yet too often are denied this by an economic, social and political system that is weighted against them and perpetuates the privilege of wealthy elites.

The SDGs exist precisely to uphold and strengthen the rights of the most vulnerable.

For leaders and policymakers, the responsibility is clear: prioritise resources and define frameworks and processes across government to implement the Goals.

But those of us in civil society – especially in the prosperous nations of the Global North – have an equally important responsibility: to shine a spotlight on abuses, support grassroots activists in their local and national endeavours, amplify their voices and identify practical steps to deliver tangible change.

We have to internalise the political aspirations of the Goals and transmute them into our own patterns of thought, behaviour and interaction.

We need to champion the virtues of solidarity, compassion and forgiveness in the face of human misery and desperation, always adhering to the principles of shared humanity so wonderfully captured in the African concept of “Ubuntu”, which roughly translates as “I am because we are”.

Without this commitment, not only will the poor and the marginalised be denied their opportunity to flourish but our own moral integrity will wither, and our ability to help our own families and communities flourish will be compromised.

One way we can reach our goals is by drawing on the wisdom and experience of those who have either gone before us or stand alongside us today. For me, this includes inspirational men like Nelson Mandela and Kofi Annan – both of whom I had the great privilege of working with in my UN career and at The Elders – and courageous contemporary young female activists including Greta Thunberg, Vanessa Nakate and Xiye Bastida.

And in preparing these remarks, I was reminded of the words of the pioneering British feminist and environmentalist, Barbara Ward. In the early 1970s she wrote a prophetic book “Only One World” which included the following lines that apply just as much half a century later:

“The careful husbandry of the Earth is sine qua non for the survival of the human species, and for the creation of decent ways of life for all the people of the world.”

All of us have a duty to create these decent ways of life so all the peoples of the world can flourish to their fullest extent.

Events like this and the works of organisations like the Templeton World Charity Foundation and the Ekskaeret Foundation play a crucial role in developing our understanding of these multi-faceted challenges, and I wish you all every success in your valuable work in the months and years ahead. 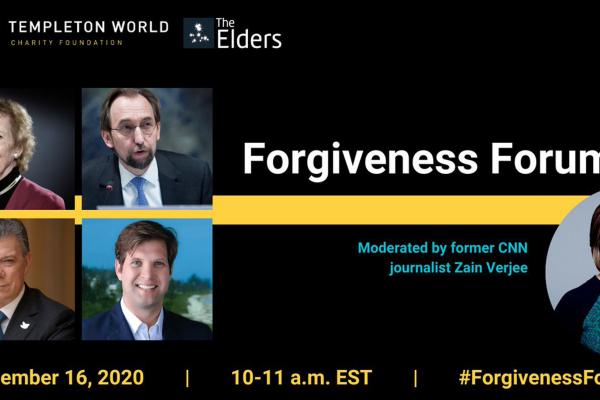 The Elders took part in the launch of the Forgiveness Forum, hosted by the Templeton World Charity Foundation.

Mary Robinson addresses the UN Security Council on its crucial role in preventing conflict, the need for nuclear non-proliferation, and the overhanging threat of climate change. 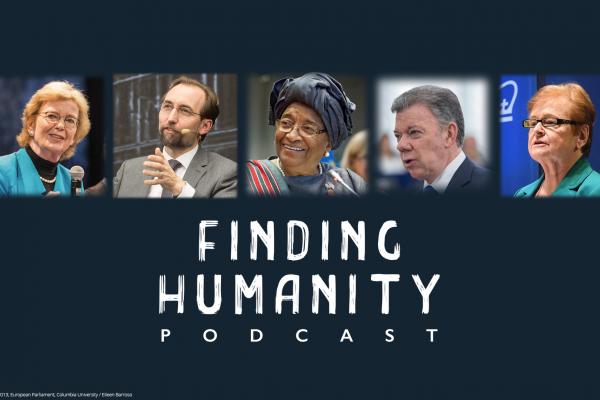 The Finding Humanity podcast explores the need for empathetic and principled leadership on some of the biggest challenges humanity is grappling with today.
Opinions