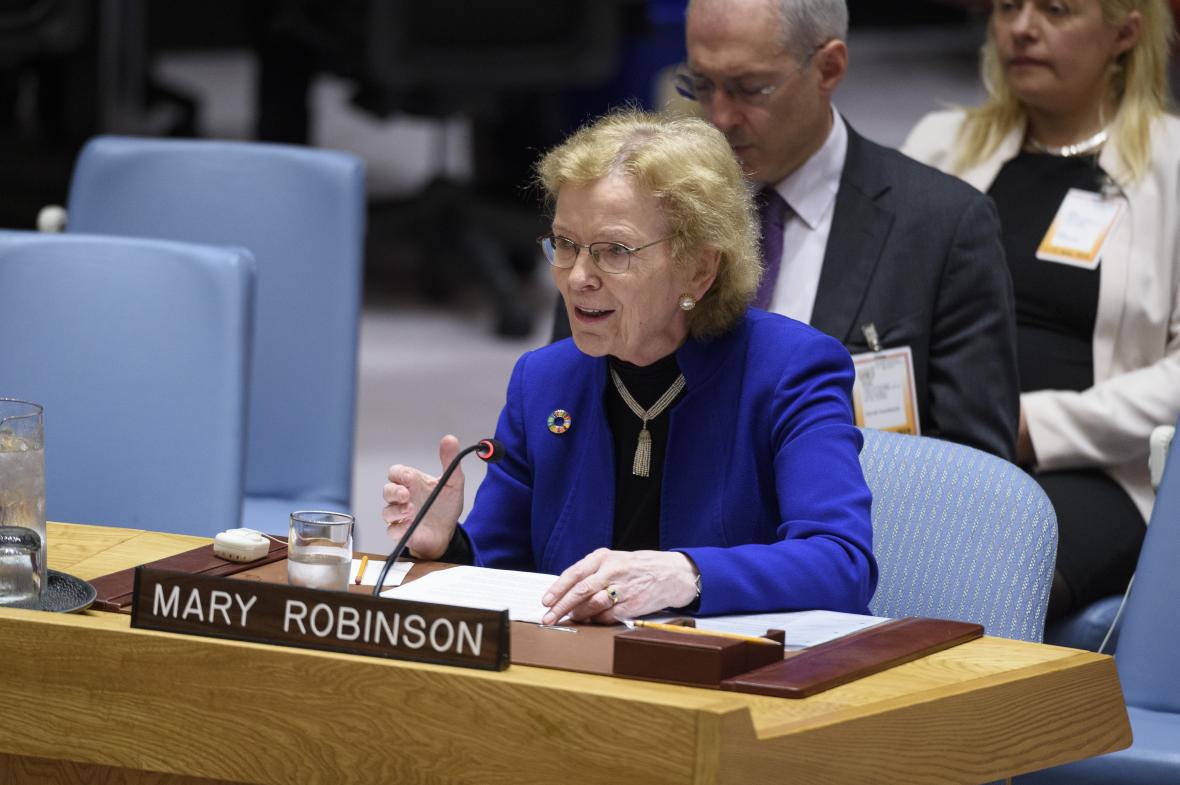 Mary Robinson addresses the UN Security Council on its crucial role in preventing conflict, on the need for nuclear non-proliferation, and the overhanging threat of climate change.

This speech was delivered during a briefing to the UN Security Council on 7 September 2021.

It is a privilege to brief you again as Chair of The Elders, and I thank the Government of Ireland for inviting us to address the Council.

I am honoured, too, to be here alongside my fellow Elders Lakhdar Brahimi, Ellen Johnson Sirleaf and Ernesto Zedillo. Lakhdar will focus particularly on Afghanistan, and I shall raise other issues of concern to The Elders.

But first I would like to share a memory of my visit to Afghanistan as UN High Commissioner for Human Rights in early March 2002. I met with Sima Simar, then Minister of Women’s Affairs, and Noeleen Heyzer, then head of UNIFEM, who had been helping about 95 women draw up their draft charter of women’s rights. I was surprised to find these women had been judges, lawyers, doctors, teachers, active in their community before the Taliban. They had decided to launch their charter on International Women’s Day in the cinema they used to go to before the Taliban. It had been destroyed, but the women cleared about 15 feet of rubble, and the UN provided the canvas roof cover. The UN also guaranteed it would be safe, so the women came without their burkas. On 8 March I recall looking down from the podium, together with Lakhdar, at the bearded men who had taken the first few rows. We saw a woman further back stand, praise Allah, and launch their Charter. It was an important reminder that women’s rights are not western rights. They are fundamental human rights that these Afghan women had reclaimed in accordance with their cultural values. In the almost 20 years since, hard-won gains in gender equality and women’s rights have been secured through constitutional, legislative and policy changes.

We cannot allow the women and girls of Afghanistan to be deprived of these rights, including the right to leave the country. Members of the Security Council cannot fail them. I was glad to see the letter Ireland and Mexico wrote to the President of the Security Council in August as Co-Chairs of the Security Council Informal Expert Group on Women, Peace and Security, reminding the Council of its responsibility in this. Security Council Resolution 2593 that was adopted on 30 August is a good first step. But the Council must now go further. I call in particular on China and Russia, in your dealings with the Taliban, to encourage them to recognise that the participation of women in society and the education of girls on an equal basis with boys, is non-negotiable and must be respected.

Collectively, you have all been entrusted with a powerful mandate, to act on behalf of the United Nations as the primary international body charged with maintaining international peace and security. As you know, this places heavy responsibilities on all members of the Council, to not only reflect the immediate national interests of your national capitals, but to also work collectively in the global interest. A united and purposeful Security Council is needed now more than ever.

COVID-19 has taken a heavy toll, first and foremost in human lives, but also economic growth, political momentum and social inequality, and has demonstrated manifold failures of international cooperation. We must be proactive in learning from these and in preparing for the next pandemic. The report of the Independent Panel on Pandemic Preparedness and Response has set out a pathway for strengthening the multilateral architecture on pandemic prevention and response. And The Elders have called on global leaders to make a Political Declaration during the UN General Assembly later this month to commit to implementing fully the report’s recommendations.

The Elders are also alarmed about the existential dangers posed by nuclear weapons, as recent years have seen the breakdown of arms control agreements, the emergence of dangerous new technologies and cyber warfare capabilities, and the serious risk of a new nuclear arms race taking hold amongst the nuclear powers. We are also concerned about the failure to date to secure a new agreement between the US and Iran on its nuclear programme. We reiterate our support for a full, unconditional return to the JCPOA.

The upcoming NPT Review Conference will be a critical moment for action. The non-nuclear states will be expecting the five recognised nuclear powers to demonstrate concrete progress on their NPT commitments to pursue disarmament in good faith. Ensuring a successful Review Conference should be a top priority for the Security Council, and we urge the Council to maintain the issue of nuclear weapons actively on its agenda. I am pleased that Ireland is organising a Council meeting later this month to mark the 25th anniversary of the opening for signature of the Comprehensive Nuclear-Test Ban Treaty, and urge the Council to use this opportunity to send a clear message of support for the treaty’s entry into force.

Urgency of action is equally needed on climate change, which is a threat multiplier to all the issues on your agenda. The latest science from the IPCC has clearly shown the risks posed to planetary stability and human survival. While this Council has already started to grapple with climate change as a security threat, I hope it will now engage more decisively, with a Resolution, as this is a core threat to international peace and security.

On the role of the Council in preventing and responding to violent conflict, I urge members to use the tools at their disposal. Article 34 of the UN Charter says: “The Security Council may investigate any dispute, or any situation which might lead to international friction or give rise to a dispute, in order to determine whether the continuance of the dispute or situation is likely to endanger the maintenance of international peace and security.”  This power of investigation should be used proactively by the Council to engage early in situations before large-scale violence breaks out and hits the international media.

On Tigray, the protection of women and girls must be a top priority as the conflict continues to escalate. The Council has been briefed on the severity of the humanitarian crisis and food insecurity that is directly resulting from the conflict, and on the horrific scale of human rights atrocities, including the use of sexual violence against women and girls as a weapon of war.

The Council must take action to incentivise the parties to negotiate a ceasefire – ending the fighting is the only way to cease the suffering. The Council could also consider making a visit to Ethiopia and Tigray, to focus attention on the conditions on the ground, and the urgent need for a political, not a military, solution.

A similar unity of purpose is needed on Myanmar, where, six months on from the military coup, the country remains in turmoil.  The people of Myanmar do not want a return to military rule.  Normalisation and acceptance of an unlawful coup is not a route to regional stability.  On the contrary, the military’s extension of the state of emergency and the continued, unlawful detention of the National League for Democracy’s political leadership risk-taking the country down a path of protracted civil conflict and cannot be tolerated.

This Council must support and strengthen – not hide behind – the role of ASEAN, which has so far been unable to progress the implementation of its five-point plan agreed in April. I note the reports that there may now be agreement by the military to a humanitarian ceasefire until the end of this year, following engagement by the new ASEAN Special Envoy, and urge all parties to seize this opportunity. Common ground between Council members can be found now on the need for strong action to ensure a comprehensive UN response to COVID-19 and the humanitarian crisis. The UN Secretary General’s Special Envoy should also be empowered to work with the new ASEAN Special Envoy to find a political solution to the crisis through confidence-building and dialogue between all parties. Council members with influence on the Tatmadaw have a particular duty to encourage them to open up to the possibility of dialogue.

And finally, on Israel-Palestine, the latest cycle of violent conflict this year has shown beyond doubt the need for a fresh approach by the international community that addresses root causes and is based on respect for international law. The Council has failed to address persistent violations of UNSCR 2334, allowing the parties’ actions to undermine prospects for peace and a two-state solution. It should reaffirm its commitment to the resolution’s terms and take strong action to hold parties accountable for violations.

Member states should also encourage all parties to cooperate with the ICC investigation into the Situation in Palestine, as part of their commitment to the rules-based international system.

On many of the issues I have just discussed, I recognise that real and serious divisions exist between Members of the Council and that internal political divisions have unfortunately led the Council to fall short of its responsibilities in many instances. Nevertheless, I urge all Council Members to return to the fundamental basis for your mandate and to work tirelessly to find common ground and build consensus wherever possible. Every Council Member should recognise that they have a common interest in upholding global peace, security and stability, and this ought to be a guiding principle for the Council’s work in the years ahead.

Lakhdar Brahimi addresses the UN Security Council on the precarious situation in Afghanistan and calls for unity within the international community to support the Afghan people. 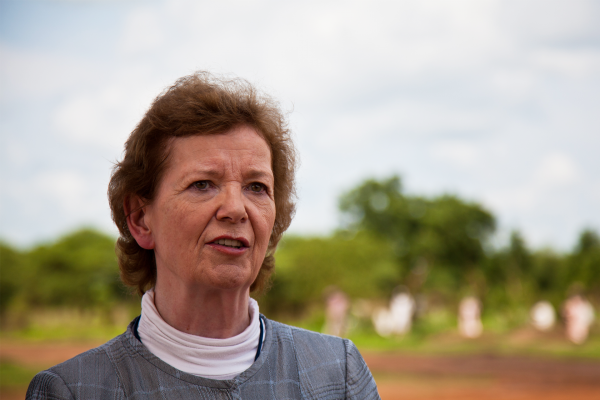 The Elders today called on world leaders to take direct, personal responsibility for leading efforts to prevent a future global pandemic and manage the continued threat posed by COVID-19

Ellen Johnson Sirleaf reflects on the recent report by the IPPPR and what is needed to ensure its recommendations are meaningfully acted upon by world leaders and international institutions.
Opinions